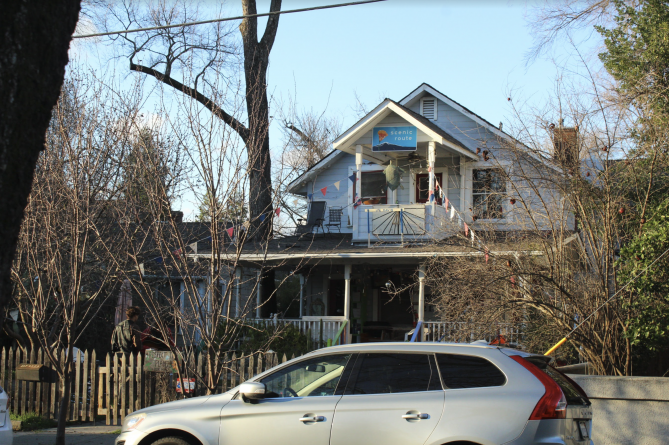 Since the 1990s, the Turtle House—located on Second St. and named for the turtle that hangs in its upstairs balcony—has served as a hub of entertainment and creativity for its residents and UC Davis students. Until recently, the cooperative living house (co-op) has drawn in members of the UC Davis community by hosting regular weekend events featuring local bands. With an average of 20 students living in the Turtle House at a time, it’s known to foster free expression and openness. Anya Sturm, a third-year mathematics major, heard about the Turtle House through her brother and friends and began living there in September 2020.

“Turtle House is historically this place that is […] whatever the community needs it to be in that moment,” Sturm said.

As a musician who practices American and Irish folk music, Sturm feels that the Turtle House has allowed her to be surrounded by others who share similar passions. Sturm added that some who are new to the Turtle House are quickly influenced by the interests of the other residents.

“I know housemates who came in not playing any music, and they’ve learned how to play drums and we’ve had these incredible dance sessions and recorded a bunch of stuff,” Sturm said. “I think it’s a good place [where] when you feel bored you can actually do something productive, which, when I started the pandemic not at the Turtle House, I was not able to do at all.”

Kobe Ward, a third-year psychology and sociology double major, learned about the Turtle House as a first-year by attending the parties they hosted and becoming involved in KDVS—UC Davis’ student-run radio station that has ties to the Turtle House. According to Ward, the Turtle House residents have maintained some of their routines, such as holding regular dinners, but haven’t been able to connect to the UC Davis community in the way they normally would.

“One thing that we do is family dinners, so Monday through Thursday somebody cooks and then we all eat,” Ward said. “We can’t invite people to come to those dinners anymore which is […] one of the cool ways we connect to the community.”

Joseph Robson, a fifth-year geology major, learned about the Turtle House as a second-year when he stopped in front of it during a bike ride to ask questions and was invited to have dinner with the residents on the spot.

In weekly meetings, Turtle House residents plan activities for the week, review the  applications of those showing interest in becoming new tenants and wrap up with group “appreciations,” where they take time to give each other positive feedback. According to Sturm, discussion around pandemic-related precautions has dominated the meetings lately.

“A pretty good portion of [the meetings] is taken up by COVID-related logistics now, and so it’s a space where you can ask for a mediator if you need to talk to someone specifically one-on-one and you guys are having problems,” Sturm said. “But I think we’ve mostly just been preemptive in addressing issues before they become anything big and problematic.”

According to Ward, living among so many people during the pandemic comes with anticipated risks.

“Generally living here, we have this assumed level of risk […] because there are just so many people,” Ward said.

To lower the risk of contracting COVID-19, the co-op residents have taken precautions when a known exposure has taken place, such as dividing the house into units and staying among small groups. Regular testing has also become part of Turtle House residents’ routines, according to Sturm.

“Most of us get tested once or twice a week,” Sturm said. “It definitely was a ‘hit the ground running’ with communication moving in because […] your life is at stake and you’re putting [it] in the hands of 19 people.”

Robson noted that the Turtle House’s process of finding new residents isn’t based on a rubric and that there are no prerequisites required to apply.

“We don’t try to find a mold of a person, we’re not looking for somebody that looks a certain way or has done a certain thing in the community or plays music or has a talent or anything like that,” Robson said. “There’s really no structure, it’s just a house and you can do what you want with it.”

In Sturm’s experience reviewing the applications of potential residents, the ones that stand out the most are from students whose personalities are a huge departure from her own.

“If I’m reading an application or I’m meeting someone and I think they’re so similar to me, of course I’m excited—you get excited when you meet someone who has similar interests,” Sturm said. “But the applications that I think everyone gets the most excited about is when you see someone who is so vastly different from yourself and I think that in that way, co-ops are really different from what people think.”

For Ward, life in the Turtle House has allowed her to feel comfortable exercising her eccentricities.

“It’s like an expanded comfort zone for being weird, it’s a way to feel [more comfortable] being a weirdo and then practice it for the rest of your life,” Ward said.
Written by: Lyra Farrell — features@theaggie.org