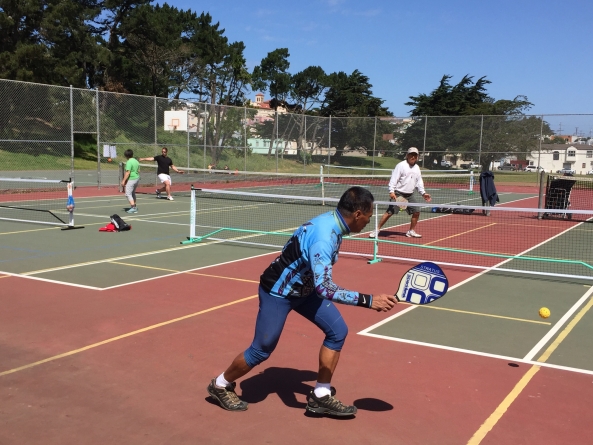 Nowadays, it’s hard to play the regular sports to which people are accustomed. With the pandemic still being a major factor, people have looked for alternative ways to stay active. But oftentimes, doing activities alone can get lonesome, which is why pickleball has become a popular alternative to compete against others while staying safe at the same time.

Pickleball has become a household name in recent years due to it’s fun nature. The rules are simple to follow and it’s a great way to involve friends or even family members from all age groups. Today, it is played all over the world, and during the pandemic it has served as a simple way to stay active while socially distancing.

The origin of the game dates all the way back to 1965 when it was founded by Washington State congressmen Joel Pritchard and Bill Bell. There was a badminton court on Pritchard’s property, but he didn’t have badminton equipment, so Bell and Pritchard improvised with a set of ping pong paddles and a wiffle ball. Shortly after, they created rules to the game and used it as a way to keep their families active.

By 1990, all 50 states in the U.S. were playing pickleball. Today, pickleball is a formal sport that doesn’t require much equipment—only a court, net, paddle and ball are needed to play. Although it may sound like tennis, Morgan Hall, a beginner in pickleball and a third-year anthropology major, finds a difference when it comes to these two sports.

“Tennis is a lot harder because there’s more running since the court is bigger,” Hall said. “Even though it looks like a tennis court, the court for pickleball is smaller.”

The standard pickleball court is 20 feet wide by 40 feet long, and it’s net is 34 inches tall and separates the court in two. Four courts can fit into one standard tennis court. Normally two or four people are on the court and people can play as singles or doubles.

“There are designated pickleball courts around that you can book, but really you can play almost anywhere with concrete,” said Katie Nelson, a fourth-year biotechnology major who has played pickleball for a couple of years. “Oftentimes my friends and I will chalk out a court on our local cul-de-sac and play for hours.”

Over the past decade more than three million Americans have participated in pickleball, whether competitive or recreational. In fact, it is currently considered the fastest growing sport in the U.S. because it’s simple rules make it easy for beginners to pick up quickly.

“It was easy to pick up,” Hall said. “I’m not very athletic and I was struggling at the beginning, but after a couple practice rounds I was able to get a rally going.”

“Pickleball appeals to everyone. You don’t have to be super athletic and a certain age to play,” Nelson said.

With the ongoing pandemic, many people struggle to find ways to stay fit and maintain proper social distancing protocols.

“These days it’s more important than ever to stay active and social to keep up with mental and physical health during these tough times,” Nelson said. “That being said, it’s often hard to motivate yourself to work out and unless you live with friends/family, it’s hard to stay safely social. Pickleball helps with both—it’s a great work out as well as being socially distanced.”

Even when times are difficult during COVID-19, pickleball is compatible with social distancing. It’s commonly played in doubles where people are closer to one another, but the good thing is that pickleball requires no physical contact.

“Compared to other sports where you have a lot of contact with each other, [in] pickleball you’re very rarely getting close to each other,” said Laura Gainor, a USA Pickleball representative. “You see everyone keeps a safe distance on the court, so you’re for the most part keeping that six-feet of separation.”

Measures that are being taken to prevent the spread of COVID-19 are changing exercise routines for many Americans. Exercising is especially important during times like this because it boosts the immune system, reduces stress and prevents future health risks. Now that gyms are closed in many areas and many sport events are being canceled, people have found an alternative way to stay active by playing pickleball, while also following precautions.

Pickleball is an easy game to understand and has become a mainstream sport. Even after the pandemic, there is enough to believe that the sport of pickleball will only continue to grow with people across all ages.  Written by: Katherin Raygoza—- sports@theaggie.org