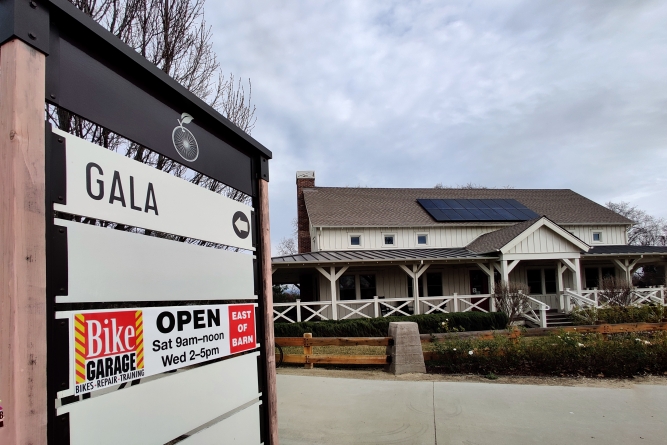 Photo Credits: Justin Han / Aggie. Bike Garage is a shop located at the Barn at the Cannery that offers free bike repairs, used bike sales, as well as training.

Local bicyclists explain the benefits of biking for health, happiness and the environment

The Bike Campaign opened a nonprofit, Bike Garage, on Dec. 5 in the Cannery on in addition to working at Douglas Middle School in Woodland.

The Bike Campaign Founder Maria Contreras Tebbutt was optimistic Davis residents would appreciate the Bike Garage, citing her experience during the pandemic.

“After the COVID-19 pandemic started, we were in a middle school in Woodland, and my phone was ringing off the hook,” Tebbutt said. “People were looking for bikes to buy, used bikes to buy or they wanted their bikes repaired.”

“Due to the pandemic, we closed all the way down for about three months,” Shearer said. “And then, following the protocol that the county or the city of Davis issued, we were required to have much reduced services, so we’ve seen an enormous decrease in our clientele.”

As the demand for bikes and bike services grew, the supply became severely constricted, and Tebbutt sought to fill the gap.

“Every Saturday, we would work out of my front yard,” Tebbutt said. “And all week long I would be taking phone calls and making appointments with people who wanted to come here to my front yard and test-ride bikes because they wanted to buy a bike.”

The Bike Campaign does not only sell and repair bikes; volunteer “Bike Buddies” also coach new riders about urban biking. Tebbutt noted that although many people know how to bike, they’re not always comfortable biking in a city.

“There are many people who have not used a bike since they were children who come to UC Davis,” Tebbutt said. “So what we want to do is to get them where they’re strong, confident riders. You need to know what your rights and responsibilities are. We want to share that with them, make them feel welcome and create a sense of community where we’re all sharing that kind of information and encouraging people to enjoy this lifestyle, because biking is definitely a lifestyle.”

Tebbutt mentioned the importance of visibility as an example of an urban biking skill.

The Bike Campaign’s mission is to encourage people to use biking as the primary mode of transportation, according to Tebbutt.

“We want to encourage people to bike more and drive less,”  Tebbutt said. “If you’re riding on the right side of the street and you have a bike helmet on, it’s safer than driving a car.”

Shearer also avoids driving, stating that he hasn’t had a car for one and a half years.

“The Davis Bike Collective has about eight ministers or core volunteers and a number of them, myself included, don’t use a car,” Shearer said. “We use bike trailers so that we can transport bicycles or parts. It’s exciting to try to switch, it’s healthy, good for the environment, it’s enjoyable—it’s a whole different way of living.”

Among other benefits of cycling, Tebbutt mentioned that it’s sustainable. Even after a bicycle is used beyond repair, it can be recycled, according to Tebbutt.

The Davis Bike Collective also recycles bike parts and repairs bikes so they are usable again, according to Shearer.

“We also recycle—that’s one of our main goals, to reuse everything we can,” Shearer said. “So if I’m out biking and I see an abandoned bike thrown in the dumpster, I’ll bring it out, I’ll take it to the Collective and rebuild it, so that it’ll be rideable again.”

A quality bike can also be used for many years, Tebbutt explained.

“A bike can live a long life if it’s not a Target or Walmart bike,” Tebbut said. “Those bikes are meant to wear out really fast. They’re kind of like junk bikes—you use it, it wears out and then you throw it away.”

More than any of these considerations, Tebbutt emphasized that he considers biking an enjoyable form of transportation.

“People really enjoy biking, and it’s probably because it kicks up the endorphins more than people might expect.”