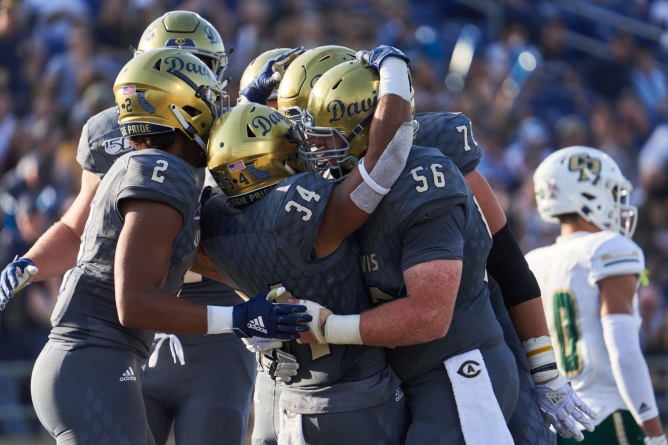 Photo Credits: Justin Han / Aggie. UC Davis running back Allonzo Gilliam (34) celebrates with teammates after scoring a touchdown for the Aggies during a game against the Cal Poly Mustangs in 2019.

After long months of waiting, the Aggies are prepared to get back onto the field once again for the first time in over a year

In what’s been a whirlwind of an offseason, the UC Davis football team is now on the cusp of returning to the gridiron. A layoff of over a year has the team itching to get back on the field and what awaits them is a season unlike any other.

“The hardest thing for us and for [the players] is the uncertainty,” said Dan Hawkins, the UC Davis football head coach. “It’s like some people say, ‘Don’t plan just prepare’ and we’re preparing. We’ll control what we know and the unknown you kind of have to let that go.”

The long offseason was one with many ups and downs, as changing county guidelines continued to shift the practices. Whether it was over Zoom, small groups or large practices, finding ways to stay connected with their old and new teammates was a big part of the Aggies’ offseason.

“It was very important for us to make sure that we were reaching out to the whole team,” said Bryce Rodgers, the defensive captain and a fifth-year psychology major. “I know the captains, we would stay in touch and talk about certain things. We would get groups going and we have other leaders that were making sure that every person on the team was being communicated with and nobody felt like they were on an island. During [COVID-19], where people might not be seeing too many people [or] people might not have been able to go back home to their family, you want to make sure that everybody feels not as lonely.”

After the National Collegiate Athletic Association (NCAA) announced their plans for a spring season of Football Championship Subdivision (FCS) back in September, many were skeptical about the odds of it happening. After the surge in COVID-19 cases during December, that doubt grew even larger. Nonetheless, 95 FCS teams are scheduled to play this spring, and even after all the questions and concerns, UC Davis is one of them.

“Coach [Hawkins] talked to us about having hope,” said Kooper Richardson, the offensive captain and a fifth-year communication major. “We never lost hope knowing we have such a great university here at Davis. We had a lot of faith that we would get it figured out at the end of the day.”

The Big Sky Conference announced their plans for a six-game season which featured two bye-weeks that would be available in the case of a possible postponement. Montana, Montana State, Northern Colorado, Sacramento State and Portland State will not participate in this spring’s conference matchups, leaving it up to eight teams as they battle for a Big Sky Conference title. With this year’s FCS playoffs being only 16 teams instead of the usual 24, there will only be five at-large bids for the playoffs, making it even more crucial to win the conference.

Right off the bat, UC Davis’ season was put on hold. Cal Poly’s football program paused for a total of 17 days due to COVID-19 concerns, and both sides agreed to reschedule their Feb. 27 game. Because of that, UC Davis’ season opener will be delayed by one week, as they begin their journey against the Idaho Vandals on Mar. 6, in Moscow, ID. The last time these two teams matched up was in September 2018, when the Aggies handled the Vandals by a final score of 44-21 in Davis, CA. Being that Idaho has the luxury of playing a game before this matchup, there may be a rust factor that may play into the outcome of this game.

After their matchup against Idaho, the Aggies will be back on the road once again the following week, as they travel to take on the Weber State Wildcats in Ogden, UT. The two teams met in October 2019 at UC Davis Health Stadium in a contest that saw the Aggies struggle on offense, not being able to keep up with the scoring and losing by a score of 36-20. After making last year’s playoffs, the Wildcats are poised to do so again, making the stakes for this game even higher.

After two straight road games to start the modified season, the Aggies will finally host their home opener against the Cal Poly Mustangs on March 20 at UC Davis Health Stadium—the game that was postponed and originally scheduled for Feb. 27. UC Davis has won the last three meetings between the two teams and with this game coming in the middle of the season for both sides, it will be one to watch as they will have a better grasp on everything and the rust will almost entirely gone.

The Aggies will remain at home for the following two weeks as they play host to the Idaho State Bengals and the Eastern Washington, both of whom they had recent memorable battles with. In one of the most notable UC Davis football games, the Aggies took down the Bengals in a 44-37 overtime thriller on homecoming. UC Davis trailed by 15 with 13 minutes remaining in the fourth quarter, but managed to string off 22 unanswered points to pull off the shocker. Later on that season, the Aggies once again found themselves in an unforgettable game—this time against Eastern Washington. After taking the lead with 1:13 remaining in the fourth, the Aggies gave up the go-ahead touchdown with :26 remaining, ending their magical 2018 season.

In what will be the wrap-up of this short football season, the Aggies will once again see the Cal Poly Mustangs, but this time in San Luis Obispo. In the most recent Big Sky schedule release, they announced that all teams will play their closest drivable opponent in their first and last game.

The preparation heading into this unorthodox season was one very different from others for obvious reasons. Those preparations took another turn, as offensive coordinator Tim Plough was hired by Boise State University, ending his productive time with the Aggies. There were some questions on whether they would be able to instill the new offensive coordinator, Cody Hawkins, and his changes with just 50 days before kickoff. But as head coach Dan put it, there wasn’t much change needed.

“The beauty of it is that we have a system here,” Coach Dan Hawkins said. “Cody will have a few tweaks that he likes that are different from Plough. The system of how we do it does not change. We didn’t have to go to square one to re-learn our offense.”

With Plough leaving, it added another layer of uncertainty on the offense, which lost its star quarterback of recent years Jake Maier to graduation. Maier’s production was record-breaking and while his historic production may not be replicated, there is optimism in the offense.

“We have a great connection with all of our [quarterbacks],” Richardson said. “Obviously with Jake not being here, it definitely sucks because he was one of my best friends. Not having him back there is definitely different. But, I’m still friends with everyone else and we feel very comfortable with any [quarterback] that is back there. Our [quarterback] room is unbelievable. We have so many great guys.”

It remains to be seen how the long layoff will ultimately affect the team, but with a six-game season, the margin for error is very slim. The possibility of reaching the playoffs with an at-large bid has only been minimized, so with many big games against conference favorites, the Aggies will have their work cut out for them.

“Just being able to get on the field for any amount of time has been a real blessing,” Rodgers said. “I think however long the season is going to be, I’m just really appreciative to get the time to be out here.”

In the end, after so much uncertainty surrounding whether this season would actually happen, the players feel it within arms reach and are amped up. With kickoff right around the corner, there is a sense of satisfaction and appreciation in returning to the field again, but the ultimate goal to win remains.
Written by: Omar Navarro — sports@theaggie.org