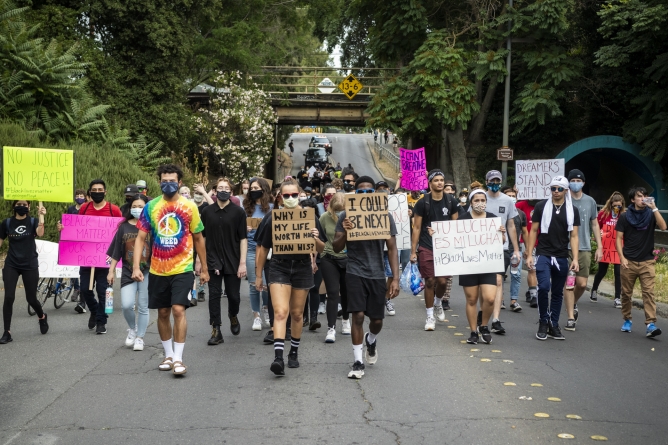 America has a long road ahead before truly uprooting issues of police brutality, white supremacy and systemic racism

Last year, the deaths of George Floyd, Breonna Taylor, Ahmaud Arbery and many others underscored the pervasiveness of racial inequality and police brutality in America—it also marked an important year for the Black Lives Matter (BLM) movement. In May 2020 alone, thousands of Americans rallied in solidarity with the Black community, protesting racism, demanding criminal justice and police reform and calling for long-term change. In addition to demonstrations spreading across major cities, the Black community’s call for action was also echoed on social media. For a while, it seemed impossible to scroll through Instagram or Twitter without seeing posts calling out racism and threads highlighting what can be done to help.

However, it appears as though people are already beginning to move on from their activism. Profile pictures that were once blacked out in solidarity with the movement have slowly been deleted, and links to petitions on Instagram bios have been removed. Many have also taken President Joe Biden’s 2020 win as a sigh of relief for Black lives, although America has a long road ahead before truly uprooting issues of police brutality, white supremacy and systemic racism. As a new year rolled around and we once again welcomed Black History Month in February, it’s time we remind ourselves that upholding racial equality and civil rights are not trends to participate in for a few months before returning to business as usual. Black lives always matter, and we must continue to do our part in demanding greater equality.

The BLM movement was founded by activists Alicia Garza, Patrisse Cullors and Opal Tometi in July 2013 following the acquittal of policeman George Zimmerman in the shooting of Trayvon Martin. Although the movement has existed for nearly a decade, 2020 was arguably its most momentous year with successful developments in police reform, the removal of racist symbols from state flags and increasing international solidarity for Black lives everywhere.

Philadelphia, Los Angeles and Baltimore are just a few of the cities that have reduced funding for police departments by over hundreds of millions of dollars, choosing instead to divert funds to mental health programs, education services, increasing affordable housing and tackling homelessness. In many cities, policies were passed to ban the use of chokeholds by law enforcement—the very tactic that led to George Floyd’s death—as well as the institution of Breonna’s Law in Louisville, KY, which bans “no-knock” search warrants. Statues honoring Confederate leaders, colonizers and slaveholders have been removed, including those of Confederate General Stonewall Jackson in Richmond, VA and the Athens Confederate Monument in Athens, GA.

Moreover, pressure to uproot racist sentiments caused sports teams and food products to change their names. Just recently, PepsiCo announced that they would be renaming the Aunt Jemima pancake mix and syrup brand to “Pearl Milling Company,” in addition to pledging $5 million to “support the Black community.” The momentum from last year’s BLM protests also prompted people outside of the U.S. to reflect on their own issues of racism and police brutality, from protestors in the U.K. toppling the statue of slave trader Edward Colston to viral Twitter threads about systemic racism and colorism against Papuans trending in Indonesia.

Throughout 2020, the BLM movement incited important public conversations around racism and efforts to address individual prejudice, as well as nationwide changes in policing, criminal justice and government. The fight for racial equality, however, is far from over. Mass incarceration and sentencing disparities continue to disproportionately harm Black people. Qualified immunity remains a factor in facilitating police misconduct. Many victims of police brutality, such as Jacob Blake, Tony McDade and Elijah McClain, have still not seen justice.

In order to truly create long-term change, we must hold our leaders to a higher standard. Centuries of white supremacy and systemic racism will not disappear after just one year of protests and petition-signing. This can only be done through consistent, long-term efforts from both white and Black communities to address individual and structural racism. As lawyer and civil rights activist Derrick Bell once said, “Black people achieve civil rights victories only when white and Black interests converge.” Hopefully, 2021 will mark a year where positive change is not presupposed on tragedy and national outrage. Black lives still matter—let’s not forget.