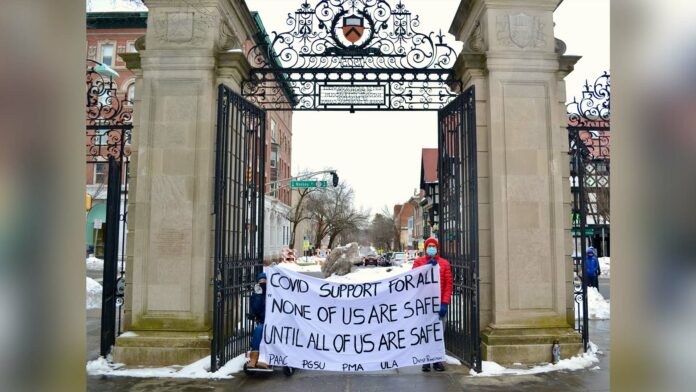 Activist groups at Princeton University organized a protest on Feb. 13 calling for community-wide COVID-19 resources like those offered at UC Davis. The protest, planned only two weeks prior, had about 200 attendees who came out to show their support for demands to expand COVID-19 resources.

PMA was founded in March 2020 at the height of the COVID-19 pandemic.

“Princeton Mutual Aid was formed to try to help [undocumented and immigrant populations in Princeton] and try to bridge the divide between the university and non-university communities and to try to organize to build power for the latter,” Somayaji said.

COVID-19 services are abundant for university-affiliated people. Like UC Davis, Princeton currently offers weekly asymptomatic COVID-19 saliva testing for students, faculty and staff. There is also contact tracing and quarantine housing available to those affiliated with the university. Princeton will also be distributing vaccines to this population.

“Essentially, the demands are to extend the university’s services around coronavirus to Princeton, but also the four surrounding municipalities,” Somayaji said. “Coronavirus does not stop at the gates of Princeton. This is a public health issue, and if the university has a testing lab that has the capacity to test thousands per day, as it does, then it should extend that arm to the whole community.”

Somayaji described expansion to the greater community as “the moral thing to do.” He said that the university is turning its back on vulnerable populations.

“The university should not be withholding services from those who don’t have medical insurance or are underinsured or those that have dubious immigration status,” Somayaji said. “A lot of the time, those people don’t have incentive to go get tested because it’s going to cost $100 every single time.”

Princeton brought undergraduate students back to campus for spring semester with COVID-19 regulations. Activists said that they were unhappy with how the university came to this decision, according to Somayaji and Marc Schorin, a third-year undergraduate French major, who said that democratic decision-making is at the core of the protest’s demands.

“They decided that without any input,” Schorin said. “They just said, you know, thousands of people can come back to the town without consulting townspeople directly.”

The Princeton Municipal Town Board of Health held a session where it was possible to make a public comment, but there was no possibility to follow up, according to Somayaji.

“The enormously consequential decision to bring undergraduates back, especially to a college town where things are relatively close together, introduces a whole lot of risk that the public is going to suffer from, especially because undergraduates are more uninhibited than the average adult,” Somayaji said,

When UC Davis made the decision to bring undergraduate students to campus in the fall, the university responded to concerns about students infecting community members.

“So, we were exploring different ways of testing, contact tracing and isolating the students according to whatever the public health guidance was at the time,” Chancellor Gary May said. “We had this proposal from Professor Michelmore in the Genome Center that had this really unique and innovative approach to doing the testing using […] PCR tests. We had some philanthropic interests that wanted to help us. We had some internal resources and the CARES Act [money]. The city had resources. We put this program together, and it’s just been very, very successful. We’re very pleased with it.”

UC Davis’ unique testing program, available to the near 70,000 residents of Davis, has received national recognition in the past few weeks. The program was projected to cost $38 million. Princeton’s community is less than half of the size of Davis’.

In response to the six demands of the activist groups who organized the protest, Princeton Deputy Vice President of Communications and University Spokesperson Ben Chang

noted that Princeton is a private institution that is not equipped with a medical school, unlike UC Davis. According to Chang, this means there are issues with legally using private funds to provide public services and that the university’s first priority is operating as an educational institution, not as a “health care provider.”

Somayaji and Schorin, however, pointed to Princeton’s $26 billion endowment as a way to afford securing the legality of COVID-19 testing and safety precautions.

“[The administration] says the reason they have not been giving the test [to the greater community] is because of licensing issues,” Somayaji said. “Princeton has a $26 billion endowment. They have quite a well-staffed-out legal team. They also contract with many high-power legal firms, out of house. They have the resources to ascertain the legality of something like this, if they had the will do it.”

The university has one clinic which will now offer limited testing for the greater community.

“We are looking to force their hand,” Schorin said. “We are not trying to reach a compromise, as these are things that are necessary for the lives of people here now. Again, it’s a great thing now that there is some availability, but it’s not what we were demanding.”

May has spoken with administration at the University of Illinois at Urbana–Champaign about the UC Davis testing model, and other university leaders have visited campus. UC Davis has also assisted sister UC campuses, such as Merced, by providing them with testing.

May said that he cannot make an informed comment on the circumstances at Princeton.

“We’re very happy with what we’ve been able to do with Healthy UC Davis Together here,” May said. “We think it’s been effective. We’re interested in trying to explore ways to broaden that effort to the broader Yolo County—if we can. I’m sure that Princeton University leadership is looking for solutions to do the best they can for their community given resource constraints that they might have.”

Schorin said he doesn’t think the university is doing all that they can.

“There is a great deal of resentment against Princeton University within the town,” Schorin said. “The university may deny that publicly. They are very eager to show the amount of money they’re spending on the municipalities—they gave a lot of money to the police department and fire department.”