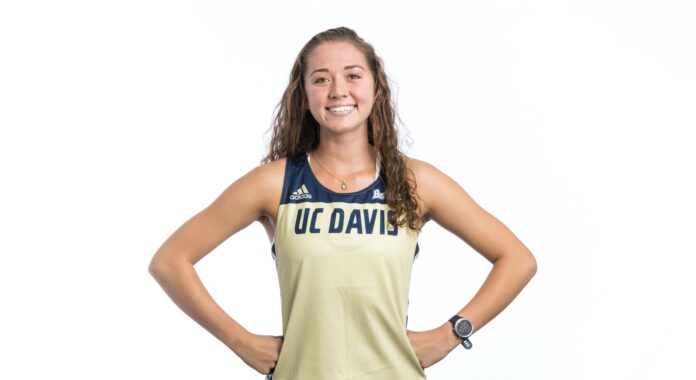 After months of postponed seasons, competitions for many sports such as track and field have commenced. As her season returns to a more normal schedule, Alexa Bolanos, a third-year sociology—organizational studies with an emphasis in business and communication double major, discussed her daily activities as an active long-distance track and cross country runner as she prepares for her track season.

Bolanos begins her mornings early, usually waking up between 6:45-7:00 a.m. She likes to have a slow start while she drinks coffee, catches up on emails and completes class assignments. Currently, her schedule revolves around her 3:00 p.m. afternoon practices, and she tends to take most of her classes in the morning.

For breakfast, Bolanos tries to have a well-balanced and filling meal that always includes coffee and ranges from avocado toast, oatmeal or peanut butter and banana toast. For Bolanos, it is especially important to eat a satisfying, high-calorie breakfast as afternoon practice can make it difficult to eat a heavier lunch. As an athlete, Bolanos said, it is necessary to eat healthy meals because it impacts her productivity and achievements on the track.

“Nutrition is a huge part obviously in sports and especially running,” Bolanos said. “That’s definitely something that we have to prioritize as it directly correlates to our performance at practice and in racing.”

She spends the morning and early afternoon catching up on work before heading to the training room where she prepares for her afternoon practice. As a long-distance runner for UC Davis, Bolanos usually runs 6k races for cross country in the fall season and pivots to mid-distance races like the 800s, 1500s and sometimes the 3k for track and field in the spring.

Due to her constant training and year-round preparations, Bolanos said that her workouts have not changed much during the pandemic. For her, the largest shift was when her cross country season was canceled in the fall and the team had to quickly pivot to begin training for track. When returning to Davis after Spring Quarter in 2020, Bolanos also had to transition from training on her own to practicing with her teammates with restrictions and regulations due to the pandemic.

When her afternoon training concludes, Bolanos returns back to her home where she makes dinner, spends time with her roommates and finishes her homework. According to Bolanos, dinner is important after strenuous practices. In order to have nourishing meals, Bolanos determines what she wants to make each week and prepares her meals in advance.

Due to regular training, she emphasized the importance of consistently eating healthy throughout the year.

“I try to keep a balanced diet year-round,” Bolanos said. “[There isn’t] really off season with track and cross country.”

After dinner, she takes time to relax, complete her coursework and stretch after practice. Ideally, she is in bed before 10 p.m. in order to be well-rested in the morning.

According to Bolanos, she and her teammates are excited to resume racing as the wait has made them more motivated during practice.

“Just having practice and races put on the schedule has definitely increased all of our excitement and love for the sport again in a competitive way,” Bolanos said.

During the pandemic, Bolanos stated that running became an important outlet for her.

“Being able to [practice], even with so much uncertainty around us, was really important,” Bolanos said. “[It] refueled our love for the sport and reminded us that we are passionate about it and that we don’t always need races to be reminded of that.”

Until recently, Bolanos’ only form of competition was inter-team racing which featured competitiveness but, according to her, did not sufficiently prepare the team for competition. As she begins to race again, she noted that she and her teammates are having to adjust to competing after not participating in formal races for months.

“I think it is a little bit of a shock to the system and also just daunting,” Bolanos said. “You’re going into a stadium with other athletes that you don’t know where they’ve been necessarily. Obviously there are a lot of safety protocols with COVID-19 so you can take comfort in that, but it still is a foreign feeling since none of us have been in that environment in quite a while.”

Bolanos stated that competition is currently limited to tournaments to which the team can drive. Flying is not permitted, so the team must drive to places as far as San Diego in order to compete. To maintain further safety, a negative COVID-19 test is required 72 hours prior to competition in addition to weekly COVID-19 tests.

A year into the pandemic, Bolanos said that many activities, including team practice, have grounded her. Despite her busy schedule, she tries to prioritize self-care and movie nights with her roommates. In addition, through her sport, she has gained a community of friends who have provided solidarity and support.

“Having a good community of people that support you and also have similar passions to you is really helpful,” Bolanos said. “I know all my teammates are going through the same kind of experience and will have the same hardships to some extent.”

Though sports are a significant aspect of her life, Bolanos also emphasized the importance of maintaining friendships and balancing schoolwork with team practice.

“Just making time for yourself and knowing that there is more to college life than just the sport that we do [is important],” Bolanos said. “Knowing that even though that is such a big aspect, it’s not the only aspect for me.”