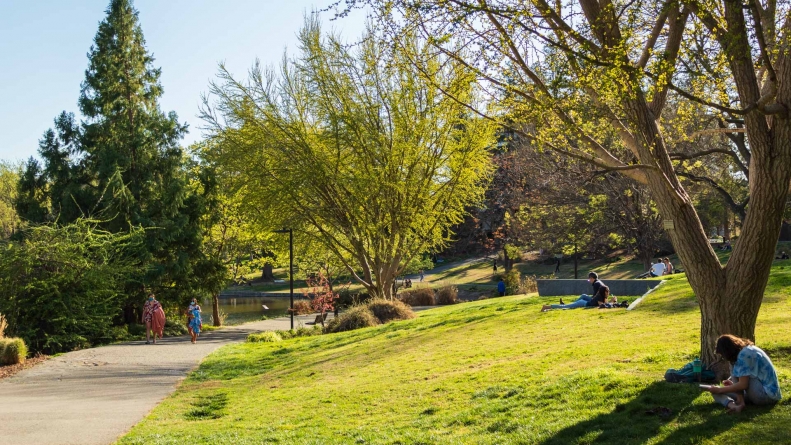 With blooming florals and lush greenery, the spring season is rapidly approaching and promises to bring new plants and animals to the Davis area.

Chase Kautz, a sustainable horticulture apprentice at the UC Davis Arboretum and Public Garden, discussed the plants that will come into bloom in the next few weeks. Kautz listed redbuds (Cercis occidentalis), manzanitas (Arctostaphylos) and California poppies (Eschscholzia californica), stating that visitors will be able to spot the different colors of the redbuds, California lilacs and oaks when passing by the Arboretum.

“[Redbuds] can be found mostly in our Redbud and Foothill Collections and bloom with big displays of pink (and sometimes white) flowers from late February to April,” Kautz said via email. “California lilacs (Ceanothus spp.) are putting on big blooms this time of year in blue, white and purple. Most of our valley oaks (Quercus lobata) and coast live oaks (Quercus agrifolia) are putting out greenish-yellow catkins en masse and releasing a lot of pollen into the spring winds.”

Nina Suzuki, the Arboretum Waterway Steward, similarly stated how the bold colors will be seen with the blossoming of spring flowers.

In terms of native Davis plants, Kautz mentioned valley oaks and several native wetland plants throughout the waterway including rushes, willows and California sedges. The center of the Arboretum is home to the leather root (Hoita macrostachya) and cobwebby hedge nettle (Stachys albens), unique plants that are sourced from the local Putah Creek watershed or Yolo Bypass.

Kautz also said that visitors can catch a rare view of the California pipevine plant which blossoms during this time of year.

“A notable but difficult-to-see plant [that] we have in the Arboretum [is the] California pipevine (Aristolochia californica),” Kautz said via email. “This is a vine native to riparian forests throughout the Sacramento Valley, and this time of year it puts out small, extremely unique and stunning maroon lantern or pipe-like flowers. It can be found in the Mary Wattis Brown Garden to the west of the footbridge growing in shrubs along the waterway.”

The California pipevine, according to Kautz, can also be spotted along the bike path that aligns with the west side of the train underpass and marks the west end of the Arboretum.

With spring just around the corner, Emilyw Griswold, Director of GATEway Horticulture and Teaching Gardens, said the plant she is looking forward to the most is the valley oak.

“I love seeing the first new leaves on the valley oak trees,” Griswold said. “They’re lacey and delicate with glistening silver hairs and a hint of pink when they first emerge. There’s so much to appreciate if you just stop to look more closely at the details around you.”

To view these budding plants, Andrew Fulks, an assistant director at the Arboretum, recommends external applications, maps and the Arboretum site to gain more knowledge of the scenery.

“Be sure to download the Arboretum visitor map to see the location of the various garden collections,” Fulks said. “Many of the plants have labels, but if not, there are phone apps, like the Seek app, that can be used for identification. We are working on a web-based interface that visitors will be able to use to see the locations and species of each plant in the Arboretum.”

Davis will also experience an influx of animals as they begin to migrate and explore larger parts of the area. Fulks stated that ducks, squirrels and turtles are most common but also noted the appearance of green herons, egrets and wood ducks. Kautz mentioned that during the spring, however,  many of these animals are in breeding season and will be seen in smaller packs while also showcasing mating habits.

“Right now, male mallards are pursuing females, so you will see one or more males following a female around trying to mate,” Kautz said via email. “The same pattern can be seen with fox squirrels. Male turkeys can be seen displaying their large tail feathers to females in [an] effort to be chosen as a mate as well.”

With scrub jays and other small birds, Kautz stated that they are currently nesting and can be seen collecting nest materials or insects to feed their young. Kautz further explained that turtles are typically visible in the lowest level of the waterway, basking on logs or banks of water.

Jenna Turpin, a third-year wildlife, fish and conservation biology major and the primary leader of the UC Davis chapter of The Wildlife Society, anticipates tending to these nesting birds while she works with the Putah Creek Nestbox Project.

“During Spring Quarter, I band cavity nesting birds for the Putah Creek Nestbox Project,” Turpin said. “I always look forward to seeing the Tree Swallows, Western Bluebirds, House Wrens, Ash-throated Flycatchers and White-breasted Nuthatches that occupy the nest boxes we put up as a part of the project. Keep an eye out for our nest boxes hanging in trees in the Arboretum, and see if you can spot the parents flying in and out.”

“The pipevine Swallowtail Butterfly is another special one to look out for,” Griswold said. “They have black and iridescent blue wings with orange spots. We have made a special point of planting pipevine to provide more habitat for them.”

To further discover and identify these animals, Fulks recommended downloading a bird guide on one’s phone and bringing a pair of binoculars for closer, undisturbed viewing.

Turpin also recommended searching for the Yellow-billed Magpie, an animal endemic to California. This species follows a unique courting and mating procedure after building their nests.

“The female will beg for food, and the male will start feeding her two days before her first egg is laid,” Turpin said. “The male’s courtship display involves circling around his female with puffed feathers and standing upright while calling in a way that sounds like a bubbly song. Following courtship, the pair will finally mate and lay their eggs. When hatched after 18 to 19 days, the nestlings are raised and cared for by their parents for two months. Then, by the end of spring, the nestlings will be out all on their own.”

According to Turpin, the Yellow-billed Magpies can be found among the oak trees within the Arboretum and can be identified by their size and color.

“If you see a black-and-white bird a little smaller than a crow, it might be a Yellow-billed Magpie,” Turpin said. “You can further verify you are looking at one by their very long, iridescent blue-black tail and yellow beak.”

With the new animals and plants emerging, Turpin stated that we need to take proper precautions when viewing nature. She said visitors should stay on the trails to ensure the preservation and continuation of plant growth in addition to maintaining distance between themselves and the animals they may see.

“Anytime you are viewing wildlife, it is important to remember they are wild,” Turpin said. “Please give them space and keep your distance.”Written by: Farrah Ballou — features@theaggie.org