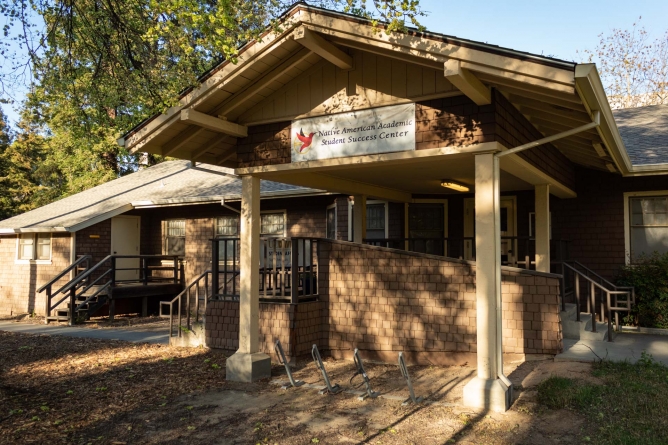 Tori McConnell, a fourth-year Native American studies major from the Yurok and Karuk Tribes of Northern California is the student director of the American Indian Student Recruitment and Retention (AIRR) Center. In 2019, she helped to form the Native American and Indigenous Advisory Committee to the Chancellor and is currently serving in her second term.

In 2019, UC Davis released a land acknowledgement statement in which the university “pays homage to the indigenous people and land on which the Davis campus is located.” In McConnell’s opinion, however, not enough is done by the university to acknowledge the history of the land it occupies.

“[There’s a] longstanding trope that Native American people are of the past and aren’t even here anymore,” McConnell said. “This university is here because of that, it sits on Native land and it barely does anything to actively make up for or pay any kind of reparation for sitting on this land.”

According to McConnell, UC Davis’ Native American community has been subjected to problematic instances overseen by the university in the past. For example, in 2019, the Manetti Shrem museum held an exhibit that was “extremely offensive,” in McConnell’s words, to the Native American student community and to Native American elders and did not respond to the dismay expressed.

“They refused to take it down and they wouldn’t listen to the community, […] they just left it up,” McConnell said. “To this day, they haven’t offered an apology and they haven’t done anything to try to make up for that terrible display and the harm that they did.”

In response to this event, McConnell took part in forming a committee that would aim to increase communication with the university and prevent similar issues from surfacing.

“Having an established committee […] is a change within the institution, it’s hardly anything, but it’s a step in the right direction,” McConnell said. “All of that came about because our community was upset and traumatized about the [incidence] with the Manetti Shrem.”

Marialuisa Kemmerle, a fourth-year Native American studies major from the Cherokee Tribe of Mvskoke Creek, is the program director of the American Indian Recruitment & Retention (AIRR) project and helped petition for a space on campus to be devoted to Native crops and serve as a community area for Native students. For about three years, Kemmerle said, Native students and the Native American Academic Student Success Center, also referred to as the “Native Nest,” advocated for this, but were met with little support from the university.

“It did make me discouraged about the university wanting to meet the needs of Native students,” Kemmerle said. “Being a Native student myself it just felt like it was my duty as a community leader and a student leader on campus to get the conversation going to start advocating for a space on campus, whether it be at the arboretum, at the student farm or somewhere else. It was up to the students to really make that happen with the support of other Native faculty and […] the Native Nest.”

Annika Shije, a second-year biological systems engineering major and a member of the Santo Domingo and Santa Clara Pueblo Tribes, used to work at the Native American Academic Student Success Center. Shije remembers first finding a rare sense of community at the Native Nest among other Native American students.

“Inside the Nest, we were all really close,” Shije said. “We had a lot of the same experiences and that was really refreshing and nice, and I actually spent a lot of my time there, a lot more than I thought I would. I think it’s very good that I had that kind of connection because in classes and other areas, I did not have that at all.”

According to Kemmerle, after years of advocating for garden space, the university has recently granted a Memorandum of Understanding (MOU) to the Native American Student Union (NASU), stating that it will pay in perpetuity for five plots of land that the Native American community will use to plant traditional crops.

“In the MOU, the ASUCD say, ‘Oh, we acknowledge we’re on the land of the Wintun people,’ but instead of just doing land acknowledgments, they’re going beyond that,” Kemmerle said. “They’re saying, ‘Okay, what do Native students need,’ or, ‘How can we better serve the Native community?’ And this is definitely […] a positive thing that has come out of years of students wishing they had a space on campus.”

One of McConnell’s current endeavors is to disaggregate, or create an accurate breakdown, of data reflecting the population of Native American students at UC Davis.

“One of the things I’m working on on the Native and Indigenous Committee right now [is] I’m sharing a subcommittee for disaggregating Native student data, […] which is crazy because it seems like that should already be something that’s worked out,” McConnell said.

When considering the broader UC system, the percentage of Native undergraduate students in the fall of 2011 was 0.67%, which is not reflective of the percentage of California’s population that identifies as Native American (1.94% as of this year). According to McConnell, the UC should be cognizant of this discrepancy.