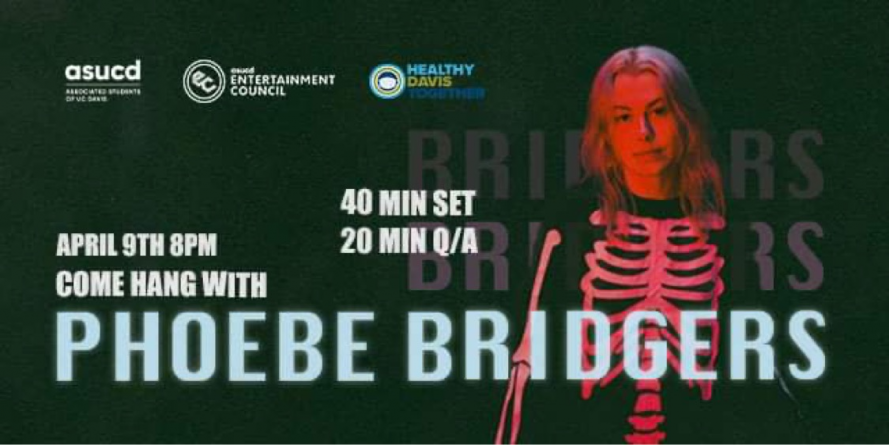 The indie-rock musician gave an intimate concert, opening up about her image and her music

According to Galit Hara-Salzberg, the head of ASUCD EC, whether Spring Quarter would have an event at all was shrouded in uncertainty in the fall due to considerations of safety restrictions as well as budget cuts. Luckily, ASUCD EC partnered with and got funding from Healthy Davis Together for this event and the “Lean into Local Life” series from Winter Quarter—allowing Hara-Salzberg to search for an artist students would be excited about.

With about 500 people in attendance on the Zoom and over 150 questions submitted to the Q-and-A, there really is no denying that the “Pharbz”—the self-proclaimed name of Bridgers fans—were happy to have her in Davis, no matter if it was through a screen. It felt as if after every single song there were at least ten people in the Zoom chat claiming that they were “literally crying,” which is definitely not an unbelievable feat considering Bridgers incredibly emotionally charged discography.

The event was aptly promoted all over Facebook and every other person’s Instagram story as a chance to “Come Hang with Phoebe Bridgers,” as her usual laid-back demeanor was clear to see throughout the show. Between her guitar-tuning breaks between songs, the jokes and bits of trivia about each song and her engagement in the Q-and-A, it really just felt like a chill Zoom call with a friend (who has the voice of an angel) and an incredibly active chat. With the open chat and added direct Q-and-A between Bridgers and students, this Zoom call was practically as close as anyone could (safely) get to an in-person event right now.

As Bridgers sang her especially hard-hitting (and chart-topping) songs such as Motion Sickness, Moon Song and Kyoto, the participants in the chat (as well as myself) were in shambles. As Bridgers so eloquently puts it in her song Motion Sickness, “there are no words in the English language,” for this fairly intimate, yet remote, live performance. It is safe to say that the ASUCD EC entirely succeeded in their mission to find “someone who could connect, and be a friend,” as Hara-Salzberg said.

After 40 splendid minutes of music, Bridgers answered a few live questions from students and made time to introduce her beautiful pug puppy, Maxine, to the audience. At one point Bridgers discussed the frustration sexism in the music industry induces, pointing out the painfully overused “Sad Girl Musician” monolith that has so often been used to group any woman making emotional music together, disregarding the myriad of genres and topics broached by the artists placed under this umbrella. According to Hara-Salzberg, it was of great importance to find an artist from a genre ASUCD EC had not previously hosted, and landing the woman currently dominating not only the indie scene but the music industry at large perfectly fit that bill.

While Bridgers is the creator of some of the best cry-inducing music, she is one of the most personable, giggly and witty people in a Zoom meeting, and one can only imagine how electric her truly live performances could be (even if they are usually sans-Maxine, the perfect pug). With the immensely positive reaction this event received from the student body at Davis, it begs the question of if we might get another interactive show, whether virtual or in some other form, further down the line. It looks as though this may be the case: “It will definitely be something to consider next year […] we don’t know how things will look but the next [ASUCD EC] Director should definitely factor [events modeled like] this into their plans,” Hara-Salzberg said.
Written by: Angie Cummings — arts@theaggie.org