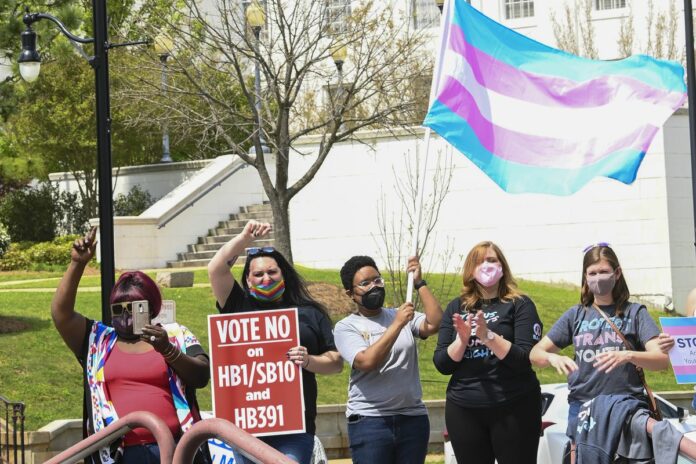 Next on the agenda: the livelihoods of transgender youth and the state of gender-affirming care—ploys in a culture war that when made into law, reap political benefits at the expense of those most vulnerable. Despite names like Arkansas’ Save Adolescents from Experimentation (SAFE) Act and Alabama’s Vulnerable Child Compassion and Protection Act, these laws are malicious and created with zero empathy for transgender youth.

The Arkansas SAFE act prohibits physicians from providing gender-affirming treatment for transgender youth under 18. After the bill was passed in the House, pediatric doctor Michele Hutchinson testified to the Arkansas senate that there were “multiple kids in [the] emergency room because of an attempted suicide.” Hutchinson’s testimony captured the plight of transgender youth who will be denied necessary care; however, it did little to change the convictions of Arkansas’ House and Senate.

With Arkansas’ House and Senate voting 71-24 and 25-8 to override Gov. Asa Hutchinson’s veto of the SAFE act, Arkansas is now the first state to criminalize gender-affirming treatments for transgender youth. This is not an isolated case. In the past year, 174 anti-LGBT bills have been introduced, 95% of which are specifically aimed at transgender people.

In Alabama, the Vulnerable Child Compassion and Protection Act criminalizes medical professionals who provide puberty-blocking medication, testosterone and estrogen doses and surgery for transgender youth. Should the bill become law, violations by medical professionals will be considered a Class C felony and punishable by up to 10 years in prison.

The law manages to be even more egregious in its invasion into the lives of transgender youth by requiring school administrators such as nurses or counselors to disclose to their parents that “his or her gender or sex is inconsistent.” It effectively outs transgender youth and further ostracizes them by eliminating their support systems.

As of now, the Vulnerable Child Compassion and Protection act has passed 23-4 in the Alabama Senate. As the future of gender-affirming care hangs in the balance, Dr. Morissa Ladinsky reports that “almost every clinic visit [has] ended with either a parent or child choking back tears, saying, ‘Where do you think those bills are going? Is it gonna happen?’”

The act is sponsored by Sen. Shay Shelnutt of Trussville, who has admitted he has never spoken to transgender youth, yet feels justified in stating that “there’s no medical condition that these kids have. It’s just in their mind.”

Shelnutt’s bill opens up a realm of horrifying precedents. It is an over-expansion of government authority into the lives of transgender youth, prohibiting treatments even with parental consent. It validates that a law can be created by a politician who has never spoken to the constituents it gravely affects.

It exacerbates obstacles transgender youth face. Thirty-five percent of trans youth have attempted suicide compared to 7% of their cisgender peers, according to a 2017 study. When unable to access adequate care, some youth resort to buying off-the-counter hormonal treatments and administering these treatments without “proper medical management.”

Shelnutt’s bill fails to acknowledge the dismal realities transgender individuals face in searching for gender-affirming care. There are numerous roadblocks in finding gender-affirming care; it is inadequately taught in medical schools, and discrimination by healthcare providers—verbal and physical abuse, refusal of care and incorrect care—is routine. Sixty percent of transgender patients who are unable to find physicians to help them due to anti-transgender bias have attempted suicide.

The bill fails to acknowledge the “nuanced and deliberative” practice a person experiences when transitioning. Contrary to Sen. Shelnutt’s point that “children aren’t mature enough to make this decision on surgeries and drugs,” transitioning is not a process that happens on a whim. According to psychologist Laura Embry, who works at an adolescent gender clinic in Alabama, families may wait months or even years before interventions are deemed appropriate; the process of informed consent is “extensive” and highly individualized to a person’s development.

The act also describes puberty blockers and hormones as “uncontrolled human medical experimentation,” implying that transgender youth aligning themselves to their true and congruent gender identities is somehow a self-inflicted form of “experimentation” that is happening with little medical guidelines put in place. The language in the bill stigmatizes transitioning by implying that it is inherently unnatural by placing it in conjunction with an “experiment.”

The bill fails to look beyond its single-minded narrative into the benefits of puberty blockers for transgender youth and the positive implications on mental health. The bill refers to the administration of puberty-blocking medications as “irreversible.” Puberty blockers are not “irreversible”; if a youth were to stop using puberty blockers, “puberty will continue as if the medication were never utilized.” Furthermore, puberty blockers can give transgender youth more time to explore their gender identities before making permanent changes all while “reduc[ing] the distress associated with secondary sexual characteristic development that is incongruent with the patient’s lived gender.”

The bill’s claim that “a substantial majority of pre-pubescent children who claim a gender identity different from their biological sex will ultimately identify with their biological sex by young adulthood or sooner when supported through their natural puberty” falls back on a narrative that many youths will “desist,” an assumption based on studies that have been called into critique by the Gender Dysphoria Affirmative Working Group.

Research on desistance cite that 65 to 94% of transgender youth “grow out of their transgender identity.” However, there are many issues with this existing research: criteria for gender dysphoria diagnosis was “less stringent” in the past, and many diagnosed with it in the past may not have the same diagnosis today, potentially overblowing desistance statistics. Also, a study cited anyone not returning to their clinic as “desisting” without greater inquiry, when in reality, some participants did not respond or could not be contacted.

It is wholly irresponsible to use studies with problems in its methodologies to make a blanket assumption of transgender youth. It also perpetuates misconceptions about detransitioning by “painting transgender people as just temporarily confused or suffering from a misdiagnosed psychological disorder.” A 2015 study surveying 28,000 people found that 8% of respondents detransitioned, with parental pressure cited as a common reason. For puberty blockers, less than 2% of youth decided to stop treatment.

The Vulnerable Child Compassion and Protection Act does not care about protecting children—this is apparent in the discriminatory language in the bill, its lack of empathy and its dispensation of inaccurate information.

Which to reiterate—he has not, yet he is spearheading a bill that would deny transgender youth their rights to gender-affirming care and force them to be outed when they are not ready. Sen. Shelnutt and other politicians who support this bill should not impose their lack of knowledge or moral systems into the lives of transgender youth.