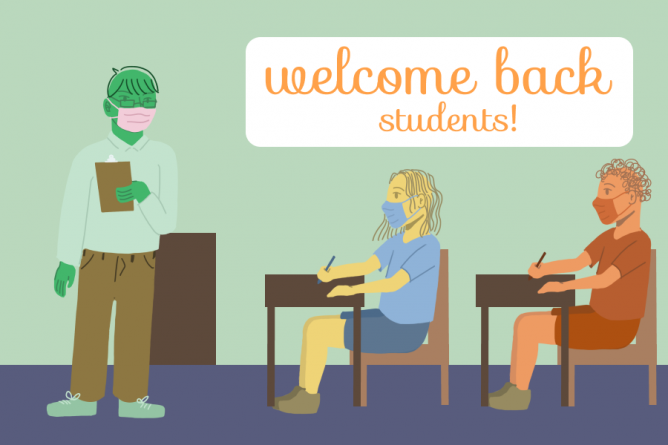 Educators share concerns over safety and fairness in the reopening process

As COVID-19 vaccination rates increase and infection rates decrease in California, many public school districts are preparing to reopen for the first time since March 2020. The Davis Joint Unified School District (DJUSD), which includes over 20 elementary, middle and high schools, has set their reopening date for April 12, when all students will be invited to return to school five days a week.

Originally, the district had come up with a hybrid plan wherein two pods would be created in every grade, an A and a B pod. The A pod would attend school in person on Mondays and Tuesdays, the B pod would attend on Thursdays and Fridays, and all students would learn from home on Wednesdays.

Then, over the district’s spring break, on April 2, the district released new plans to open to all students who wished to return to campus five days a week. A special board meeting was held to decide between two entirely new schedules: one in which all students returning in person would be on campus four days a week and everyone would learn virtually on Wednesdays, and another where all in-person students would be on campus five days a week. Ultimately, the board decided in a 3-2 vote decision to move forward with the five day plan, beginning on April 12.

According to Jessica Beckinger, a kindergarten and first grade teacher at Birch Lane Elementary, it has been very difficult for teachers to adjust to this decision.

“It’s been stressful because they sent out one schedule for Phase 3, and then we went down a tier and so then all of a sudden, without notifying teachers or parents, we jumped into a totally different schedule,” Beckinger said. “So we had planned over spring break for having kids two afternoons a week, and now we will be having them five mornings a week. All the plans we did got scrapped, and we are kind of scrambling […] to come up with a whole new way of teaching within a week.”

At the elementary and secondary levels, 20% of students have elected to remain in distance learning for the remainder of the school year, which means that teachers will have to create separate lesson plans for these students to meet district requirements. For kindergarten students, that means 45 minutes of “live” instruction per day.

“We’re trying to think about how we meet that live [Zoom] time while still keeping a similar schedule to what we’ve had for our distance learners. Their parents have built their whole work lives around that and are not going to be thrilled with us if we suddenly radically change it on them,” Beckinger said. “Some of our students are home with their parents in the morning and then are going to a preschool or a daycare in the afternoon, so [we’re] trying to think of what will work for families.”

To accommodate these students, Beckinger and her colleagues have decided to “simulcast”—or record—their morning meeting with the in-person students so that the distance learners can watch it whenever their guardians have established their school time. They plan to make sure the meeting is at least 45 minutes long so that it can count for their live instruction minutes. In addition to this simulcast, Beckinger will have to create separate asynchronous lessons for her at-home learners to watch so that they get the same amount of instruction as they would in person.

Generally, Beckinger teaches in a Montessori style, which usually involves children working with one another, sharing materials, and moving around the classroom independently, but due to COVID-19 restrictions, she had to restructure her in-person teaching style completely. Students will no longer be allowed to choose their own seats or collaborate with a friend. She will be teaching lessons from the front of the classroom while all students sit at least three feet apart. When students do use books or Montessori materials, they will have to be disinfected and quarantined for some time before another student can use them.

She explained that this is going to be difficult for students whom she taught last year to adjust.

“They’re thinking they’re going to come back and it’s going to be like it was last year, and it’s not,” Beckinger said. “There’s going to be no recess, no working with a friend, that social aspect […] is not going to be there anymore.”

Middle school teachers are dealing with a similar situation. Josephine Eberle, a seventh grade teacher at Emerson Middle School, said that she and her colleagues have also been trying to ensure that both students in person and at home are being taught, which has required a lot of reworking.

“We’ll be teaching the students in front of us and the students who are in that distance situation,” Eberle said. “We are going to have to learn how to do that. That’s going to be the transition.”

An even larger proportion of high school students—about 50%—have elected to remain in distance learning for the rest of the year. High school classes won’t look that much different in person as they have online, according to Dianna Stommel, an 11th grade history teacher at Davis Senior High School.

“I can’t really do anything much different than what I’ve been doing,” Stommel said. “You still have to be aware of the half of your students that are still logging in with Zoom and doing their work that way. The benefits for the students that are coming to school […] is really the socialization and returning to campus and having some sense of normalcy.”

Stommel will continue to teach from home this year because of a medical exemption, but she said that even if she were in person, her lesson plans would look largely the same. Her in-person students will be proctored by another teacher while they watch her on the projector at the front of the classroom, and her distance learners will continue to watch her via Zoom on their personal devices.

For all teachers, the preparation for in-person classes on April 12 has been very hectic, according to Stommel. Beckinger explained that it has also been less than ideal for most.

“We had a choice between a four-day week schedule and a five-day week schedule,” Beckinger said. “Teachers were polled and 85% of teachers wanted the four day [in-person schedule], so that we did have one day a week to plan and prepare lessons for the distance learners. That was not passed, so that was a big disappointment. I’m a parent of two young kids. I cannot be here until eight at night.”

Many teachers have concerns over both the safety and fairness of the way that the DJUSD is handling the return to in-person classes.

“Even if you’re a super experienced teacher and have lots of years and activities under your belt, you kind of had to relearn everything this year,” Stommel said. “Most of the things that I would do in my classroom that work, and how I would teach, you can’t really do. You have to kind of redesign and redo your entire curriculum. I know people have been working tons of overtime this year.”

“It’s asking teachers to do two jobs within the time and for the pay of one job,” Beckinger said. “I don’t think it’s fair. It’s just asking a whole lot of teachers and learning a whole new way of delivering education when we have already done that twice in the last year.”

In addition to the increased workload that this year has required of teachers, some believe that the district’s handling of the return to campus has been unfair for teachers personally.

“We don’t get the choice to keep our children in distance learning once we’re being sent back, so that piece is also a bit unfair,” Beckinger said. “If we have school-aged kids and we don’t want them in a room full of other children, that choice is being taken away now from a lot of families.”

Some teachers have also struggled to get permission to continue teaching from home, despite their safety concerns, according to Beckinger.

“It’s turning out to be quite difficult for teachers who do have a medical note for themselves or someone in their family to actually remain in distance learning,” Beckinger said. “I have a close friend here at work who is a single mother, and her daughter has a pre-existing condition, […] so they have been completely and very strictly quarantined this whole time, teaching 100% out of her home, and now she has to come back to work. What about her daughter who isn’t vaccinated? On our salaries, it’s hard to hire a personal nanny to come in.”

Some teachers are also worried about the safety of their students as a vaccine has not yet been approved for their age group.

Beckinger said that she is also worried about the well-being of students’ parents.

“I am personally protected, but that does not mean that my classroom opening up will not be the source of a community spread,” Beckinger said. “What if my room is responsible for someone’s death?”

Eberle said that apart from these concerns, teachers are looking forward to having students back in person.

“It is a completely different energy,” Eberle said. “I keep telling my students that they really have to wear name tags, because I have no idea what they look like because my secondary students have kept their cameras off for the last quarter. So everybody’s going to have to introduce themselves all over again.”

Although many teachers are excited to welcome their students, Beckinger is worried that teachers might not be as sure about their career plan as they have been in the past.

“This is my 16th year teaching. I’ve always been 100% sure that this is what I was going to do my entire career,” Beckinger said. “And this past year has been so demoralizing. […] Teachers are getting publicly vilified as though it’s our decision whether or not to open up schools, [even though] every teacher I know is trying so hard to make the kids happy and learn.”
Written by: Katie DeBenedetti — features@theaggie.org