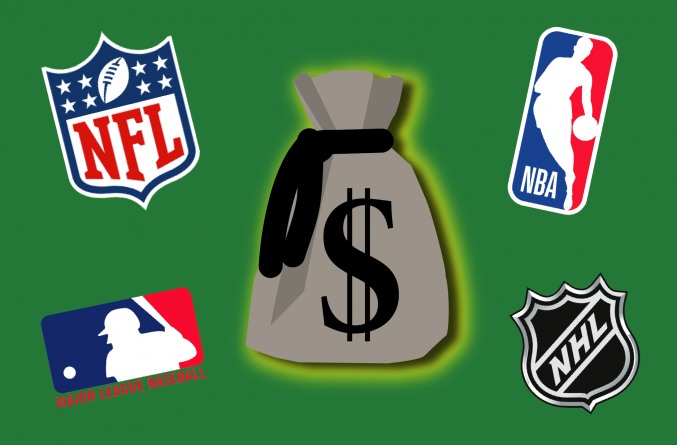 Major pandemic losses may take time for the leagues to recover, but there is some hope

As fans begin to make their way back to the seats at sporting events, some places are farther along than others. For a variety of reasons, having fans back in any capacity is something that team executives have loved seeing.

After all sports paused on March 11, 2020 due to COVID-19, experts projected losses of up to $12 billion across all sports. While the resumption of leagues cut that cost down by some margin, there is still a significant hole left in the pockets of leagues owners. How different leagues recover over time remains to be seen, but it is clear that there will be a long road ahead to get back on the upward trajectory they had pre-pandemic.

The National Basketball Association (NBA) was able to conclude their season in the bubble in Orlando, FL, a campus that cost the league $180 million to operate. But that was a price tag the NBA was more than willing to pay, as their successful venture at the Walt Disney World Resort prevented a loss of $1.5 billion.

Ticket revenue is usually a major part of the NBA’s annual revenue, but the pandemic had forced them to rely primarily on television and sponsorships instead. In the end, their total revenue during the 2019-20 season was $8.3 billion—10% less than the last full season.

As they entered the new 2020-21 season, a lot was left to be determined. With a start date undetermined and the absence of fans in most arenas, the NBA had decisions to make when it came to the salary cap and how they would set up their finances. A January start to the season would have cost the league up to $1 billion in revenue, so they decided to do a quick turnaround and start Dec. 22, 2020. With their salary cap staying the same as it was in 2019-20 ($109.1 million), teams would not be hit as hard, nor would they have to make drastic changes in finances. In the agreement between the players association and the league, at least 10% of the salaries would be held in escrow to allow the planned increase of 3 to 10% in the salary cap each year.

The revenue losses this current season remain to be seen, but after a year where the majority of games did not accommodate fans, it is possible that the losses will further increase from last year. Although fans might begin to make their way back slowly as the playoffs approach, it is clear that the pandemic put a major dent in the NBA’s future plans that signaled a lot of financial prosperity.

As with the NBA, the National Hockey League (NHL)’s season was derailed by the pandemic. When everything paused in March, the league lost an estimated $150 to $200 million  in playoff ticket sales alone and much more in additional television and sponsor revenue. While they also finished off their season in an NBA-type bubble in Canada, the lead-up to this season has been quite underwhelming. The league only played 56 games, but NHL Commissioner Gary Bettman stated that it would’ve saved more money to not play at all.

Like the NBA, the NHL’s salary cap stayed the same at $81.5 million. However, even after their new lucrative TV deal with ESPN, the possibility remains that the salary cap will remain flat for up to five years. This can spell some danger for teams who were banking on the rise of the salary cap and may lead to some major cuts in players’ future earnings—especially those who were looking for a big payday down the road. Out of all leagues, the NHL, which relies heavily  on ticket revenue and has sustained multiple billions in potential losses, is especially eager for fans to re-enter the arenas.

Out of all leagues to play in 2020, the one that saw the most drastic change to their sport was Major League Baseball (MLB), who saw their usual 162-game season shortened to just 60. In a grueling negotiation, MLB and the players association reached an agreement for their shortened season, and after many postponed games, the league finally welcomed back fans for the first time in the National League Division, Championship and World Series.

According to a study by Penn National Gaming, MLB lost about $2.5 million in ticket revenue as a result of the shortened season with no fans. Given that baseball doesn’t have a salary cap, the amount of financial changes when it comes to salaries depends on the owners’ willingness—or rather, unwillingness—to spend. As there is no official number on how much was lost, the answer changes depending on who you ask.

According to MLB Commissioner Rob Manfred’s statement back in October, the league lost at least $2.8 billion in 2020. But powerful baseball agent Scott Boras claimed that not a single team lost any money. While the number varies per team, there has been even more of a reluctance to spend due to COVID-19. Whether it is due to big losses or simply MLB owners not willing to spend a lot of money, this baseball season is one that the league and teams hope somewhat recovers as all stadiums are welcoming back some percentage of fans.

The National Football League’s (NFL) handling of COVID-19 was very different from the other leagues’. During March’s shutdown, the NFL was not in season, nor did they have any official league business in person that required drastic changes. Aside from draft preparation, the NFL had a lot of time to prepare for the upcoming season. Still, they didn’t reach an agreement with the NFL Players Association until late July. Nonetheless, the league began their regular season with no preseason, and fans in attendance varied on the location as teams like the Dallas Cowboys, Tampa Bay Buccaneers and many others welcomed some fans back. As the season progressed, many more teams were able to get some fans in but not enough to significantly curve the financial damages. After a season of headaches rescheduling games in order to avoid cancellations, the league was able to culminate the season with their annual Super Bowl in front of 25,000 socially distanced fans. In the end, the NFL benefited from being the last league to start their season in the pandemic, which allowed them to learn from other leagues and find ways to welcome some fans into some arenas nationwide.

According to the New York Giants co-owner, the league lost out on $3 to $4 billion in revenue. While this is a big figure, they believe that it is not anything “catastrophic,” as the NFL is the most profitable league in the world. Although the salary cap this year was set at $182.5 million—$15 million less than last year—the new television deal worth $10 billion a year starting in 2023 will surely help give the salary cap a major boost in the coming years. In agreement with CBS, FOX, NBC, ESPN/ABC and Amazon, the league was able to recuperate a lot of money, and in the future, the NFL will be able to fully recover from the pandemic losses.

It is hard to say if these sports leagues could have survived the substantial financial losses without major television deals. Sports has become lucrative over the years, and the television industry has surely helped with that. As fans begin to fill the seats, the road to recovery begins for the majority of sports leagues—but it will be one that will take time given the unprecedented nature of what has occurred in the last 13 months.
Written by: Omar Navarro — sports@theaggie.org