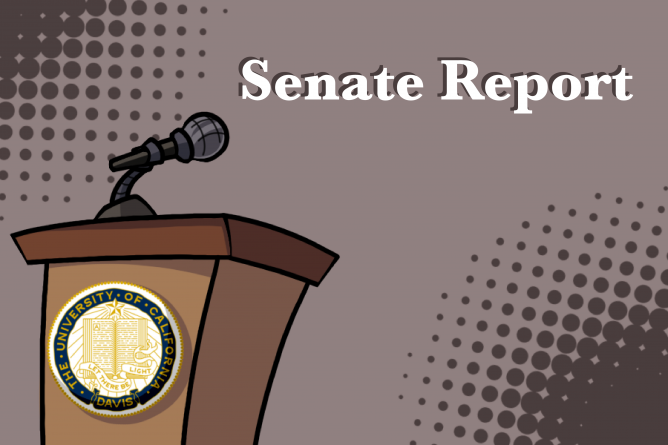 The April 1 senate meeting was called to order at 6:10 p.m. by ASUCD Vice President Emily Barneond.

Senate Bill #69, a motion to introduce a student ballot measure for the continuation of a $3 fee to support The Green Initiative Fund, passed with one objection from Senator Roberto Rodriguez Ibarra, who said that the fee would disproportionately affect minority students.

“It’s unfair to have a fee referendum during a global pandemic which has affected every student, but particularly those students from marginalized communities,” Rodiguez Ibarra said.

A full 20% of the student body would need to approve the continuation of the $3 student fee and the subsequent $2 increase every academic year until 2031. This translates to approximately 5,900 students required for it to pass, according to Environmental Policy and Planning Commissioner Hunter Ottman.

“Simply looking at how the voter output was last quarter, I just don’t really see how it’s going to get to 20%,” Senator Kristin Mifsud said. “Is there a huge effort to advertise this and make sure that it gets to 20%? Because I definitely know that this needs to pass, but I don’t know if it’s feasible on its own.”

The fee would not increase the overall student fees currently being assessed, but would continue a fee that has been paid by students for the last five years and phases out at the end of this Spring Quarter, Ottman said. The motion passed with 9-1 against, with senators offering to assist in the get-out-the-vote campaign.

Controller Alexis Lopez-Perez noted that after the bill is passed, ASUCD will have $502 left in senate reserves.

The bill was passed unanimously. The motion has been working its way through the senate process since spring 2020.

“I just want to say thank you to the Senate table,” Navarro said. “This has been in the works for literally over a year so I’m so glad we got this done.”

Senate Bill #68, a bill intending to restrict commissioners’ ability to endorse Senate candidates, was presented as emergency legislation before being withdrawn by its author Mifsud. Multiple commissioners criticized the proposed legislation, saying that it removed the limited power that commissioners have.

After three more commissioners spoke up against the introduction of the bill, Mifsud apologized for presenting the item as emergency legislation, which she said she did because elections were coming up quickly.

“Hearing your perspectives on this, I see I was definitely wrong and for that, I do apologize,” Mifsud said. “I meant no disrespect.”

Senate Bill #67 was assigned to the Academic Affairs Commission; the bill would establish the Research and Data Center Unit.

Mifsud mentioned the large-scale data breach that affected the University of California and encouraged students to be protective of their data.

“Be aware that some of our data might have been compromised in the cyberattack,” Mifsud said. “There is not a lot of information other than that right now.”
Written by: Kathleen Quinn — campus@theaggie.org