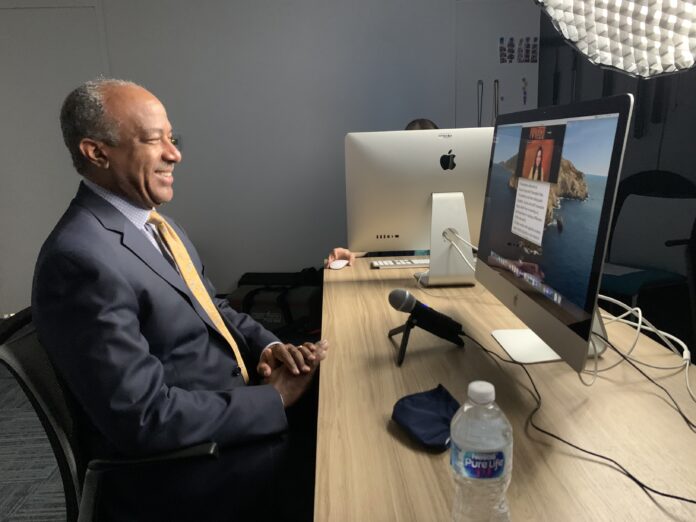 The talk show, called “Face to Face,” aims to highlight the achievements of students, faculty and staff

Chancellor Gary May is holding a new monthly talk show, “Face to Face,” during which he shares the spotlight with impressive guests. May said he hopes the show will allow him to build a deeper connection with the community despite the pandemic’s obstruction of normal modes of human interaction.

“We have an ongoing commitment to try to be closer to the campus community and be accessible, available and approachable,” May said. “During the pandemic, it’s harder to do those things because you can’t do them face-to-face, so now we have ‘Face to Face.’”

If May wasn’t a chancellor and electrical engineer, he said he would perhaps take on hosting a talk show as a full-time gig.

“A couple of years ago, Chancellor May answered a question someone asked him about other career paths he was curious about,” said Dana Topousis, UC Davis’ chief marketing and communications officer, via email. “He said being a talk show host was interesting to him. Because I know how much he enjoys interacting with students, faculty and staff, I suggested that we introduce a campus talk show with him as host. He agreed!”

Topousis said that May is a natural talent.

“He isn’t receiving coaching on how to behave as a host,” Topousis said via email. “He has interviewed a lot of people during his time as chancellor, particularly during his Chancellor’s Colloquium series, so he’s had a lot of experience.”

“Face to Face” seeks to spotlight campus leaders, enable connection during the pandemic and highlight impactful work, according to May. By allowing viewers the chance to get to know the chancellor better, the show also aims to lessen the gap between administrators and the rest of the campus community.

“[‘Face to Face’] gives me a chance to learn about all of the neat things that are happening around campus and the people that are contributing,” May said. “It gives the audience a chance to hear and learn about those things too, but also it humanizes me and makes me more approachable. I think I am pretty human, but I like to be humanized so that the connection can build.”

The first episode of the show was released on March 30 and featured student leader and activist Akshita Gandra, a fourth-year cognitive science major. Gandra is the founder and president of The REVIVAL Zine, an intersectional feminist publication, and the co-founder of the UC Davis chapter of Period.

“I started REVIVAL to provide underrepresented students, especially women, with the chance to share their opinions, use their voices and tell their stories,” Gandra said via email. “I co-founded and led Davis Period, which strives to provide free menstrual products to students and communities in need, all while providing educational resources about periods and reducing stigma.”

Gandra said she was honored to be the first guest to chat with May.

“I enjoyed being given the opportunity to speak more about the projects I’m very passionate about, as well as learn more about the Chancellor,” Gandra said via email. “It was a very self-reflective process and it was great being able to share my favorite things about UC Davis. I’m very happy with the outcome of the interview because I was able to talk about causes that are super important to me.”

When UC Davis resumes in-person classes in the fall, guests will join May in his studio in Mrak Hall.

“We’ve got a studio under construction in Mrak in the basement,” May said. “We’ll have two chairs and me just talking to the person.”

Currently guests are hand-picked by strategic communications, but Topousis said that they are working on developing a nomination method. Future guests can look forward to May’s comedic approach and relaxed demeanor.

“Chancellor May has a great sense of humor, which helps guests feel at ease,” Topousis said via email.

Gandra agreed that the chancellor has a calming presence.

“At first I was a little nervous about speaking with the Chancellor, but he was very easy to talk to,” Gandra said via email. “Sometimes, it can be intimidating to speak with administration, but based on my experience there are plenty of UC Davis representatives who are incredibly receptive to students’ opinions, ideas, and stories.”

Viewers can watch the next episode of “Face to Face” on April 27, which will feature a faculty member who writes children’s books. But viewers can also anticipate learning more about the show’s host.

May described his relative fame as a blessing and a curse. While he loves interacting with students, being in the public eye comes with its pitfalls.

“It’s kind of like being on the D-list,” May said. “I do get recognized at Davis—that’s kind of fun. It’s a double edged sword because you have to kind of watch what you are doing all of the time, because someone is always paying attention. But for the most part people are really nice. They’ll come up and say hi. They may ask about something going on or give you a compliment or want a picture, which is always fine. My wife and I both enjoy that.”
Written by: Rebecca Gardner — campus@theaggie.org