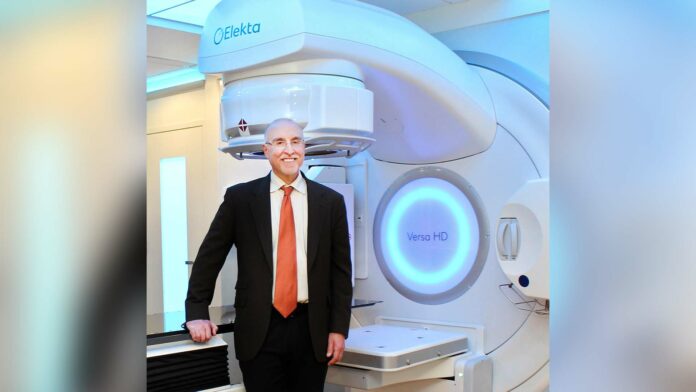 As a National Cancer Institute (NCI) designated Comprehensive Cancer Center, the UC Davis Comprehensive Cancer Center has a responsibility to offer personalized and innovative treatment to their patients, as explained on their website. In order to continue providing patients with quality care, the center recently installed an Elekta Versa HD linear accelerator to target complex tumors, according to a recent article by UC Davis Health. According to Stanley Benedict, a professor in the UC Davis Health Department of Radiation Oncology, the currently installed machine is named Versa Blue and the incoming one—to be installed September 2021—will be named Versa Gold to pay homage to the UC colors.

“These linear accelerators have multiple digital imaging capabilities that provide planar images, 3D images (like a [computerized tomography] CT scanner in diagnostic radiology) and even 4D images which can indicate the range of motion for a patient’s anatomy relative to their treatment site,” Benedict said via email.

Shyam Rao, an associate professor in the department of radiation oncology, elaborated that there are three central pillars of treating cancer—surgery, chemotherapy and radiation oncology, or using ionizing radiation to destroy tumor cells. Despite radiation being a powerful treatment for killing cancer cells, it also has the potential to damage normal tissues. Rao explained that with the new Versa HD linear accelerator, the improved image guidance through 3D and 4D scans allows him to better focus the radiation.

“This machine can do something that the [older models] couldn’t do which is a 4D scan, which [means] it can take images in real time,” Rao said. “Let’s say someone had a lung tumor. If you just did a CT scan, you would just get a snapshot of where it is, but with these 4D scans you can get scans of how it’s moving in time. As you breathe in and out, the tumor goes up and down or left and right.”

The Versa HD is not the only recent upgrade the UC Davis Comprehensive Cancer Center has made. Rao stated that the center has been adding other advancements such as imaging techniques that can detect the patient’s movement on the operating table with non-ionizing radiation. They also have been recently using a Flexitron, a machine used for the technique of brachytherapy where radiation sources are placed inside the tumor to radiate from the inside out. In addition, the center has a Gamma Knife unit which allows physicians to use extremely focused radiation on small structures such as the brain.

“Versa HD is very exciting, but we’ve actually been upgrading and updating everything in the department so we’re very excited about that,” Rao said. “For everything, we’re bumping up our technology which makes us excited that we can do more targeted treatment. In the end, that’s the goal—to get the treatments more and more focused and targeted on the tumor and try to miss all the normal tissues and minimize damage.”

Rao elaborated that each piece of technology is used for a different kind of tumor. For example, as demonstrated in a case study by the University of Heidelberg, the Versa HD linear accelerator can be used to treat surgically inoperable tumors in the lung, while gynecological tumors are better treated with a brachytherapy machine.

“It’s not just one machine, we need to have all the technologies because we see so many different things, complicated things that sometimes are not familiar to people in the community so we have to be prepared for anything or to help anyone who comes in,” Rao said.

Ultimately, the UC Davis Comprehensive Cancer Center hopes to use these new upgrades to achieve the same, if not better, effectiveness of treatment while reducing side effects and normal tissue injury from radiation.

“Our goal is to cure people first and foremost if possible,” Rao said. “But we know there’s side effects and we’re trying to be on the cutting edge of minimizing those side effects. That’s the overarching unifier between all these technologies we’re putting in.”