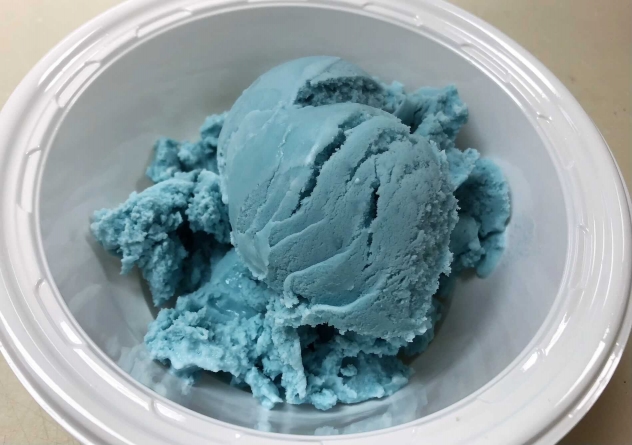 Photo Credits: The natural blue pigment found in red cabbage was not available for consumer use in large quantities, so UC Davis researchers worked on figuring out ways the color could be produced with higher efficacy. (Rebecca Robbins / Courtesy)

Pigments, or anthocyanins, of blue color are extracted from red cabbage to be converted into products for commercial use

An international team of researchers, including chemists from UC Davis, recently discovered and refined the natural production of cyan blue food coloring, a challenge that has plagued scientists for almost two decades.

The scientific lead on the research project, Pamela Denish, a current UC Davis Ph.D. candidate in her sixth year as part of the Biophysics Graduate Program, explained why discovering this natural blue dye on par with the current FD&C Blue No. 1 was such a remarkable feat.

“There has been this movement in the customer demand for natural ingredients and their food products, and people are trying to get away from synthetic ingredients,” Denish said. “So we’ve seen a lot of the major food producers making public commitments to getting rid of synthetic ingredients and one of those groups of ingredients is food coloring. Companies have started to phase out synthetic dyes in favor of naturally sourced colors and they actually found that blue is really hard to find; it does not exist in nature as much as you would think.”

Mars Advanced Research Institute and Mars Wrigley Science and Technology, addressed as Mars for short, has been the primary research institute developing a natural and brilliant blue dye. They found that the pigment in red cabbage produced a perfect brilliant blue, but only existed in very minimal amounts.

With the help of chemists from UC Davis, an enzyme has been developed and refined to convert these pigments, called anthocyanins, into much higher amounts and at a much higher efficiency in hopes of meeting customer demand. Mary Riley, a graduate student in the UC Davis Department of Microbiology, tested and refined the enzyme to better mass produce the anthocyanins.

“[Mars] realized that this anthocyanin was only like 5% of the entire red cabbage mixture,” Riley said. “There are these other anthocyanins that are just slightly bigger than this one that we want, and we designed an enzyme to break those bigger ones into the small one that we want. So then it goes from 5% of that anthocyanin we need to like 50% of the mixture.”

Rebecca Robbins, a trained organic research chemist at Mars, explained the chemistry behind why blue is such a rare color in nature compared to other colors like reds and violets.

“In order for the anthocyanin to absorb in the red area, for example, nature has to create actually very elaborate structures,” Robbins said. “It’s just the nature of the wavelength and the energy. You see all the violets in petunias; that’s an anthocyanin but it’s just a simple anthocyanin. In order to really shift it to the area of blue, nature starts to add aromaticity. It has to react with metals; it has to not only increase one molecule, but sometimes it has the stack in order to get blue and the right wavelength. That costs a lot, if you will, in terms of natural resources and natural energy, so they are very rare in nature.”

From what appeared impossible, UC Davis chemists successfully designed an enzyme to help convert these rare anthocyanin blue dyes, found as a small percentage of red cabbage extract, into a highly efficient anthocyanin that can now be used for mass production.

From the lab to the world of industry, Denish and Dr. Justin Siegel, for whom she works in the lab, had already begun a startup company called PeakB, which Denish explained as a unique opportunity to bring the blue color to the market.

“I think it’s a cool opportunity to kind of standardize the production of natural food colorants,” Denish said. “There are a couple of big companies that have started to transition into that. They’re called color houses, and basically there are companies dedicated to food coloring. But they have their portfolios of all these synthetic dyes and have slowly started to look for sources of natural color, so we’re trying to just kind of establish that pipeline for blues.”
Written by: Brandon Nguyen– science@theaggie.org