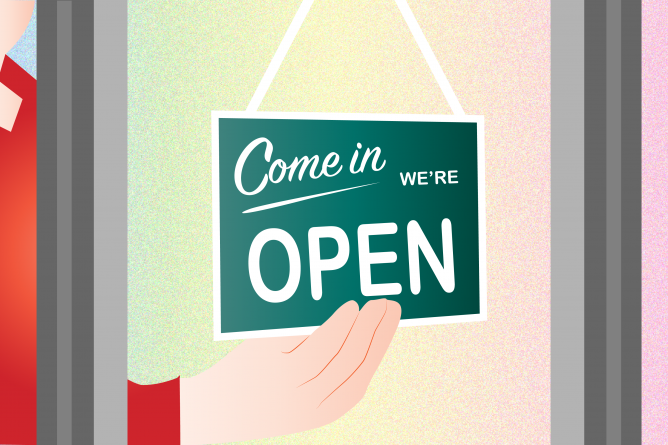 As small businesses struggle and large companies like Amazon continue to break records, individuals can decide which stores to support

As the COVID-19 pandemic continued on, America fell into economic crisis, social justice movements came to the forefront of our lives and people became obsessed with TikTok. Healthcare providers were touted as superheroes while some people became distrustful of scientists. This last year has been worse than anything most people could have predicted.

So why is it that the world’s richest billionaires continued to increase their wealth by 54%? Why have some businesses continued to profit when most other parts of the world suffer?

Many restaurants suffered from a mixture of the stay-at-home mandates in many states. People cooked more at home and many restaurants were unable to stay open or offer sufficient safe dining options. Meanwhile, according to credit card data from the research firm Second Measure, the meal delivery industry saw a 70% increase in spending with Grubhub, Doordash and Uber Eats seeing an increase in their customer base.

Gyms began to shut down due to COVID-19 restrictions and there were limited options of outdoor exercising, so another company that saw a major rise in popularity was Peloton, the stationary spin bike that shows instructor-led classes in the convenience of your own home. Peloton has done so well in the last year that they expect even higher sales than predicted as they now expect a full-year revenue to exceed $4 billion, a significant increase from their previously predicted $3.9 billion.

Unsurprisingly, Amazon saw a giant spike in sales, in part because of the pandemic as it was much easier to shop online than in person. The behemoth of a company was already a staple in many people’s lives but saw even more traction as COVID-19 surged. In the beginning months of the pandemic in 2020, the company acquired more than 175,000 new warehouses and added 36,400 more employees.

Amazon’s 2020 sales were at $386.1 billion, which was a 38% increase from the year before with profits doubling to $21.3 billion. The company even became a go-to spot for high-demand, low-quantity items—such as toilet paper. From February to March of 2020, toilet paper sales soared to 186% on Amazon. The company also described sales during the holiday season as “record-breaking.”

As a consequence of Americans hoarding toilet paper and spending more time at home, even toilet paper companies saw a huge increase in sales, as the sale of toilet-paper spiked to over 845%, which amounted to about $1.45 billion in the month of March of 2020 alone.

But perhaps the most successful as a result of the pandemic was Zoom. From May to July of 2020, Zoom saw bigger sales and profit than all of 2019 as the world transitioned into online learning and working. Zoom’s profits from the second quarter of 2020 were $185.7 million, a huge increase from its $5.5 million from the same quarter of 2019. The company reported an adjusted profit of nearly $1 billion, compared to their 2019 fiscal year of $100 million.

With the successes of major companies came great losses for small businesses. In August of 2020, Yelp saw 163,735 businesses that indicated closures with 97,966 reporting they will not be reopening. According to a survey by the Federal Reserve Bank, it was revealed that three out of 10 small U.S. businesses claimed they would not survive without further governmental assistance, which is an estimated nine million businesses who may potentially have to permanently close their doors.

In April of 2020, the unemployment rate was at a staggering 14.8% with over 23 million Americans unemployed as most of the U.S. had frantically transitioned into some kind of quarantine: many jobs were going remote or shutting down and people were being laid off. As of March of 2021, the unemployment has fallen to 6.0% with 9,710,000 million people still unemployed.

Large corporations survived 2020, profiting off of a global pandemic that has killed millions of people, while data shows that small businesses and the restaurant industry saw staggering hits.

Individuals should ask themselves if supporting companies—who do not need more sales—for the benefit of cheaper prices or more convenience can potentially come at the expense of small businesses which are often the backbone of communities. Individuals can decide how they spend our money. If this pandemic has illustrated one thing, it’s that supporting one’s community is one of the small things they have control over that can have a big impact.