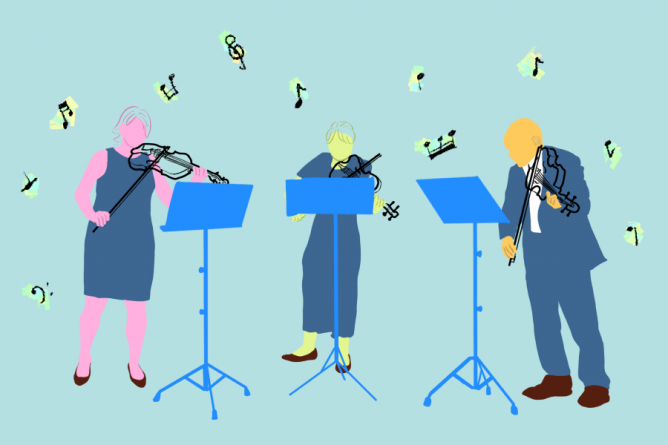 As a school year of Zoom meetings and online hangouts comes to a close, clubs and organizations in Davis are left to reflect on their experiences during the COVID-19 pandemic. Similar to other organizations, music ensembles have adjusted to a new reality without in-person meetings.

Makenna Stever, a third-year applied mathematics major and the president of The Spokes, joined the all-female a cappella group her freshman year and has loved it ever since. Auditioning on a whim, Stever stated she didn’t expect to find such a meaningful extracurricular and community.

“It was the niche that I didn’t expect to find in Davis,” Stever said. “It’s been my absolute favorite extracurricular my entire college career.”

Under normal circumstances the group rehearsed for five hours every week and performed at gigs and a cappella group showcases. Since the pandemic began, the group has lost the experience of singing together. Instead, The Spokes meet on Zoom to learn music pieces as a group and practice separate parts in different breakout rooms. The music pieces are created by group members individually recording themselves singing their part which is then sent to the group’s music producer who combines the recordings into a finalized version.

Moreover, the group has made content with these pieces through music videos posted on YouTube. Stever shared the process of perfecting the group’s sound for these audio pieces when they cannot meet in person.

“It’s definitely been hard to figure out stuff like trying to make sure that everyone has the same tone and that we’re all blending together,” Stever said. “What we’ve been doing with that is our music director will hold little office hours during rehearsals sometimes, where if we’re learning a piece and we’re submitting audio recordings, you can come to her and show her your recording, and she’ll give you tips on it, she’ll try to make sure that you’re matching her sound.”

Additionally, Stever shared that this year’s singers were mainly composed of new members because the majority of the group graduated last year.

“Most of the members in our group have never sung in an a cappella group before, are brand new and all they know is [COVID-19] rehearsals and individuals recording and learning music distanced,” Stever said.

Despite her continued love for The Spokes even throughout the pandemic, Stever said she misses singing in person with the group and looks forward to the time when it will be safe to do so again.

“It was something before [COVID-19] that I looked forward to every day,” Stever said. “And I definitely still feel like I’m a part of something now. I love this group and I will always love being in The Spokes. I just do miss that in-person component and being able to stand next to someone and hear the music live because that’s something that we haven’t had at all this year.”

John Agpalo, a second-year mathematics major and the treasurer of The Liquid Hotplates, is finishing his second year in the coed a cappella group at UC Davis. Coming from a performing arts high school and with a choral background, Agpalo knew he wanted to join a singing group in college and found The Liquid Hotplates to be a perfect fit.

Before the pandemic, the group would meet every week to practice songs and go over choreography, preparing to participate in competitions like the International Championship of Collegiate A Cappella (ICCA) along with performing at events and gigs.

Today, the group rehearses online, and according to Agpalo, has gone from focusing on choreography to video editing while preparing for online competitions.

Agpalo explained the new process of creating music that took place this year.

“We each record our part of the song, which we send to our sound engineer to piece together and make us sound beautiful,” Agpalo said via email. “We tried singing together on Zoom or Discord, but because of latency, lag or just bad internet, it’s hard for everyone to synchronize and sing at the same time.”

While the group participated in a yearly retreat and small gatherings in the past years, Agpalo shared that it is difficult to meet with his fellow members under the circumstances of the pandemic.

“For the future, we hope that it becomes safe enough for everyone to meet again on campus for our rehearsals face-to-face; I think we […] all just want to see each other again and get back into the old groove of singing and dancing together,” Agpalo said.

Professor Caleb Lewis, a lecturer in music and the director of choirs at UC Davis, leads three choral ensembles open to students and community members. Before the pandemic, each choir met twice a week for two hours to sing and rehearse for concerts together. When the pandemic initially began, Lewis focused on classes about music history and theory while also doing guided listenings and warm up sessions on Zoom.

Since fall, however, Lewis has created a routine for virtual projects.

“We put all the choirs into one group, and we met twice a week on Zoom for a little vocal warm up and a Q&A session [and to] practice some new training stuff,” Lewis said. “Then we do the recording projects where I’d make practice recordings for everybody with a click track, […] they spend a lot of time on their own learning the music, they send it in and then we compile it together.”

In addition to the online meetings and recordings, Lewis has set up slots for one-on-one meetings with singers in which they can seek help on their parts. Since Spring Quarter, however, the groups have been able to meet in small socially distanced groups outdoors, separating back into three ensembles.

Lewis shared that the social element of the choral groups has grown in isolation, and students have formed friendships while chatting over Zoom.

“I’ve been really pleased by the enthusiasm and the longevity of a lot of our singers: They just keep showing up,” Lewis said. “Because even though they can’t hear each other singing, they like to see one another, and it feels like we’re together in isolation.”

Lewis shared that while the experience this year is different than normal, the group continues to provide a sense of togetherness that keeps people singing even online.

“One of the things about music, and singing especially, is that it brings people together who otherwise would not be together at all,” Lewis said. “And that’s what’s really great about it, and I think that people miss that. They just know that it’s a place where [they’re] welcome, and that they can come together. I hope that that’s what keeps bringing people back.”