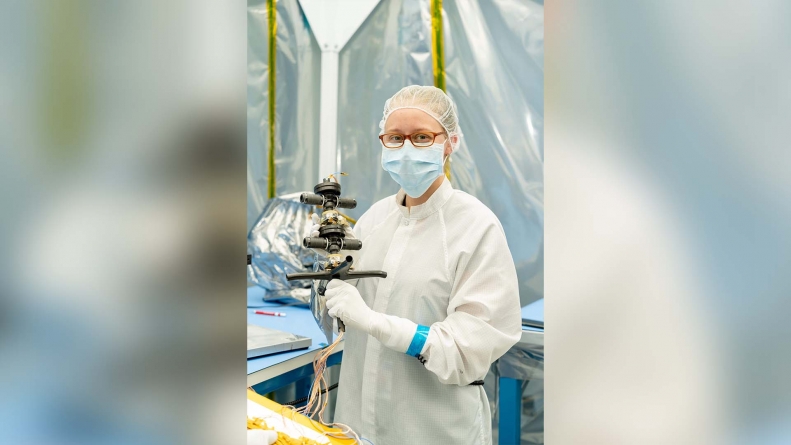 Sara Langberg, a UC Davis 2016 graduate, details her experience in bringing Ingenuity to life and how her studies at UC Davis led to her work with NASA

Sara Langberg, who graduated from UC Davis in 2016 with a degree in mechanical and aerospace engineering, has helped to build and test the first ever helicopter to make a powered, controlled flight on another planet. The experimental helicopter, Ingenuity, first arrived on Mars attached to the Perseverance rover on Feb. 18 of this year and made its first successful flight on April 19, followed by a second flight on April 22. Perseverance is the fifth rover to be sent to Mars.

“It was absolutely surreal and breathtaking to see the video come back and see images of it flying, to see pictures that it had taken of its shadow on the ground using its navigation camera,” Langberg said. “We were really excited to get that imagery back and to get the data back and see that it had finally flown.”

Langberg said that during her time at UC Davis, she had never anticipated being able to help innovate the first helicopter to lift off the surface of the red planet. This project could ultimately lead to new discoveries, such as seasonal water, by capturing images of environments that are inaccessible to rovers.

“I get the question a lot: ‘Is this my dream job?’ and I’ll be honest—it’s not my dream job because I never could have imagined working on a project like this,” Langberg said. “It’s just mind-boggling how cool this project is, and I’m so honored to have been a part of it.”

According to Langberg, she’s been conducting work on Ingenuity for about five years, starting when she graduated in 2016. An internship that she began in the summer between her junior and senior years at AeroVironment, a company that manufactures unmanned aerial vehicles, led directly to her working on the project when the company began a partnership with NASA’s Jet Propulsion Laboratory (JPL).

“AeroVironment has been […] partnered with JPL starting [in] 2013, so we’ve been working on this for a really long time,” Langberg said. “It’s been more than just a year of waiting, we’ve really put our heart and soul into this project.”

Mars’ atmosphere is about 1% of the volume of Earth’s atmosphere, making it the second thinnest atmosphere in the solar system, which created unique challenges while designing Ingenuity. According to Langberg, Earth-based helicopters usually aren’t suited for flying above an altitude of 10,000 feet. The atmosphere of Mars equates to a much higher altitude on Earth.

“It’s similar to flying at roughly 100,000 feet on Earth, and very few aircraft have even gotten close to that, one of which is some of our own high altitude, long-endurance aircraft that AeroVironment has done,” Langberg said. “Using what we learned on those programs, especially for propeller design, fed directly into the design of Ingenuity.”

Langberg gained much of her hands-on experience with machinery at UC Davis’ Human/Robotics/Vehicle Integration and Performance (HRVIP) Lab, where she was mentored by Stephen Robinson, a retired NASA astronaut, a professor of mechanical and aerospace engineering and the director of the lab.

“I’m very lucky to have connected with [Robinson] like I have, he’s really encouraged me academically and professionally and really opened my eyes to what’s possible,” Langberg said.

To celebrate Ingenuity’s status as the first helicopter to perform controlled flight on another planet, a piece of fabric from the original Wright Flyer, the first airplane to take flight on Earth, was attached to the helicopter.

“A small scrap of that fabric is wrapped around the cables that attach the solar panel to the rest of the helicopter,” Langberg said.

Langberg offered advice to UC Davis students who aspire to make similarly impactful contributions to mechanics and aerospace engineering in the future.

“You’ll learn ten times what you can in the classroom by building things and learning how things go together,” Langberg said. “The classroom stuff is important too, to help you get to that point, but there’s nothing that can replace the hands-on experience of building something for yourself.”
Written by: Lyra Farrell — features@theaggie.org