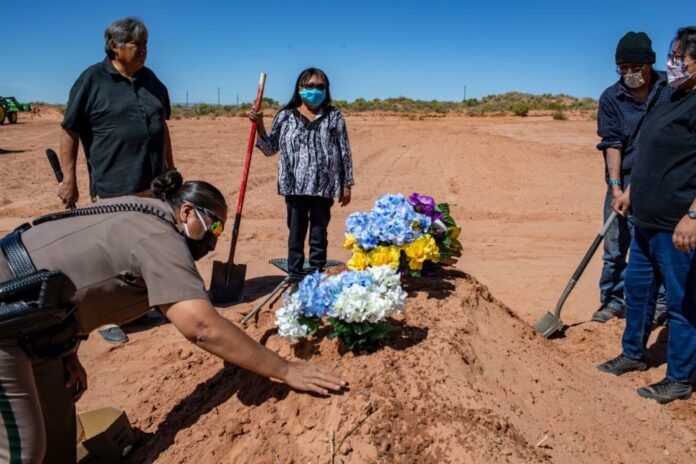 Native Americans are excluded and mischaracterized in COVID-19 data, undermining the severity of the pandemic’s impact on their community

How does the collection and portrayal of data influence public perception of an issue? The presence of data during a pandemic is a source of consistency and comfort. It connects you from your screen to every disembodied death toll, new COVID-19 case and now vaccination numbers. Data is consistent: its perceived neutrality removes it from an untethered, qualitative human nature that is hard to process.

Data, however, is not entirely untouched by the individual or institution. Recognizing the malleability of data and the human hand that shapes it does not weaken the power it holds, but rather awards it a new power central to how data has the ability to quantify and add value to things and people, thus responsible for the making of worlds.  Public health data represents a type of responsibility that on one hand is grasping at the lives of those in need and on the other  holds the solutions to aid them.

So what about the groups who do not have a hand in data and are grasping for entry into public conscience?

Yet in the first year of the pandemic, Native Americans have been erased, mischaracterized and rewritten out of public health data. An analysis by The Guardian revealed that of the 80% of state health departments which released racial demographic data about COVID-19, half of these states did not include a separate category for Native Americans and relinquished them to “other.” Even in areas with large Native populations, states like New York and California did not include Native Americans at all in their data collection at the time the study was conducted.

Other data collection problems persist as well, such as mischaracterization and listing the incorrect race on death certificates. In California, doctors often assume a person of Native descent is of Hispanic or Latinx origin because of their surname. Because of this racial misclassification, the data on COVID-19 for Native Americans may be more drastic than reported.

In doing so, the stories, needs and disparities experienced by Native Americans are not weaved into the narrative of public health data and are instead written out of existence. If data can “make up worlds,” the way public health data is collected creates a reality where Native Americans are excluded from resource allocations, media coverage and public awareness. It is in this vein that data can be weaponized against a community—by erasing problems from existence through exclusionary or careless data collection, we bear no social responsibility to them.

Behind each dataset is an individual and institution with a situated viewpoint that is limited to their singular set of experiences. When so few standpoints arrive at the table, the way that data is collected and produced conceals issues and populations from necessary discourse.

The ongoing data collection issues faced by Native Americans have persisted for years, according to Abigail Echo-Hawk, the director of the Urban Indian Health Institute who has spoken at workshops and testified before Congress for the ethical inclusion of Native Americans into public health data.

Public health data has not only failed to include Native Americans in an essential data narrative, but has made accessing existing information an uphill battle. Echo-Hawk’s institute, along with other tribal epidemiology centers, were initially denied access by the Centers For Disease Control from data about COVID-19 testing and cases due to privacy concerns, although this data was made available to states.

The lack of ethical inclusion of Native Americans in public health data is an example of “undone science,” where research is underfunded, incomplete or ignored despite community groups and activists urging its importance. As Native American communities and activists fight for inclusion into data that has systematically excluded them, it is more essential than ever to recognize how data can be weaponized to erase people from our public conscience because ignorance becomes organized.