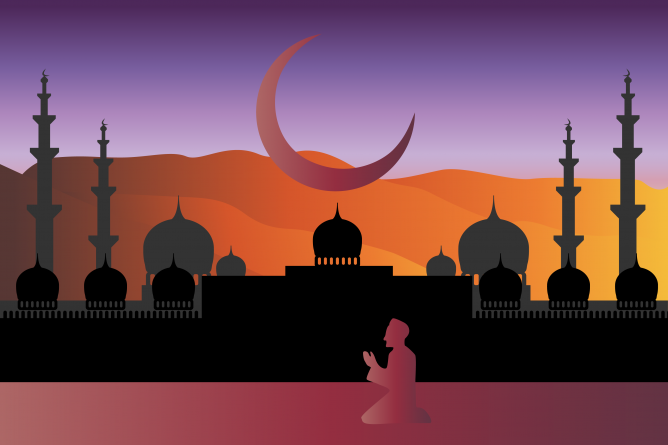 Students share their experiences handling COVID-19, being full-time students and trying to fast for over 16 hours a day

Currently, roughly 1.8 billion Muslims worldwide are celebrating their second Ramadan during a pandemic. From sunrise to sunset, practicing Muslims all over the world will not eat a single bite of food or drink a droplet of water. This year, Ramadan, the Muslim holy month, began on April 12, and will last until May 12, 2021.

Ramadan is a 30-day time period, usually the ninth month of the lunar-based Islamic calendar, where practicing and able Muslims fast from sunrise to sunset. So why do Muslims fast and how do they celebrate Ramadan?

Firstly, Ramadan is one of the five pillars of Islam and is a commandment for those Muslims who have the resources and physical ability to engage in the practice of fasting. It is also the month in which it is speculated that the Quran was revealed to the Muslim Prophet Muhammad.

For Muslims, it is the holiest month, as Allah’s Messenger said, “When the month of Ramadan starts, the gates of heaven are opened and the gates of Hell are closed and the devils are chained.”

“First and foremost it’s a commandment,” he said. “God commanded us to fast and so we do. A lot of it is about depriving yourself of materialist, worldly things and the things that aren’t spiritual.”

Rawan Karaki, a fourth year biological sciences major, related to this belief: “To get closer to Allah is the main point of the month of Ramadan.”

Practicing Muslims will usually wake up before sunset to have their pre-fast meal, known as suhoor, around 4:00 a.m. They will then most likely engage in the first of the five daily prayers, Fajr.

Throughout the day, practicing Muslims will try to pray each of the five prayers, which includes Fajr, the prayer before sunrise, the afternoon prayer Dhuhr, the late afternoon prayer ‘Asr, the sunset prayer Maghrib and the final evening prayer ‘Isha.

They will then break their fast once the specific time of the sunset has occurred, a practice known as iftar, which includes the first bite of food since sunrise and then usually a large dinner or feast.

Those who are exempt from fasting are often those who are pregnant, have an illness, are traveling, those who menstruate and young children.

There is some discussion regarding exactly what actions break a fast, however, the general consensus is that a fast is invalidated when one engages in any of the following: intentional eating and drinking, intentional vomiting, engaging in sexual practices between spouses and other sexual behavior.

Many regular practices can even break a fast, such as applying make-up or nail-polish or even listening to music. A fast is also undermined when a Muslim engages in cursing, lying, gambling and practicing other sinful behaviors.

In addition, another intended effect of fasting is to bring Muslims’ faith closer to their creator and for them to empathize with the suffering of the less privileged.

“One most basic reason is to feel with the poor even just for 30 days, because they don’t have the blessings and privileges we have,” said Cenna Abboushi, a third year neurobiology, physiology and behavior major. “When you fast, we feel that empathy. It’s good once a year to refresh your body and mind.”

Muslims celebrate Ramadan in their own subjective ways, but one common sentiment is building a sense of community and breaking fast together.

The act of breaking fast with family and friends is one thing many Muslims have been unable to do because of COVID-19.

“Celebrating Ramadan during the pandemic has definitely been challenging,” said Malika Haji, a second-year managerial economics major. “I’ve been doing my best to make the most of Ramadan by attending daily [virtual] meetings with other sisters in the community and reciting the Quran every night.”

Abboushi shared discontentment with the transition into celebrating Ramadan through a virtual format.

“It’s not as much of a big celebration,” Abboushi said. “In Davis it now feels like a chore because you miss the community. With my roommates, [we] try to eat iftar together or read the Quran together. For my friends who have been vaccinated, there’s really small gatherings [we have].”

Ramadan during a regular year is difficult, but during a pandemic it is made even more difficult, as there is such a lack of community interaction and support.

Despite continued struggles of celebrating Ramadan during a pandemic, Altamimi explained improvements this year in light of eased restrictions.

“Ramadan is definitely community-based so not being able to gather with friends and family as much as pre-COVID times really takes out an important part of this month,” he said. “But this Ramadan is better than the first pandemic Ramadan because there are now less community restrictions due to advancements with the COVID situation.”

Karaki echoed this sentiment: “Because of the pandemic there is less getting together with friends and family so Ramadan can seem a bit lonely in a way,” she said. “But I am grateful to be able to at least celebrate Ramadan with my direct family.”

In addition, there is also the added stress of being a full-time college student who is fasting during a pandemic—which can be quite a struggle.

Since many colleges do not make official accommodations for many fasting Muslims who are also taking classes, some students say that practicing can be challenging.

“It’s been rough trying to make time to perform religious activities when balancing school, extracurriculars, work, and a pandemic on top of it all,” Haji said.

Abboushi agreed: “Being a student, the most difficult part is fasting without being home with your family, just because when you are at home, your family is preparing meals and you go to the mosque after. I have to focus on school all the while I can’t eat. And I have to worry about having to prepare my meal, which is basically taking more time from my study time to prepare the food to break fast.”

Yet, Ramadan is also a celebration and something many Muslims look forward to, even with the loss of meals and constant dehydration.

“[My favorite part about] Ramadan is breaking my fast with my family,” Haji said. “There’s something about Ramadan iftars that just hit different. The food we prepare at home is unmatched and I look forward to it all year.”

Abboushi also appreciated the feeling of being connected to others and sharing a meal.

“[My] favorite part of Ramadan is the family and friend iftar parties, even if they aren’t happening this year because of COVID,” she said. “It’s the one time during the day everyone has to take a break from school or work and we all eat together. You get to see everyone and catch up on our lives and with people you haven’t talked to in a while.”

For Altamimi, spirituality is an important part of the celebration. “There’s this background of spirituality during Ramadan,” he said. “The major focus is to strengthen your relationship with God. And also the great food is a plus too.”

Karaki explained the feeling of accomplishment that comes with completing a fast.

“Besides being surrounded by family and friends, I would probably say that my favorite part would have to be the wonderful feeling of accomplishment you feel after you break your fast. It’s a really gratifying and humbling feeling in my opinion.”

One major event many Muslims look forward to is the smaller celebration known as the Eid al-Fitr, which in Arabic means “the feast of breaking the fast,” which usually falls directly after the 30th day of fasting.

For many Muslims, Ramadan is a month full of blessings, of becoming aware of one’s own privileges and abstaining from sinful behavior. According to these students, ramadan is a testament of practicing Muslims’ devotion to becoming both better human beings and becoming even closer to their God, especially as they continue their traditions in the face of a pandemic.
Written by: Muhammad Tariq — arts@theaggie.org