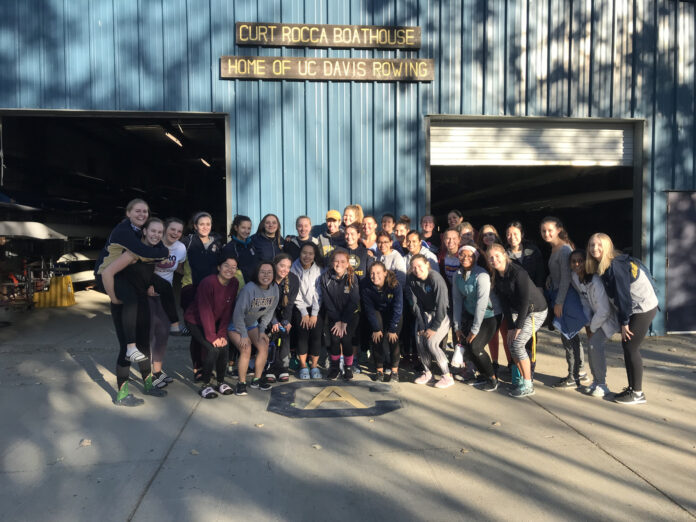 After high school, many students entering college look to join different sports teams to maintain their physical health or to explore a wide range of physical activities. UC Davis has a wide range of club sports that many people may be unfamiliar with, one of which is rowing.

The Women’s Rowing team is a competitive club with a long history at UC Davis dating back as far as 1977. Practicing out of the Port of Sacramento, the club is open to everyone and is another way students can connect with peers.

“I remember as a freshman, the first week, just because we wake up so early for practice, I thought to myself, ‘There is no way, I’m not going to be able to do this,’ but it’s so rewarding,” said Jill Kraus, the team’s travel manager and third-year English and psychology double major. “I found my friends pretty fast and that’s what helped me [to keep] going.”

Considering that their usual season is during the Fall and Spring Quarters, the UC Davis Rowing Club hasn’t competed since 2019 due to the COVID-19 pandemic. A number of the team’s players were juniors when they participated in their last competition—called a regatta—and will be graduating as seniors without competing in their three final seasons.

The women’s rowing team had their last formal competition in 2019. Both their Varsity 8+ and Novice 8+ teams competed at the national level for the American Collegiate Rowing Association (ACRA) before the pandemic began. The Novice 8+ successfully landed in third place and raced against some of the best crews in the U.S.

Since the pandemic began, all races, events and tournaments, including nationals, have been canceled. The crew team is hoping to potentially compete in a few races before the year ends, but they are aware that things have not returned to normalcy yet. It’s been almost two years since the UC Davis’s Women’s Crew team participated in a race that isn’t a scrimmage.

“We’re allowed to travel and race schools in California under certain conditions,” said Kraus. “There’s no one available for us to race, so it looks like we won’t be having any scrimmages and nationals, along with other tournaments that are canceled for the year.”

Although this year’s team cannot race, they still practice four days a week, with optional practices on the remaining three days. During practices, every rower is socially distanced and must wear a mask, and all equipment is heavily sanitized. Because of this, rowers aren’t allowed to see each other in person outside of practice.

A group of eight rowers requires all of its members to work in unison and be on the same page physically and technically, but keeping in touch with each other has been difficult.

“Usually getting to know each other would all be happening in the fall and so by spring everyone is close,” said team member Libby Polston. “Now we’re at the point where we still are getting to know people and new faces. And because we’re not racing, we haven’t done enough intense things that are fun to bring us even closer together.”

Every two weeks the team would get together for a movie night, game night or other typical social activity through Zoom, something that Polston said “wasn’t the same as in person.” Still, the team makes the most out of the situation by connecting with their teammates and creating opportunities to get closer to one another.

The team always tries to be filled with energy, especially during the pandemic, and being a good example for the rest of the team is important so that everyone can pass on positivity to one another.

“[We try to set the example by] being focused, being driven, putting the work in and then when you have a good row, [telling] everyone you have a good row,” said Polston. “A lot of people who come the first week leave and say ‘oh this is too hard.’ But everything is thrown at you the first few days, then you get the hang of it. Those first few days are a barrier to people and if they get through it, it will be worth it.”

Even though this crew team, along with other team sports, have fallen victim to the pandemic, they continue to maintain a determined and positive attitude toward rowing. They all look forward to being in the water and hope that they will be able to participate in another competition soon.

*If you would like to contact the team for more information, please visit www.ucdrowing.com.
Written By: Katherin Raygoza — sports@theaggie.org

Who’s under the most pressure to win the NBA title this season?

The rapid rise and fall of the European Super League