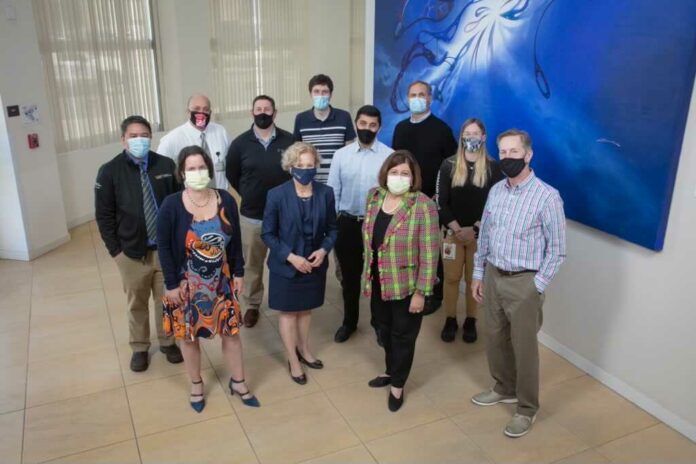 MILO, or Machine Intelligence Learning Optimizer, is used with mass spectrometry to rapidly identify the presence of COVID-19

The pandemic has lasted for over a year now with many travelling to health centers and venues to be tested and vaccinated daily. In light of the potential setbacks that frequent testing may pose, UC Davis Health has developed a new screening method for COVID-19 called MALDI-TOF-MS, or matrix assisted laser desorption ionization time-of-flight mass spectrometry, that can retrieve testing results within hours while maintaining a high level of sensitivity and accuracy appropriate for detecting infectious diseases.

Dr. Nam Tran, a professor of clinical pathology at UC Davis Health in the Department of Pathology and Laboratory Medicine, is the lead author of the study and helped develop the screening method and coupled it with machine learning to expedite the COVID-19 testing process. The current “gold standard” for testing has been reverse transcription polymerase chain reaction (RT-PCR), known to be highly accurate and sensitive but with the huge tradeoff of speed and time where results would not be received until days later.

“High-throughput PCR testing is unable to achieve turnaround times that would be compatible with businesses and schools,” Tran said via email. “It’s less than ideal to wait for hours or days for results. In contrast, we also have ultrafast PCR systems now at UC Davis Health that can test for SARS-CoV-2 and Flu A/B in 20 minutes. However, these only test one sample at a time. Both the above solutions are also expensive and require various supply chains common to anyone doing molecular testing.”

The major problem of PCR, aside from its speed, was the shortages in the supply chain, where the reagents necessary to run the test are often unavailable.

“The problems that arose were supplies,” Tran said via email. “Everyone in the world was competing for the same samples. As different places came up with alternative methods to bypass supply chain problems, we now have issues of different tests with varying degrees of accuracy and precision. Not all PCR tests are created the same.”

The proposed method in the study went on an alternative route of antigen-based testing to detect proteins rather than the typical RNA test, which produced results at much faster speeds. Dr. Hooman Rashidi, a professor and vice chair of informatics and computational pathology at UC Davis and the AI director for the UC Davis Medical Center, described the advantages and disadvantages of antigen-based testing that the team had agreed to optimize with machine learning.

“The antigen-based method is definitely way faster,” Rashidi said. “Instead of a few days and batch testing, they now can do them in four or five hours. But the antigen-based assay, if you see the performances and in the paper where we give a list of the most credible ones, their performance measures are not even close to those of the PCR method.”

The poor performance of antigen-based tests as compared to the current PCR methods were resolved with an automated machine learning platform called MILO, or Machine Intelligence Learning Optimizer, of which both Tran and Rashidi were involved in developing. Coupled with the mass spectrometer machine used, COVID-19 test screening could be expedited without sacrificing any performance measures or running into supply chain shortages to be as accurate as the gold standard of the PCR method.

The mass spectrometer MALDI-TOF shoots a laser at the sample to fragment the molecules into ions that produce a readout of analyzable signal peaks. MILO helps to read these signals and identify whether a specific infectious disease is present or not.

“For the COVID-19 test, MILO finds distinguishing patterns among the many mass spectrometry peaks and signals and deciphers which patterns correspond to the presence or absence of the SARS-CoV-2 virus in the samples,” according to a recent UC Davis Health press release. “MILO accomplished the analysis in a fraction of the time that a non-automated machine-learning approach would have taken.”

“The major problem with mass spec is that it gives you a ton of peaks,” Rashidi said. “Imagine that you now produced hundreds and thousands of peaks, so it’s not humanly possible to figure out which peak patterns are specific for somebody who has COVID or somebody who doesn’t have COVID. The power of our MILO platform is that it can do this in less than a day. It’s like having 50 to 100 data scientists doing the work for you virtually. And that’s the game changer of having something that powerful that can actually evaluate all of those peaks, identify these peak patterns, and then ultimately to get these peak patterns to say yes or no, but also be able to change with changing populations literally within a day.”

Rashidi did note, however, that this new screening method with MILO coupled to mass spectrometry does not replace PCR methods. Rather, it is a highly efficient screening method, and the true confirmation method is still the PCR test. With the advent of such a powerful tool for screening, Rashidi alluded to how this method of screening can be further extended to future infectious diseases.

“The goal is not just for COVID testing,” Rashidi said. “The goal is also this whole process—this whole pipeline—that we’ve built with our MILO machine learning platform with mass spectrometry and other things that are basically infrastructural stuff that are around them. These are things that we’ve put together that can easily be applied to the future pandemics.”Written by: Brandon Nguyen – science@theaggie.org