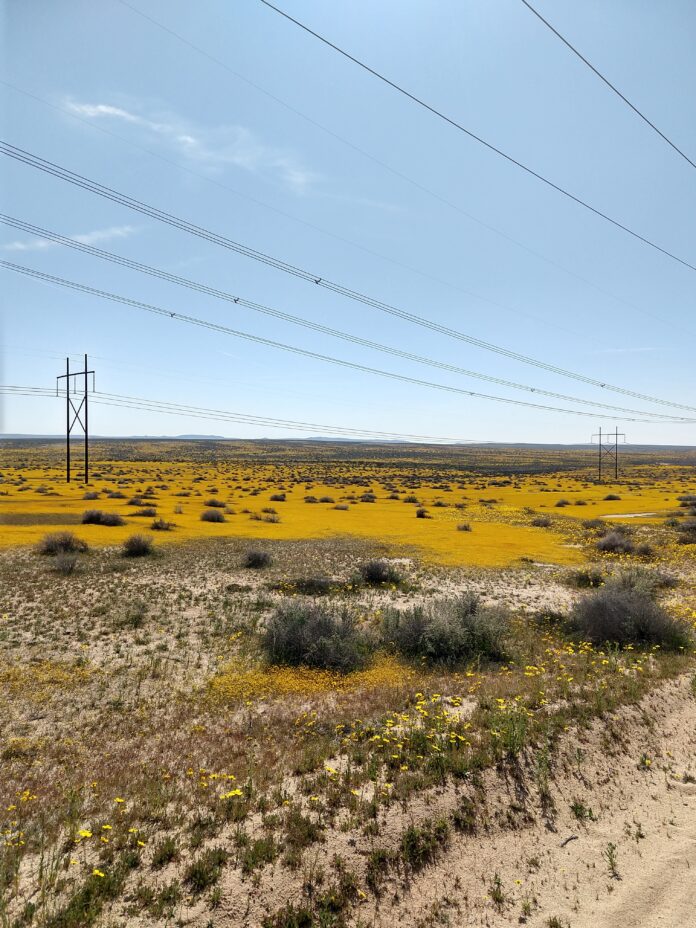 E. wallecei and Eriophyllum mohavense in the Mojave Desert studied by an associate UC Davis professor, among others

According to the study, new rainfall runoff and shade conditions are created by large-scale photovoltaic solar energy facilities that are being developed in desert regions. The researchers measured the impacts of ground-mounted infrastructure on both E. wallecei and Eriophyllum mohavense.

“People will have a sensitive species that they are worried about and won’t have any data on it, but they do have data on a closely related species that is not as sensitive or sensitive at all,” said Karen Tanner, the lead author and Sea Grant Fellow at the San Francisco Bay Conservation and Development Commission. “The hope is that if the species have a similar enough history and ecological niche, the response to the common species may indicate how the rare species may respond.”

However, Tanner said that the results of the study revealed that this method was not effective in deducing how the rare species would respond.

“In natural resource management, managers have to make these decisions about how to protect a species,” Tanner said. “Sometimes we don’t have a whole lot of data on the species. When species are rare, it could mean that they are hard to find. It also could mean that there are logistical and regulatory constraints on what you can do to study them.”

Tanner further explained that it can be difficult to make informed decisions about managing species if not a lot of data is available. Tanner said that the Mojave Desert—where the researchers gathered their data—is hot, dry and characterized by extremely variable rainfall.

“2011 was a super bloom year,” Tanner said. “That was extremely fortunate for us. The next year, we got to all the places where we collected the first-year data, and it was a very dry year and not a single plant came up. It can be really challenging to study annual species in the desert because they can be very abundant one year and totally absent the next.”

The comparison between 2011 and 2012 revealed a critical consideration that must be taken into account when gauging potential environmental impacts of these development projects.

“When you consider the story of 2011 versus 2012, it’s really problematic if you’re just going out and doing a survey to establish whether or not there are any species on site that you need to be concerned about [especially] if you’re going in a year where you’re not going to see anything,” Tanner said. “When you send people out to do these biological surveys, you can’t send people out to do them in a super dry year and feel confident that you’ve detected everything that may be present.”

This research was funded by the California Energy Commission.

“Transferring the knowledge gained from this study to solar developers, permitting agencies and other stakeholders is a key step,” said Michael Ward, a media officer at the California Energy Commission, via email. “The researchers are doing exactly that through publication of the final project report, journal articles […], on their website and through public presentations.”

Ward also stated that the California Energy Commission may apply the results of these studies to their ongoing projects.

“California Energy Commission staff may derive broad applicability from such studies on photovoltaic energy generation and apply it to projects within its jurisdiction, such as concentrating solar thermal, as well as to our ongoing work to support the Desert Renewable Energy Conservation Plan, which directs energy development within habitat managed by the Bureau of Land Management throughout the state of California,” Ward said via email.

In the future, Ward would like to study exotic invasive species in the desert.

“We do have exotic species in the desert that we’re concerned about,” Ward said via email. “Sometimes these companies, I believe, are required to control populations at their sites to make sure that they don’t get out of hand.”
Written by: Aarya Gupta — science@theaggie.org