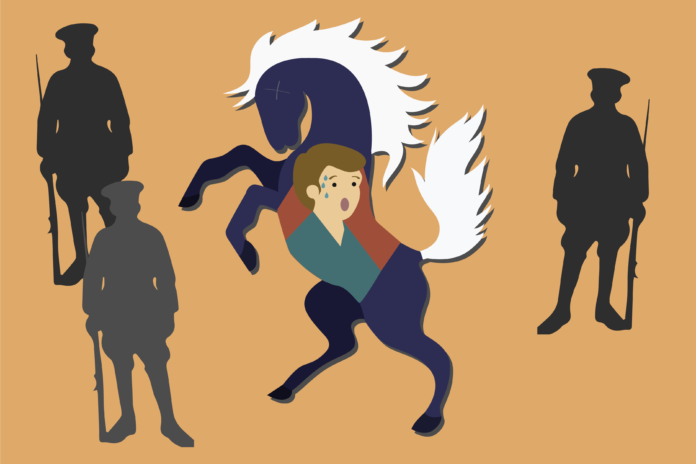 After a recent outbreak in the UC Davis genetics department, multiple stories have been unearthed from the wreckage. While some were already well-believed, like the fact that UC Davis actually made the tomato in the 1940s or that the on campus turkeys were just a botched experiment attempting to replace campus security with poultry participants. But none are quite as astounding as the true inception and birth of UC Davis’ incredibly mild mascot, Gunrock.

Apparently back in the ‘80s administration from UC Davis and UC Berkeley made a bet to see which could create a more terrifying and unsettling mascot. Misinterpreting what “creating a mascot” meant, UCD researchers played with the power of gods and accidentally created an entirely new species of horse by mixing human DNA, horse DNA and a whole 7-Eleven’s worth of Blue Raspberry Slushie. The end result: G.U.N.R.O.C.C. (Genetically Unique Neurotic Running Organism of Calamitous Catastrophe), was then released to compete against UC Berekely’s O.S.K.I. (Organism of Sociopathic Killing Intent). And while Gunrock may have been a marvel of biological sciences, the fact that Oski was a man in a suit deemed it far creepier than the genetic abomination; thus UC Berkeley won the competition.

But with the millions upon millions of tuition money the school wasted on the questionable competition, Gunrock could not simply be tossed into Putah Creek. In a hail mary effort, the school branded Gunrock as the school’s mascot, confusing students everywhere and pushing the boundaries on the definition of the word “horse.” The current history of Gunrock is also apparently another ruse created by the university to hide his true origins—everyone knows that horses don’t actually exist and were made up by Hollywood to sell cowboy movies.

Regardless of all the lies and cover-ups surrounding the blue bastard child of UC Davis, he still remains our mascot to this day. Because it doesn’t matter that horses aren’t dark navy blue, or that they don’t have eyebrows, or that they don’t walk on two feet, or that they don’t do backflips or that in the wild horses come in every other UCD color EXCEPT blue. He is a staple of UC Davis and while we may never get rid of him and replace him with our true mascot—the Tercero cows—we can accept him for what he is now. Just another weird horse mascot that we made blue because a bunch of underpaid grad students broke into a 7-Eleven back in the ‘80s and stole a slushie machine.