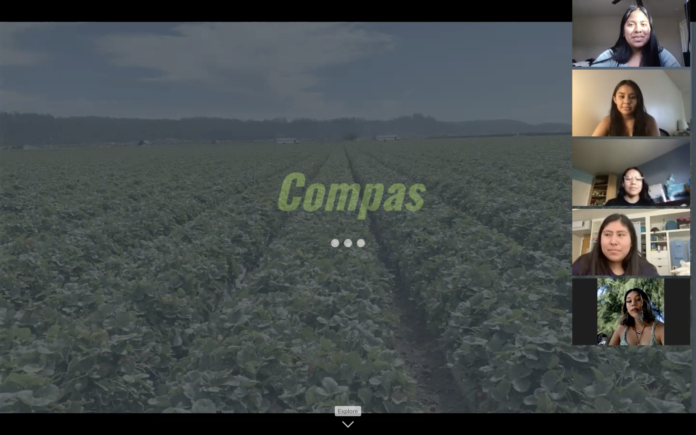 Compas at UCD, a new student-run branch of an organization originally founded at UCLA, is dedicated to advocating for farm workers and their families. Compas hopes to help the children of farm workers pursue higher education and overcome the language barriers they may face as immigrants in the U.S. The organization is mostly made up of members who have either had firsthand experience working in agricultural fields or are the children of farm workers.

Yesica Guzman, the administrative director and one of the founders of the original UCLA branch of Compas, said that she came to recognize a need for Compas as someone who has been working in agricultural fields since the eighth grade.

“Just seeing the exploitation, that even children were not protected by labor laws […] it just seemed like an issue that really needed to be brought up,” Guzman said.

Luz Lopez, a first-year political science and public service major and the administrative director of Compas at UCD, initiated the new branch of the organization.

As someone who has worked in the strawberry fields alongside her parents since she was a child, Lopez said that she has seen many of the harsh conditions farm workers may face, one of which includes the California wildfires.

“The skies were orange and there were ashes on the strawberries,” Lopez said. “Your eyes would get watery because of the smell and the ashes that were flying around the air were really strong. I usually cover[ed] my face with a scarf. It still didn’t help that much—I would still get watery eyes and it would be hard to breathe.”

According to Lopez, in addition to the struggles workers faced because of the fires, such as being exposed to severely unhealthy air quality without receiving emergency leave, their employers may terminate them for failing to pick enough quality crops, regardless of the season.

“My parents actually got fired […] because [their employers] were expecting high-quality strawberries, and it was at the end of the year, which is when there are no strawberries, and because of that a lot of people are actually fired,” Lopez said.

Because of this, Lopez said, Compas hopes to give farm workers the tools they need to advocate for themselves when they face similar situations.

“Compas is working on bringing awareness to these issues and trying to at least help farm workers get a little more information on how they could defend themselves and stand up for themselves in the strawberry fields,” Lopez said.

Being a firsthand witness to the treatment of farm workers, Guzman said that one of the main contributing factors to farm worker exploitation is the fact that they aren’t included in certain labor laws. The National Labor Relations Act (NLRA), created in 1935, gives employees the right to form unions and engage in collective bargaining, but farm workers are not protected by this act. Their exclusion from the NLRA means that farm workers may be fired for attempting to organize a union or collectively asking for increased pay. Although farm workers can now receive overtime pay in California, the Fair Labor Standards Act, which gives employees the right to time-and-a-half pay, still doesn’t apply to farm workers in many other states.

Due to the long hours many farm workers with children spend in the fields, it is often difficult for them to help educate their children, according to Marylou Escobar-Gonzales, a second-year sociology and human development major and the outreach director of Compas at UCD. Because of this, Compas provides mentorship services over Zoom to children of farm workers to help them learn English and provide companionship services. Escobar-Gonzales said she did not have access to these resources as a child of farm workers.

“When we were growing up ourselves, we didn’t have that type of mentorship,” Escobar-Gonzales said. “Our parents were out for several hours of the day, probably at most sometimes 12 hours of the day, so we only really had ourselves and our close family, […] and most of our parents are immigrants who did not get an education themselves.”

Compas at UCD’s main method of outreach has been contacting the families within the direct sphere of the members of the organization.

“We sometimes know that our family or our family friends struggle, so whenever they do, we’re just like, ‘Hey, I’m in this club, and we do this; are you interested?’” Escobar-Gonzales said. “From there, we draw connections. But we hope to expand and reach more than just the people that we know. We want to expand throughout California, not just the main hotspots.”

Escobar-Gonzales said that through Compas, she’s gained a new perspective on having parents who work in the agricultural sector.

“Compas has made me realize that there’s no shame in what your parents do and the job that your parents have,” Escobar-Gonzales said. “I remember growing up, I was kind of always ashamed and scared to tell people about what my parents did for a living. Now […] I feel like Compas has really truly made me realize that there is no shame in telling people, ‘Yeah, my mom is a farm worker.’”
Written by: Lyra Farrell — features@theaggie.org