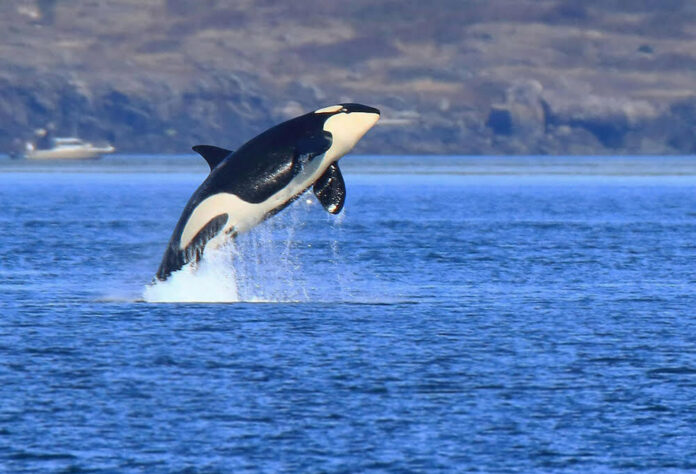 “Free Willy,” which came out in 1993, portrayed killer whales as beloved and personable animals rather than killers—quite different from public perception of the marine mammals in the 1960s and ‘70s, when they were commonly hunted and deeply feared.

And yet despite current public empathy for the animals, the killer whale population is still facing a multitude of threats resulting from human interference.

The SeaDoc Society, a donor-funded program of the UC Davis Karen C. Drayer Wildlife Health Center, is based on Orcas Island in the Salish Sea off the coast of Washington and British Columbia, and part of their mission involves studying southern resident killer whales. These whales are one of four populations of resident killer whales in the Pacific Northwest; the populations are separated by their own unique “culture,” a distinction which is tied to their main food source, hunting style, and auditory communication.

According to a post by the SeaDoc Society, the scarcity of salmon, as well as shipping traffic, boat noise and water contaminants have all factored into why only 75 southern resident killer whales remain in the wild today.

In an attempt to effect positive change, and in line with their mission to “[bring] together interested parties to share information, forge common understandings and design region-wide solutions,” the SeaDoc Society recently released a podcast series called “Pod of Orcas: Saving Southern Resident Killer Whales,” which is comprised of seven episodes that each feature a guest speaker.

The series is co-hosted by Justin Cox, who is the SeaDoc Society communications manager as well as the producer of the podcast, and Kevin Campion, a member of the Board of Directors at the SeaDoc Society. It explores various topics including whale culture, the history of captivity, the deep spiritual connection of the whales to the native tribes of the Salish Sea area and more.

Cox explained how the project began, saying that the organization would usually hold a series of events called “Ocean Nights” consisting of speaker presentations, film screenings and more, but this wasn’t held during the 2020-21 season due to COVID-19 restrictions.

“Ocean Nights wasn’t going to happen,” Cox said. “The idea of doing a series of Zoom calls over a weekend through the winter kinda depressed me. During quarantine, I messed around doing a podcast—one of those weird quarantine hobbies—and it surprised me how much I liked it.”

Cox went on to explain that he didn’t want a podcast that would go on indefinitely, given the amount of projects the SeaDoc Society was already working on. Instead, they needed a specific, directed topic—and they landed on the southern resident killer whales.

“This area of work is such a collaboration,” Cox said. “There were so many people we wanted to feature, shine a light on their work.”

Jason Colby, a history professor at the University of Victoria with a special focus on environmental history, was featured on episode three of the podcast. He emphasized how important he believes this collaborative viewpoint to be.

“I love how SeaDoc integrates different modes of thinking into one production,” Colby said. “The integration of different forms of knowledge… I wish they did it more. I wish historians talked to scientists more, and so on. And I think that podcasts are great for that, because they have the time to go in depth and explore topics from a variety of perspectives.”

Colby explained how he came to be personally invested in the story of the whales.

“My father was actually in the industry to capture orcas,” Colby said. “I had this bouncing around in my head for a long time because as a child I watched him struggle with guilt and try to come to peace with his part in this story.”

Colby then gave an overview of what he talked about on the podcast.

“How did we come to care so much about this apex predator?” Colby said. “For most of the colonial and national history of the U.S. and Canada, humans have had this fear of ocean predators. My interest was in the transformation of the relationship between people and orcas. What caused that?”

Cox detailed how he feels the podcast format enhanced the project’s effectiveness.

“A podcast can be a short series or a long ongoing thing, and my approach to making this one was [to] imagine a short, seven-chapter book where when you finish it, you feel like you’ve gained some sense of understanding,” Cox said. “I wanted it to be accessible, even to people who have no idea about any of this.”

Cox then described how this idea of accessibility translates into the SeaDoc Society’s overarching goal.

“SeaDoc Society is an educational society, but they specifically have a really big focus on science that makes an impact,” he said. “Translating complicated things into palatable things, which moves to caring, which moves to action.”

According to the SeaDoc Society’s website, this is even more important to their team than the scientific research that it builds upon.

“While performing world-class research is of paramount importance, ensuring that our findings effect positive change is just as vital,” the website reads. “One of SeaDoc’s unique strengths is translating science into action. We act as a catalyst.”

With the final episode of the podcast released on May 18, Cox talked about what he sees happening with the podcast’s platform moving forward.

“That feed is there, and while not totally knowing, it could be that feed exists where it constantly checks back in with killer whales,” Cox said. “It could bounce around from species to species. Being transparent, I don’t know what it’s going to be used for yet, but it’s definitely going to be used for something.”

Colby shared some final thoughts about the story of the whales and all of our parts in it.

“A hilarious misconception people have about history is that it’s only about people,” Colby said. “One of the deepest relationships we have is with the natural world. We transform the world, and it transforms us.”