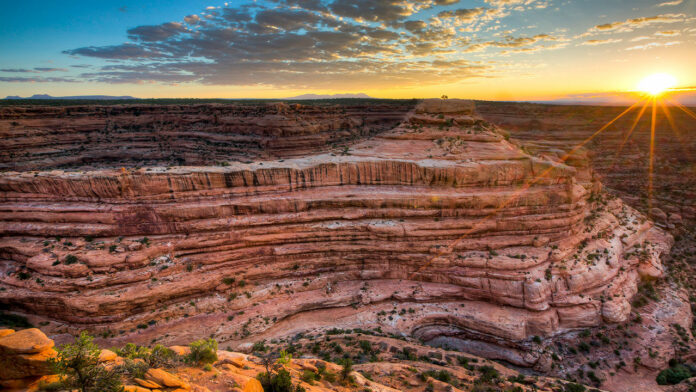 Near the very end of his last term in office, President Obama set aside roughly 1.3 million acres of land to be protected for generations to come. This area, larger than the state of Rhode Island, houses many culturally significant sites and artifacts. President Obama’s declaration felt like vindication for many after years of lobbying by a coalition of the Hopi, Navajo, Ute Mountain Ute, Pueblo of Zuni, and Ute Indian Tribes to the federal government. Unfortunately, the fight for Bears Ears was far from over.

“Our histories run deep. We relate to these lands who are alive. We know the names of the mountains, plants and animals who teach us everything we need to know to survive,” wrote a few of the founding members of Women of Bears Ears, an Indigenous advocacy organization, in a group Op-ed in the New York Times. “We have within our cultures a familial bond. We know these lands as a mother knows her child, as a child knows her mother.”

Less than a year after taking his oath of office, President Trump decreased Bears Ears National Monument by 85% or down to roughly 200,000 acres. In this sweeping reduction, he took away protections from several areas considered sacred by the coalition of Tribes. This move drew several lawsuits, as the legality of his actions under the Antiquities Act have been called into question

The motivation behind the Trump Administration’s actions are not mysterious by any means. The Department Interior, under then-Secretary Zinke, estimated that there was roughly 11.36 billion dollars worth of coal deposits in the Kaiparowits plateau. During the year leading up to the Trump administration’s decision, there also was significant lobbying on behalf of other Fossil Fuel and Uranium companies into both the federal and state governments.

Today, the Monument has no visitor center, no entrance signs and has seen an increase in visitors since the controversy. This has led to the destruction of many ecological, cultural and archaeological resources because of the increase in recreational use by visitors. Additionally, since the reduction, the area has been the repeated target of grave looting and vandalism. Because of the lack of infrastructure and funding by the federal government, even the areas that are part of the Monument have been difficult to protect.

“My real concern is the continual destruction of the sites, vandalism at the sites,” remarked Clark Tenakhongva, co-chair of the Bears Ears Inter-Tribal Coalition, in April to The Salt Lake Tribune. “Over the past five years, I would say, it seems like there’s more people coming once it was exposed as a national monument, particularly people from Utah.”

The original boundaries of the Monument teemed with history. Scientists studied dinosaur fossils millions of years old in its jagged canyons, and tourists flocked from across the country to visit its archaeological sites that tell the story of its inhabitants thousands of years ago. This rich cultural history and sacred significance to many Tribes prompted the Biden Administration to review the previous Administration’s reduction of the Monument. Now, the simple solution to this issue would be for President Biden to simply return the Monument to its original boundaries, and call it a day, right?

Well, it’s slightly more complicated than that. If Biden was to unilaterally return the Monument’s borders to its original state, legal questions around the Antiquities Act would never be resolved and the area’s protected status could continue to bounce like a game of ping pong between Presidents with different priorities. So what is the solution?

The protection of Bears Ears goes beyond protecting the land from ecological damage, the initial designation of the area as a National Monument came at the explicit request of a coalition of multiple Indigenous Nations. This is the first time in U.S. history that this has ever happened. The priorities of the Navajo, Hopi, Ute Mountain Ute, Pueblo of Zuni, and Ute Indian Peoples should be what are considered foremost in Biden’s decision of what to do with their ancestral lands.

This means carefully listening individually to what Tribal leaders want first, before even considering what a potential compromise could be in the area. The Biden Administration must both try to protect the long term cultural resources of the region, while also finding an immediate way to provide relief within the Monument’s boundaries. If you would like to support the fight to protect ancestral lands within Bears Ears, consider donating and signing up for the newsletter for the Friends of Cedar Mesa and the Women of Bears Ears.