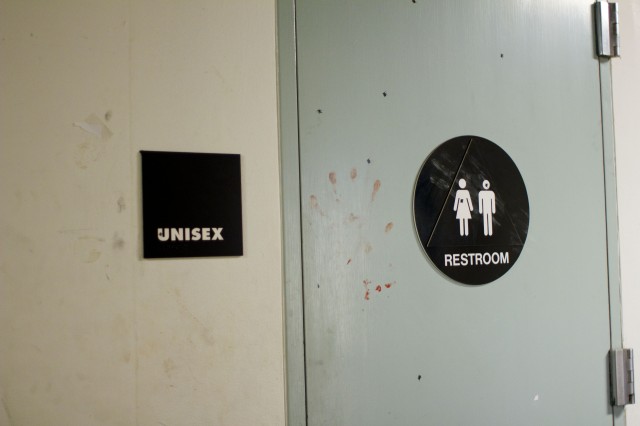 There’s no denying this school has some weird bathrooms. Let’s talk about it

Some may try to tell you that the icons of UC Davis are things like cows, water towers or bikes, but I argue our most iconic feature is the other-worldly vibes emitted from some of the campus bathrooms. We have it all, from lore to all-green tiling, and it’s high time these destinations throughout UC Davis get the appreciation they deserve. There are entire Reddit threads dedicated to the discussion of our restrooms, and while some may be fear-inducing, they must be embraced for what they are—weird bathrooms that have their own histories that might be best left untouched.

There’s no discussion of bathrooms at this school without a mention of the highly-rated single-person restrooms in the Spanish mission-style building we know as Hart Hall. Not only do these restrooms give plenty of privacy, but there’s enough extra space in this cement room for anything you might want—if you bring a desk and chair, it would be the perfect place to set up and finish up some missing assignments, or if you have a mat with you, the room is spacious enough for an entire Chloe Ting workout. Some might not have experienced these wonderful spaces yet, and I urge you to run, not walk, into the back entrance of Hart Hall come Fall Quarter 2021. Don’t ask why you’re given enough room to throw a small kickback, just appreciate the serenity and mystery of the Hart Hall bathrooms.

Then there’s Haring Hall, home to what are likely the most infamous bathrooms on campus. While the women’s restroom here is the standard multi-stalled neutral-toned setup, the random cluster of empty lockers and the rickety-looking bed frame is an entirely different story. While the lockers have no explanation, the qualified historians of Reddit have some theories (in other words, take these with a grain of salt). There are accounts of this bed frame existing in the Haring Hall bathroom for years now, and apparently, there was once even a mattress but that has been gone for some time. One interesting theory claims the bathroom bed was due to the mystery of women’s health decades ago, “they [the men in charge?] thought women would need a bed to rest on during their menstrual cramps,” according to Reddit user “Teacreama.” Regardless of its historical or medical validity, the idea that the women of UC Davis were provided with a resting spot only a few feet away from public bathroom stalls only adds to the lore of the Haring Hall bathrooms.

Perhaps the most hair-raising restroom discovered (so far) has been the women’s restroom in the basement of Hutchinson. Here, we have what some might call a step up from the steel bed frame; this is of course an old and oddly worn-in-looking cot, complete with a few loose chains on the floor. This room definitely curates its own puzzling aura, and I personally do not understand how anyone could use this restroom for anything other than a stop on a ghost hunt. In regards to this particular basement bathroom, every bone in my body is telling me to not look too much into its history or purpose, and just accept it exists.

As previously mentioned, another enigmatic restroom is the floor-to-ceiling emerald green tiling in the 24-hour study room of Shields Library (a peculiar place regardless of its “Wizard of Oz”-Esque bathroom). The first time I entered this bathroom I was running on minimal sleep and had just finished perhaps the worst essay of my liberal arts career—I was immediately taken aback. The lavishness of this deep emerald room compared to the fluorescent lighting and grey color scheme of the study room forced me to ask, had I been transported to a nightclub? Weeks later, I revisited this bathroom with a clear mind and got no further in my investigation. Along with the other mysteries of UC Davis restrooms, perhaps it is for the best that the secrets of this bathroom remain unsolved, that might be what makes them all so iconic.

This is in no way a fully exhaustive list of this school’s eerie and unexplainable restrooms, but hopefully, it gets you excited to go back to campus next fall and take all the vibes in on an extended bathroom break from a yawn-inducing lecture.