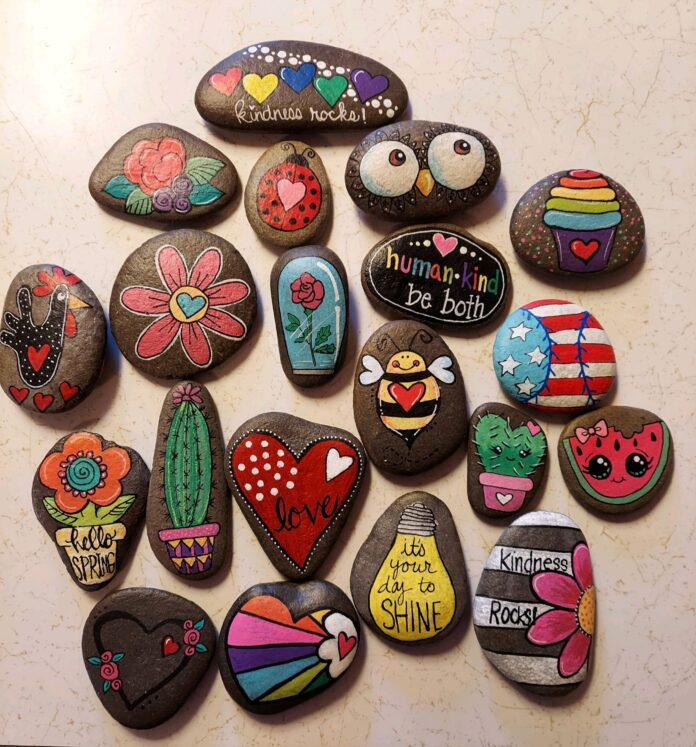 This rock painting community aims to brighten your day

As my years at UC Davis come to an end, I finally decided to let others know about my favorite thing about Davis: #UCDavisRocks, a Facebook community that paints rocks and hides them around campus for others to find. Kimberly Pearson, who works in The Arts Administrative Group at UC Davis, and her colleague Martha Garrison started the Facebook page in March 2018.

“I had found a couple rocks in my hometown of Esparto and joined their local rock group,” Pearson said via email. “Martha Garrison found some painted rocks in the Arboretum and I thought it would be fun to start a rock group here on campus. The name ‘UC Davis Rocks!’ just seemed to fit.”

Pearson found that what makes the UC Davis Rocks community so enjoyable is the encouragement and excitement she receives from individuals who find the rocks and post them online. On the back of each rock, there’s a reminder to post the found stone on the Facebook page.

“It has been fun doing group rock painting parties with folks on campus,” Pearson said. “I’ve gotten to know a few of the members of our group personally as well. Everyone has been very supportive and nice.”

Anyone is welcome to participate in this community by painting rocks and hiding them in their favorite spots. People are encouraged to keep the rocks or rehide them around campus for others to find. Nothing about this group is limited in its art, as rock designs range from beautiful flowers to uplifting quotes.

“[There are] no rules for the group other than spreading kindness,” Pearson said. “I write on the back of my rocks to please share on Facebook and either keep or rehide. Sometimes I will hide a bunch of rocks but not all or very few get posted. I just like to think they are out there making people happy.”

While some people paint rocks in groups or as a family bonding activity, Pearson likes to paint rocks by herself, using Pinterest pages for inspiration.

“I’ve always enjoyed art, but I’ve never thought of myself as an artist. I tell everyone that I’m just a good copier,” Pearson said.

The Davis community is one of many rock painting communities, all of which aim to spread a little bit of joy in the everyday routine and give someone a smile. Finding rocks is half of the fun; the rest comes from painting them and knowing that someone out there found your little creation on a random day.

“I love to paint the rocks. It’s very relaxing and stress reducing,” Pearson said. “I have a section of my kitchen counter set aside with all my art supplies so I can just sit down and paint at any time.”

When big holidays roll around, painters roll out the themed rocks that range from Snoopy Valentine’s Day hearts to black cats with witch hats for Halloween. I found a few Valentine’s Day-themed ones a couple of years back as I was on my way back to my dorm.

“I do love the fall themed rocks I do with leaves, pumpkins, scarecrows and Halloween images,” Pearson said.

There have also been instances where people specifically request rocks from Pearson and the group, which she was happy to do.

“I met one person that was a visiting student here from Brazil living with a host family here in Davis,” Pearson said. “She found a rock I believe and private messaged me about painting some rocks for her host family. I was happy to do so and actually painted some rocks for her to take back to Brazil with her. She was so appreciative and gave me flowers. We are actually friends on Facebook still.”

Both students and faculty are a part of the Facebook community that holds 984 members, all of whom look for rocks on campus. But the group is more than just a place to freely paint caring messages on stones—it’s also a community that cares about each other and hopes to bring comfort with the messages they write.

“There was one instance where a person from campus messaged me about painting rainbow rocks for a memorial service for a friend of hers who also had worked on campus that had passed away,” Pearson said. “This person had always loved rainbows and she wanted to be able to hand out a rainbow rock to everyone that attended. We had a rock painting party in her department and invited anyone from the UC Davis Rocks group to come help paint rainbow rocks. We painted over a 100 rocks.”

Review: “Marcel the Shell With Shoes On” and his growing stardom