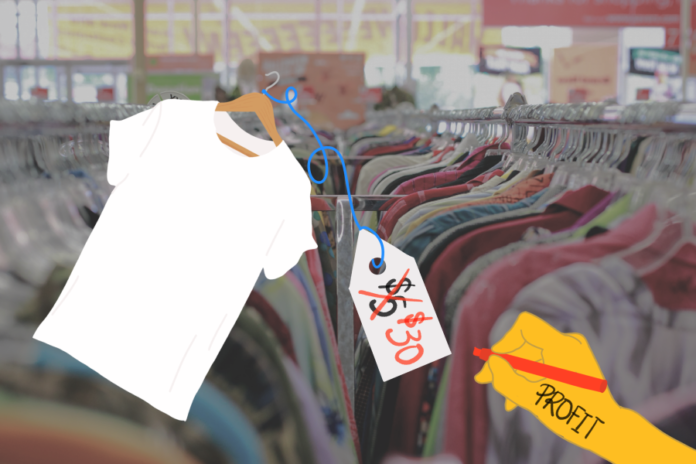 In recent years, thrifting clothes or buying secondhand items has become increasingly popular. The intention in doing so varies from person to person, whether it be out of necessity, environmental consciousness or wanting unique vintage pieces. Some people, however, do so to make a profit off of cheap items that they can upsell online. This act, due to its impact on lower income communities, has been considered gentrification.

According to Merriam Webster, the definition of gentrification is “a process in which a poor area (as of a city) experiences an influx of middle-class or wealthy people who renovate and rebuild homes and businesses and which often results in an increase in property values and the displacement of earlier, usually poorer residents.”

Specifically, this trend has been made infamous by the “Depop cult,” in which middle-class and wealthy individuals have a propensity for buying cheap or affordable items from thrift stores and reselling them on second-hand sites like Depop or Poshmark, which ends up making these items inaccessible to poorer communities.

Thrifting or buying second-hand has become a staple in younger generations, especially given Generation Z’s tighter budgets and increased focus on environmentalism.

The McKinsey Report found that much of Gen Z’s behavior is anchored around truth-seeking, individualism and believing companies must address environmental and social issues.

As Gen Z becomes more conscientious of their purchasing behaviors, it comes as little surprise how popular thrifting and buying secondhand or vintage items is among young people.

Forbes even said, “[As] the retail industry has slumped, dragged down by disappointing earnings and an unending trade war, resale is exploding.”

In addition, as more people stayed inside because of COVID-19, online secondhand purchasing is set to increase to 69% between 2019 and 2021 with the retail sector shrinking by 15%.

However, an increasing amount of middle-class and upper-class people have been going to local thrift stores and Goodwills in which they find hot-ticket items to buy at affordable prices and sell at much higher prices on Depop, Poshmark or other sites to earn a profit.

Previously, thrifting was associated with uncleanliness and often stigmatized with the status of being poor, as poorer individuals often had no other option but to thrift their clothing. Those who were more affluent and had an environmentally sustainable focus tended to splurge on much more expensive, high-quality and low environmental impact pieces.

Yet with the rise of thrifting, financially stable people can purchase low-impact and nice pieces of clothing from thrift stores at much lower prices.

Even as thrifting is touted as a sustainable and ethical way to shop for clothing, it has become popular among financially-able people working the system to make themselves profits and taking clothes from people who actually need to thrift for their clothes, not just as a hobby or for quick cash.

According to the 2020 Resale Report, resale is projected to overtake “traditional thrift and donation segment by 2024.”

Low-income individuals often rely on thrift stores for nicer, quality pieces especially to wear for job interviews, college interviews or clothing to wear in their workplace. However, with the increased amount of middle-class and upper-class individuals thrifting and upselling clothes, prices have increased in thrift stores and the selection of sizes offered have decreased, all of which negatively affect those who thrift out of necessity.

If you are someone who tends to over-shop at thrift stores and take advantage of the affordable prices, try to donate your own nice pieces of clothing you no longer use and purchase more from small, sustainable businesses.

We all want the best deal or craziest, cheap find, but it comes at the cost of taking things from other people who simply may not have the same privileges.