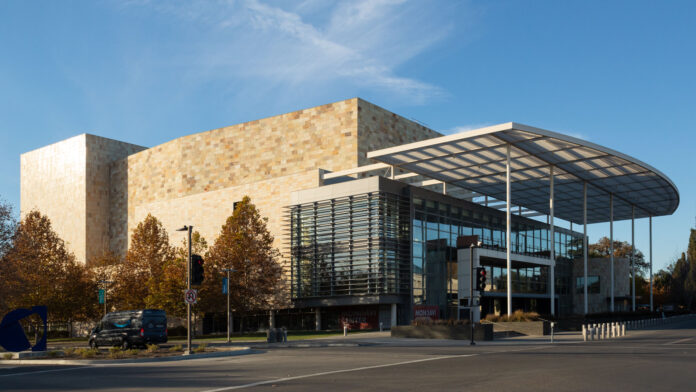 Aggies returning to campus in the fall can expect quarterly movie nights and many other events put on by the Mondavi Center in collaboration with the Entertainment Council (EC).

Although details of the films are still being finalized, each quarter’s film will be selected by the EC students and shown on the screen in Jackson Hall in the Mondavi Center, seating 1,800 people.

“Jackson Hall is a wonderful place to see a film, not least because of our fantastic new Meyer sound system,” said Jeremy Ganter, the associate executive director and the director of programming at the Mondavi Center.

Ganter has been with the Center since its opening and has held his current position for 15 years.

“Partnering on projects with UC Davis students is truly one of the best things about working at the Mondavi Center,” Ganter said. “We are always so happy to team up with EC and other student groups, as they are professional, creative and a pleasure to work with.”

In addition to quarterly films, the Mondavi Center is working with KDVS DJs to plan live events including potential silent discos.

As in previous seasons, the Mondavi Center is planning to co-present at least one live concert with EC in Winter or Spring Quarter of 2022.

According to the EC’s new unit director Ashley Hicks, a fourth-year communications major, the first movie will likely be shown early in Fall Quarter.

“We want to frame the initial movie screening as a welcome back to campus, so it is highly likely that it will be a free screening,” Hicks said. “We haven’t selected the movie yet, but we are hoping to do an indie film.”

Members of the council also have aspirations of continuing the tradition of hosting Sunset Fest during welcome week, which will likely be a full-capacity event if permitted.

“This event will be outdoors, and we are hoping to present it as a large and joyful live event after such a depressing year of isolation, a revival of sorts,” Hicks said.

Throughout the past year and despite the unpredictability, the EC was able to work with the Mondavi Center for their virtual Open Mic Nights, allowing students to be able to share their artistic and performative abilities.

These events came after the Entertainment Council’s longstanding tradition of hosting their own Open Mic Nights at the CoHo for many years now.

“We will continue to work alongside the Mondavi Center for the promotion of their Open Mic Nights, however, the Entertainment Council will likely reinstate our tradition as campus looks as though it will be fully functioning in the fall,” Hicks said.

The first Open Mic Night of the year is usually held near the second half of Fall Quarter. More information on the Entertainment Council’s Open Mic Nights will be released closer to the beginning of the school year.