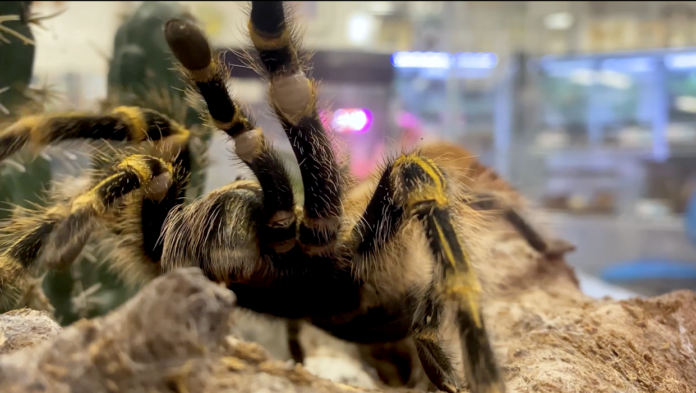 A team of 20 researchers are working tirelessly to transform protoxin-II, or ProTx-11—a peptide from the Peruvian green velvet tarantula’s venom—into a novel, non-addictive pain medication.

According to the University of Queensland’s Institute for Molecular Bioscience, peptides are chains of two or more amino acids, which are one of the building blocks of life.

This project is receiving $1,557,737 in funding from the National Institutes of Health’s Helping to End Addiction (NIH HEAL) Initiative. Not only is the NIH HEAL Initiative an effort to understand, manage and treat pain, but it is also a means to produce scientific solutions to improve treatment for opioid misuse and addiction, according to their website.

“The fact that opioids served as a primary medication for pain for many years and there was considerable fall out with understanding the risks associated with opioid therapy lends itself to search for safer and more effective medications, hence the push for medications that are unique, novel and have an improved risk profile,” said Chief of the Division of Pain Medicine at UC Davis Health Dr. David Copenhaver.

Copenhaver said that common side effects of opioid medications include but are not limited to constipation, nausea, vomiting, itching and perhaps the most grave of all: addiction.

According to the Centers for Disease Control and Prevention (CDC), as of 2016, 20.4% of U.S. adults have chronic pain. Additionally, it is estimated that in 2017, 1.7 million people in the U.S. suffered from substance-use disorders induced by prescribed opioid pain medications, according to the National Institute on Drug Abuse.

Both UC Davis School of Medicine Professor of Physiology and Membrane Biology Dr. Vladimir Yarov-Yarovoy and Professor of Pharmacology Dr. Heike Wulff are leading this project.

“I previously worked at the University of Washington in Seattle,” Yarov-Yarovoy said. “Which is where I got my initial passion to explore voltage-gated sodium channels that are important for pain signaling and also [using] computational, structural biology approaches […] for protein design, to be able to come up with alternatives to opioids.”

Voltage-gated sodium channels are responsible for making neurons fire, Wulff said via email. Neurons are defined to be “fundamental units of the brain and nervous systems,” according to the University of Queensland’s Brain Institute.

Researchers are focusing on Nav1.7, which genetic studies have identified as a specific type of voltage-gated sodium channel important in pain-signaling, Wulff said.

“People who have lost Nav1.7 function through spontaneous mutations feel no pain and can walk on hot coals or stick knives through their cheek,” Wulff said. “That is a very good reason to go after Nav1.7 for treating pain.”

UC Davis Professor of Entomology and Nematology Dr. Bruce Hammock also described Nav1.7 to be a “single important driver of pain in man.”

This is where protoxin-II comes into play. To bring this idea into fruition, researchers have turned to nature—particularly arthropods like cone snails, scorpions, snakes and spiders that produce “a cocktail of peptides” that target ion channels, proteins in neurons and muscles to paralyze prey for consumption.

“We started our design optimization efforts with […] peptides which nature designed for us,” Yarov-Yarovoy said. “Nature optimizes through millions of years of evolution. Now, here we come with our computational protein development approaches which can take natural peptides and optimize it to make it more potent, selective and stable compared to what nature designed.”

To engineer these peptides, scientists rely on computer and software technologies.

“So, what we can do is start with our best guess, which is the tarantula toxin,” Hammock said. “Then [we] have the computer design hundreds of thousands of peptides, and ask it [if those] peptides will bind and bind correctly. We make them. We run them against the sodium channel for humans in culture, and ask [if] they work to get better and more potent peptides. But, at the same time, we run them against other channels.”

In particular, Rosetta Software has been integral to this effort. Rosetta Software was originally developed in the lab of Yarov-Yarovoy’s former mentor, Dr. David Baker, at the University of Washington.

“Rosetta is a protein design program that allows us to literally design millions of versions of the protoxin peptide on the computer and then select the ‘best’ ones for actual synthesis and testing,” Wulff said.

Rosetta makes it possible for this process to occur in a very short period of time, Copenhaver said.

“The computer, and specialized programming, [can be used] to evaluate the structure of the tarantula toxin, and re-engineer it, such that it is a better fit to that sodium-channel it’s going to block,” Copenhaver said.

The results of this project are promising, Wulff said, and it’s all thanks to an interdisciplinary team.

“UC Davis is at the forefront of what is amazing science,” Copenhaver said. “The interesting collaborative ecosystem at UC Davis is unique, where many of us researchers and clinicians talk to each other. The only way you can really get amazing science […] is really having a team approach, and this has been evident through this project—led by Vladimir.”