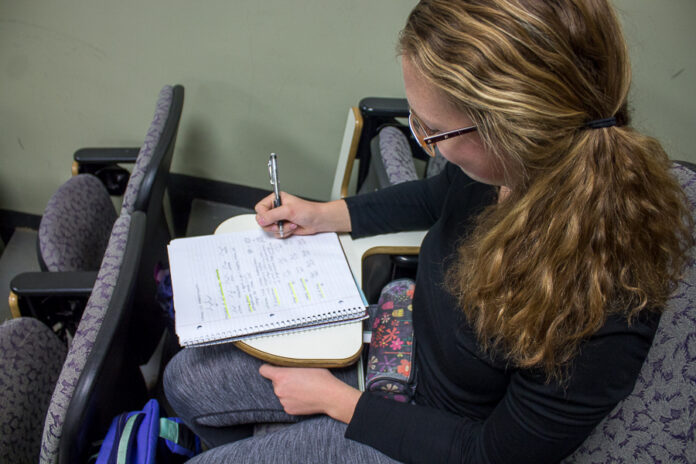 Is it B or C? B or C? The multiple-choice answers toggle back-and-forth in your mind as you glance up at the clock to see that there are only two minutes remaining. This exam is worth 60% of your grade, and you know you remember writing down the answer to this question in your notebook last week—but the test is strictly closed-note. Frustrated, you close your eyes and try to picture that page, willing the answer to appear in your mind, but it refuses, so you choose at random and give up, pressing ‘Submit’ and closing your laptop before you have to watch the Canvas confetti mock you.

The logistics of exams were a bit different this year, with virtual classes making cheating methods much more obtainable. As a result, many professors opted for open-note tests in order to level the access to information, a change that students had a variety of opinions on.

Fifth-year cognitive science major Bryce Joseph-Nelson stated he had almost exclusively closed-note tests before the pandemic, although students were sometimes allowed a single notecard to include some information on. In contrast, throughout the pandemic, almost all of his classes had open-note exams. However, he found this new pattern to have certain flaws.

“What I found a little bit frustrating was that a lot of my open-note tests were classes that were all memorization classes, and it felt as if I could just give up on actually learning the material at that point,” Joseph-Nelson said. “Like, I will look this up regardless of if I know it or not, just to triple-check, so I think it takes away a little bit of the pressure to learn it initially.”

Brandon Lu, a fourth-year economics major, also talked about his experience with testing this year.

“All of my tests were open note,” Lu said via Discord. “The main constraint of tests I had were time constraints, and differentiated tests to prevent cheating. For the most part, all of my classes took [an] ‘as long as it’s your own work, I don’t care how you get the answer’ approach to class.”

Lu expressed a somewhat different opinion than Joseph-Nelson regarding the change.

“I do feel less stressed out with open note tests, because I have a life line in the form of notes,” he said via Discord. “The feeling is akin to going into a duel armed with a sword, and having notes is like having armor. Whether you’re victorious is still up to you, but the odds are a little more in your favor.”

In order to contextualize memory as it is tied to learning, Charan Ranganath, a professor in the Department of Psychology, as well as the director of the Memory and Plasticity program, offered an explanation of short-term memory (STM) versus long-term memory (LTM).

“These terms mean different things to different people, but the way memory researchers use them is to say that LTM is your store of memories for events, and knowledge about the world, and STM is the ability to control and use information in LTM, along with information from the outside world, in order to accomplish a goal,” Ranganath said via email.

In addition to his work as a researcher, he described his experience with tests this year as a professor.

“The pandemic made me double down on using quizzes and testing as a learning and retention tool,” Ranganath said via email. “The major challenge with online instruction has been to balance learning with the significant issues that students faced during the pandemic. I had to be flexible for people who didn’t have regular internet access, so students had lots of time to complete the tests, and we couldn’t be around to monitor students to minimize cheating.”

He went on to say that because of a desire to give students who followed the rules equal opportunity to those who cheated, he made all exams and quizzes open-note.

“I feel that it really reduced the effectiveness of the tests as learning tools, but at the end of the day, it was more important to me to consider the students’ perspective,” Ranganath said via email. “Many students were understandably stressed to the point of near collapse, and giving them flexibility really made a difference in helping them stay afloat. But I would want things to be more challenging in the future because that dramatically increases how much students will learn.”

As UC Davis transitions back into in-person instruction in the fall, this unintentional pandemic experiment in widespread open-note exams may no longer be necessary. But if the goal is to encourage effective learning to the highest degree, is the long-term solution to stick to closed-note tests, or to try something new?

“I would like for open note tests to continue, and to further the idea, I would like any change that takes the pressure off high impact, short time duration assignments, which are mostly tests,” Lu said via Discord.

Joseph-Nelson offered a point in favor of the open-note format, acknowledging that with the widespread availability of the internet it’s a much more realistic approach. However, he also gave the opinion that test-taking in general may not be the best learning format.

However, Ranganath emphasized that many studies have been done highlighting the benefits of test-taking in the learning process.

“A lot of research suggests that tests can play a crucial role in helping you retain more information,” Ranganath said via email. “Tests shouldn’t be about evaluating students, they should be a learning tool! In general, the more you have to struggle to pull up the right information, the more effective that test is going to be to help you retain it. So, closed-note tests should be much, much better for retention. The catch is, if you get it wrong, you need feedback so that you learn the right answer. So, ideally you’d either see the right answer shortly after you make your response, or you’d get to consult your notes right after a question.”

Ranganath further explained how this might play out in a real classroom environment, recognizing nuance in how different methods might work best for different subject matters.

“Testing is known to be good for retaining specific pieces of information like, say, vocabulary words for your Spanish class,” Ranganath said via email. “It’s not clear that those kinds of tests will encourage you to think critically, and give you the kind of deep understanding so that helps you to form your own opinions on controversial issues. It’s also not clear, though, that projects or essays or homework do that either. In general, writing essays will probably make you better at writing essays, and doing oral presentations will make you better at oral presentations. (oral presentations probably also are fantastic ways to promote memory), and those are valuable skills even if you don’t gain a deeper understanding of the material.”

Joseph-Nelson concluded by expressing an underlying desire to learn the material in the most effective way possible, whatever that may be.

“I feel like the goal of a class should be to teach information in a meaningful way,” he said.