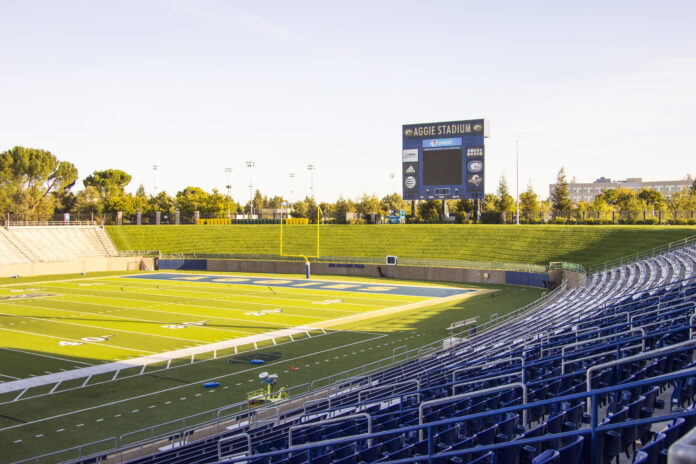 The highly ranked Aggies’ impressive start to the season shows their improvements from the spring, but what awaits them will not come easily

“We have great culture and leadership that I’m really proud of,” UC Davis Football head coach Dan Hawkins said of his team. “I love being around [this team]. They work hard and love each other. They’re great Aggies.”

Of course, UC Davis — like a lot of the Football Championship Subdivision (FCS) — did not suit up last fall to play their normal season and instead opted to play a shortened version in the spring along with a few other teams in the Big Sky Conference. In a total of five games, the Aggies went 3-2 with both losses coming to Eastern Washington and Weber State — teams that would go on to play in the FCS Playoffs. Nonetheless, the ability to play some kind of football in the spring instead of going almost two years without game action is something that the team coveted heading into this fall season.

“I think game action helps everybody,” said Hawkins. “Football is one of those funny sports where you practice a bunch but you don’t always get game action. There are many situations that arise that you need to learn from. I think for all of our guys because of the preparation aspect there’s this higher level of confidence about their own ethicacy.”

The spring games took the place of practice that you would see in a regular year. For a lot of younger players or players that had seen limited to no game action, the spring time was a perfect spot to gain more live action experience and practice their reps in game situations. One of those players who looked to take advantage of those live game reps was junior starting quarterback Hunter Rodrigues. Having battled out the quarterback competition in the spring following the departure of UC Davis all-time great quarterback Jake Maier (who is now lighting up the Canadian Football League), Rodrigues looks to get even better this fall.

“I think we really took advantage of the extra games we had in spring,” said Rodrigues. “Especially for me being the new quarterback, I was able to get some real game reps that will come in handy for this fall. I think a lot of young guys were able to play and step up in real gametime situations where we wouldn’t have had that in a regular spring.”

Overall, it served as an experience much needed for a lot of the players at UC Davis during uncertain times.

“I was just thankful that we got to play [in the spring],” said redshirt freshman quarterback Trent Tompkins. “It was really cool because we never knew [during COVID-19] what was going to happen. It just felt really good to get the confirmation to go out there and be able to play someone other than ourselves.”

Right off the bat, the Aggies were tested at the start of the fall season. Traveling to Tulsa, Oklahoma, UC Davis took on the FBS Tulsa Golden Hurricanes, who were coming off one of their better years last season. In front of over 15,000 fans in attendance, the Aggies looked to become the first FCS team to knock off an FBS team in 2021. Entering the game as a 23.5 point underdog, many did not see UC Davis as a threat to Tulsa. However, that changed quickly after the game began on Sept. 2, as the Aggies jumped out to a 7-0 lead on their first offensive drive culminating in a 12 yard touchdown reception by tight end McCallan Castles.

The UC Davis defense’s mix of veteran leadership and athletic personnel stood strong against the Golden Hurricanes, stifling them in the first half as they entered deadlocked at 10. In the third quarter, however, it seemed as though Tulsa would prove to be too much for UC Davis, enforcing their will in the running game and passing game. But, the UC Davis defense and their timely stops kept the game at 17-16 with 10:58 left in the game.

As the Golden Hurricanes began driving in hopes of extending their lead, senior linebacker Cole Hansen’s clutch interception and return gave the Aggies the ball back deep in Tulsa territory with a chance to take the lead. After failing to score a touchdown, they opted for another field goal and junior kicker Isaiah Gomez saw his fourth of the night go through the uprights to give his team a 19-17 lead.

A tense crowd in Tulsa, Oklahoma watched as their Golden Hurricanes now had 7:29 left to retake the lead. They drove down the field and got it down to the UC Davis 12 yard line. As they were knocking on the door of the endzone, a major hit by sophomore defensive back Chris Venable jarred the ball loose and through the back of the endzone, unbelievably giving the Aggies the ball back. A mix of running and quick passes was all UC Davis needed to never give the ball back again, and kneel for the victory. The thrilling win by UC Davis marked just their third win against an FBS opponent in school history after previously beating Stanford and San Jose State.

“It was really a case of our coaches, players and everyone on our staff buying into the little things,” Hawkins said following the win. “It was really about us and trying to play clean and be the best version of ourselves. That’s really what we focused on. There were a lot of meaningful lessons that came out of it and that to me is the most gratifying.”

Their next opponent came from in-state, and it was the University of San Diego Toreros. Having last played them in 2019 and riding a five game winning streak against the Toreros, the Aggies looked to continue their streak. Right from the start, UC Davis proved to be too much for San Diego as they jumped out to a 22-0 lead at halftime. With Rodrigues cooking at the quarterback position and the defense once again showing no cracks, the Aggies were rolling.

Rodrigues has used the game experience he garnered from the spring to his advantage, lighting up the box score in both games with 311 and 322 yards passing respectively and five total touchdowns in the first two games. With contributions from seniors Jared Harrell, Khris Vaughn and the entire offensive staff, Rodrigues has settled in as the starter. In their home opener, the Aggies will host the new member of the Western Athletic Conference Dixie State on Sept. 18. That will be their final non conference game before they begin the brutal stretch of Big Sky Conference games. Entering the season, they were ranked sixth in both the Big Sky Media and Coaches Polls.

Their first conference game will be in Ogden, Utah against the Weber State Wildcats on Sept. 25 — a team they are all too familiar with. In the spring, the Wildcats defeated UC Davis 18-13 and also beat them in fall of 2019. One of the premier teams in the FCS, this game could mean much more down the road depending on the outcome. The following week on Oct. 2, they will host Idaho, another team they faced in the spring and also visit Pocatello, Idaho to play the Idaho State Bengals, who they edged out in the final seconds of their spring game in March of this year.

As they make their return home on Oct. 16, UC Davis will host Northern Colorado — a team they have beat their last two times they faced them — in their Homecoming Game. Their last four conference games will be split between home and away, but the home games may turn out to be crucial.

On Oct. 23 and Nov. 6, they will visit both Cal Poly and Northern Arizona as they gear up for what could be the most important games of the season. Depending on how the chips fall, their last two games — hosting Eastern Washington (Nov. 13) and Causeway Classic rival Sacramento State (Nov. 20) — could turn out to be big indicators of the season they want to have. Still, having both games at UC Davis Health Stadium could be factors that could change these close matchups.

Overall, the last two years have been a rollercoaster for UC Davis football and all of the world as well. Although the team still must wear masks and be careful outside of practice, the feeling this fall is more of what they are used to. The uncertainty of what awaited the team was something that could be hard to grasp for most teams, but the veteran and upperclassmen leadership within this ball club plus the return of the Aggie faithful could be what ends up being the difference this ongoing fall season as the Aggies hope to get back to the FCS Playoffs.

“Our leaders have been here for a while and going through that fall and spring not knowing what was going to happen, they helped us focus on the grind of everyday and not worry about what the future held,” said Rodrigues. “The leaders on the team did a good job of that and got us prepared for whatever came.”