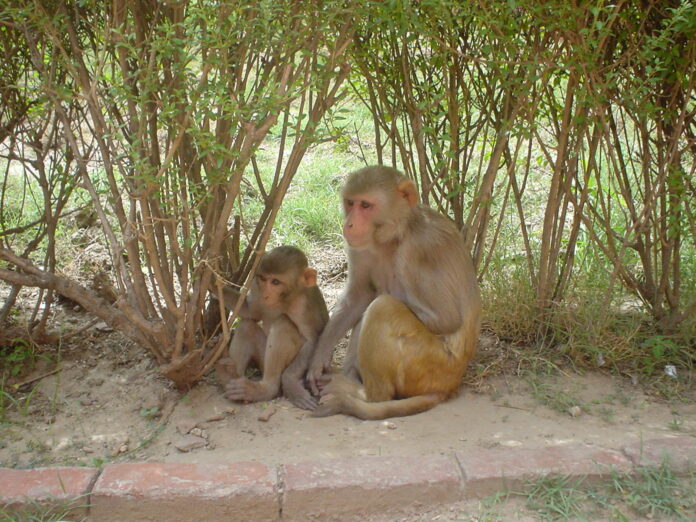 The California National Primate Research Center (CNPRC) at UC Davis conducted a “unique case-control” study investigating birth outcomes in Rhesus macaques. This species’ breeding period was affected by the Camp Fire, according to a research paper published  in the journal of Reproductive Toxicology.

The U.S. Census Bureau has deemed the Camp Fire, originating in Butte County in Northern California, “the deadliest and most destructive wildfire in California History,” according to their website.

“My colleagues and I took advantage of two events that coincided,” Dr. Bill Lasley, professor emeritus of the Department of Population Health and Reproduction at UC Davis School of Veterinary Medicine said via email. “One event was the natural breeding season of the outdoor [Rhesus] macaque colony and the other event was the [Camp Fire wildfire].”

Smoke from the Camp Fire yielded poor air quality, affecting 500 mature female Rhesus macaques, or non-human primates, enclosed in an outdoor field at the CNPRC. This facility is located approximately 100 miles away from the origin of the fire, according to the paper.

“These two temporal events coupled with the unique properties of the nonhuman primate for modeling human reproduction was a coincidence that needed to be documented,” Lasley said.

Lasley said that this research was “a true ‘experiment of nature.’”

Wildfires produce organic and inorganic carbonaceous particulate matter, which are air pollutants, according to the paper.

“Many previous studies have shown that air pollution, including wildfires, threaten human pregnancies,” Lasley said. “However, we do not always know the mechanism of toxic effect or when, in gestation, this adverse effect takes place.”

The objective of the study was to observe how fertility, timing of birth and pregnancy loss was affected in Rhesus macaques following the dissemination of wildfire smoke.

According to the paper, pregnancy loss is defined to be “no live birth after confirmation of pregnancy or delivery of products of conception.”

Of the 500 mature females that were observed, 66 females were randomly selected to be a part of the 2018-2019 Camp Fire-Exposed Cohort, according to the paper.

“Given the acceleration of the climate crisis and the increasing threat of wildfires, this study underscores the need to address climate change and the potential need for pregnant women to take precautions in areas exposed to [wildfire smoke],” staff research associate at the Lasley Lab at the Center for Health and the Environment Nancy Gee said via email.

Gee said the results of the study showed a reduction in live births in the non-human primate model, and that these results can be applicable to humans.

“The [non-human primate] is the most applicable model for reproductive studies due to the similarities in reproductive pathways including pregnancy,” Gee said. “The results serve to inform and drive further research into the effect of [wildfire smoke] in pregnancy. This is especially important in the very early critical windows of development in early pregnancy when many women are not yet aware that they may be pregnant.”

Lasley said that he hopes this research will inform the public.

“Hopefully it will serve to warn the public, especially pregnant women, about the potential danger of unneeded exposures to severe wildfire smoke,” Lasley said.

Many departments came together to collaborate on this project.

“The study is an excellent example of harnessing the power of multiple resources available across the UC Davis campus including the CNPRC, School of Medicine and the Center for Health and the Environment at the John Muir Institute of the Environment,” Gee said.