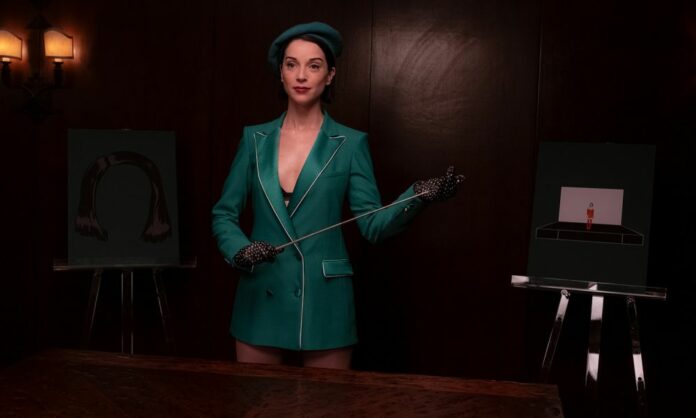 St. Vincent and Carrie Brownstein’s new mockumentary shows us the greatness that follows from creatives coming together and combining their strengths into something new

The mockumentary is a sacred genre, and while “The Nowhere Inn” does honor the art, it definitely blurs some lines with its avant-garde absurdity (that is somehow not pretentious). The film is co-written by and starring Annie Clark (St. Vincent) and her real-life friend Carrie Brownstein, who many might recognize from the TV show “Portlandia” or her band Slater-Kinney. This mind-bending, meta and visually pleasing movie is marketed primarily as a mockumentary in which things go horribly awry when two friends try documenting life on the road with St. Vincent, and while it definitely is that, these creative artists deserve a little bit more credit than that. It’s the kind of absurdity that encompasses the entire movie—as in you never know who’s acting or which version of the story is being seen at any given moment—that takes the weight of figuring out the “deeper meaning” or finding the clues right off your shoulders.

Clark is almost as talented an actor as she is a musician, which (as is dissected in the film) is not surprising considering how dedicated she is to her ‘persona’ as St. Vincent during live performances, as well as music videos, and her success in creating entirely new eras and aesthetics with each album. Brownstein brings just as much to the performance, being the only one throughout the entire story to question what is really even going on. She goes from being the slightly inconsiderate director/friend desperate for a “more interesting” story to what was essentially a victim of St. Vincent’s metaphysical madness.

Clark and Brownstein were able to create an incredibly creative and innovative take on what can often become a fairly repetitive genre of movies. The two main facets that made this absurd film a success were the fact that they did not take this artform too seriously — evidenced by it being a mockumentary — and the fact that neither of them completely disregarded one medium for the sake of creating another, in regards to their own artistic backgrounds as a musician and comedian.

For a movie (or any art form for that matter) to be good, it does not need to be deep or function as a reflection of the state of the world. This is often a danger when creatives come together to create something at such a great scale, but “The Nowhere Inn” avoids the minefield of moralistic or overly-existential tropes by adding just the right amount of self-aware comedy and absurdity to let viewers know not to take it all too seriously. This is not to say the movie has no actual storyline or message, because it certainly does have something to say about the severed identity of the performer, friendship and just generally the dangers of fame, but it does not present these themes as if they were revolutionarily insightful ideas.

Clark brought with her the signature “art-rock” aesthetic as well as her amazing live vocals, and Brownstein provided the signature witty and off-the-wall comedy style you might recall from her characters in “Portlandia.” “The Nowhere Inn” functions as a culmination of these two women’s varied strengths and presents the potential of what could be made when creatives work together and are not afraid to combine mediums to make something new. Essentially, this movie has the creativity behind it to make it genuinely fun to watch; Clark, Brownstein and the rest of the great cast felt like they were all being themselves (always a good sign for something that is supposed to resemble a documentary).

I’d also like to give one final shout-out to Dakota Johnson, for her role as Dakota Johnson in the film—she really did a great job however brief her time on screen.