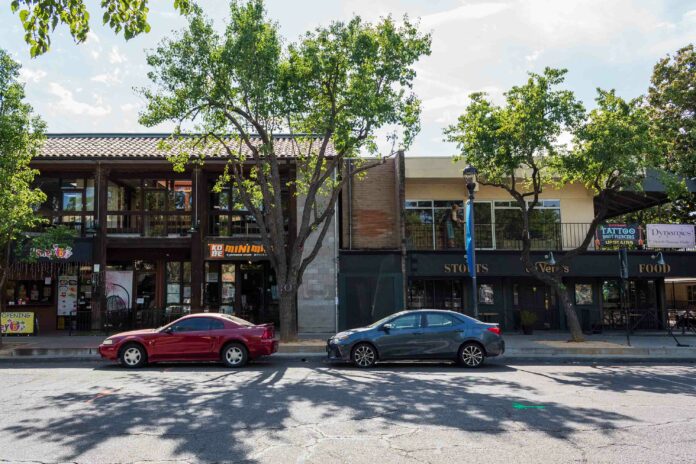 Businesses are optimistic about potential expansions

As school enters full swing, UC Davis students have been descending upon the city of Davis in droves, often going to places in downtown to satiate their appetites. Many students and parents go out for dinner after moving, according to My Burma manager Anne Guidici.

“We’ve had an influx of students returning to campus,” Guidici said. “A lot of our bigger groups in the past couple of weeks have been parents and students going out to dinner after moving in, or just getting to know the area before heading back to their respective homes.”

Handheld Davis co-owner Michael Sutton expressed a similar sentiment, stating that foot traffic has gone up for his food truck.

“I’m definitely seeing a lot more foot traffic,” Sutton said.  “The majority of our business involves foot traffic. We did just start about three weeks ago, so it’s hard to compare, as we have only really had one week to compare with.”

Handheld has also benefited from having some local connections, according to co-owner Stephanie Maroney.

“The majority of our customers are local Davisites,” Maroney said.  “Michael has worked in food service in Davis for the last 10 years, so a lot of our first customers were people who have supported us in the past and who know us and who have found out about our business from the Davis Enterprise.”

My Burma, on the other hand, has been open throughout most of the pandemic, Guidici explained.

“We had to make a lot of adjustments for ever changing regulations,” Guidici said. “We stayed as solely takeout for a while, and when the restrictions lifted, we had minimal outdoor dining. But with everything going on with the Delta virus, it’s kind of wishy washy on what we’re supposed to do. Currently we are open as dine-in and dine-out, and we continue to offer take-out, DoorDash and UberEats. We’re just making efforts to reach as many customers as we can.”

Guidici emphasized the role of friendly service in My Burma’s success, despite the lack of dine-in options throughout the pandemic.

“We strive for the friendliest service possible,” Guidici said. “They know all the stations, so if they need to food run, if they need to bartend, they know how to do it. Knowing our cuisine, knowing our full menu, it’s just the staff, the service, the food.”

The recent good business has inspired My Burma to consider expanding to new locations, according to Guidici.

“We are hoping that we can open more locations, not necessarily in Davis, but in Sacramento too, to serve that community,” Guidici said. “A spot in downtown is ideal because it’s closest to the college in Sacramento.”

Handheld is a small family business, so it has limited hours. Even so, Maroney said that they eventually hope to expand the business’ hours and do more events downtown.

“We’re open from Fridays to Saturdays from 11 a.m. to 7 p.m., and we also work with the Davis craft fair,” Maroney said. “We have only done Fridays and Saturdays because it is a family business run only by me and Michael and our kids, so Fridays and Saturdays are the only days that work for us right now.  We anticipate opening more hours in the future and also doing more special events around town; we are excited to work with other small businesses and support different causes in our community and try to just be a good neighbor in downtown Davis.”

The decision to open My Burma amid the pandemic may have seemed to be a bold move, and Guidici speculated that the owner was very confident about the quality of his cuisine.

“I have talked to the owner and he was pretty confident that his cuisine would be popular here,” Guidici said. “Davis is a very diverse place with a lot of very open people who are willing to try different things.”