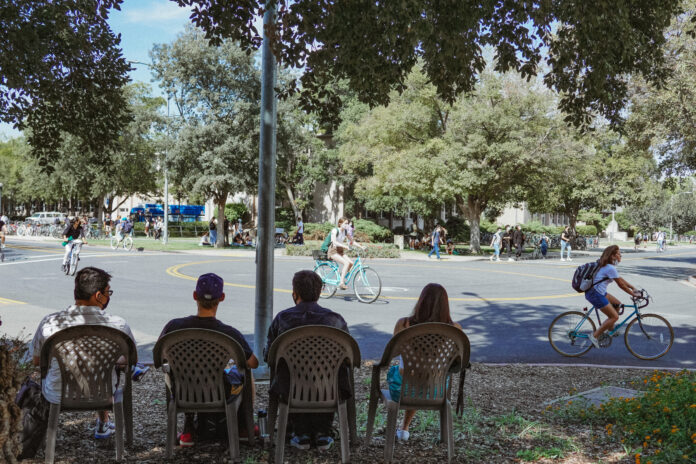 As a record-breaking amount of students return to campus, new riders learn the ropes through trial and error

With an unprecedented number of new cyclists navigating the UC Davis campus for the first time, lack of biking knowledge and familiarity with the road conditions have caused an uptick in accidents and long lines for repairs at the Bike Barn.

Jeffrey Bruchez, the bicycle program coordinator for UC Davis Transportation Services (TAPS), said that one of the biggest challenges this year is having the largest first-year class in UC Davis history. This is coupled with a significant increase in the number of new bikers, as second-year students, fourth-year transfer students and second-year graduate students were almost entirely absent on campus last year due to the pandemic.

“There are over two-thirds of the university that [are] new to the environment,” Bruchez said. “We already have almost a third of the university riding bikes, [so] that’s a stunningly large number of new or novice cyclists.”

Joseph Farrow, the UC Davis police chief, said that there tend to be more accidents at the beginning of quarters, especially during the first week.

“A lot of people are coming to campus, I’m not saying that have never ridden a bike before but haven’t ridden a bike as a main form of transportation,” Farrow said.

“The last time I rode a bike I was in grade school, maybe even before the fifth grade,” Palicte said. “And then last week, I got a bike.”

Richard Pham, a third-year political science major, said he was in an accident on Oct. 4 while riding an electric scooter when a cyclist circle near the ARC entered a bike circle from the left instead of the right side.

Farrow said that they have been called out to six or seven accidents since the beginning of fall quarter, but only in five instances, the injured parties were there when the police arrived.

“The most serious one was the one that was last week, where it was actually a car and bike that sideswiped each other,” Farrow said. “The bicyclist hit the ground pretty hard, and I think there was a fracture.”

For the most part, minor accidents do not involve the police department unless a report needs to be taken for insurance purposes.

“‘Minor can just be you hit a curb, you fall, you have a little abrasion,” Farrow said. “They don’t even call us — we don’t even go out for things like that because they don’t call.”

Pham said, in his case, he decided to leave the police out of it and instead went home to tend to his injuries.

“[The bike rider] was also hurt. We both wore helmets, but he still got some scrapes,” Pham said. “So I just forgave him and we had to move on because [the leg injury] was bleeding so I had to go straight home.”

A challenge for inexperienced bike riders is the sheer amount of cyclists on the road at the same time.

“I went out to practice biking, and it was really nice,” Palicte said. “There was no one except a few families. But my first go through the bike circle during normal class time was […] pretty stressful.”

The most important thing for riders to remember is to not be in a hurry, Bruchez said.

TAPS offers a canvas course entitled “cycling savvy” that goes over defensive cycling skills as well as a training session they conduct in partnership with Student Health and Counseling Services, “Helmet Hair Don’t Care,” which offers a free bike helmet in exchange for the education.

“In order to get a free helmet, you have to go through this five-to-10-minute bike education thing,” Bruchez said. “It’s about three different pages where we go over rules of the road, why we want you to ride on the right, and ‘Who do we yield to? We yield to pedestrians,’ — things like that.”

The police department also offers free bike lights during their community events for students to maintain visibility, which is required by law at night.

Kahui Lim, a UC Davis doctorate alumnus in environmental engineering and former Bike Barn service manager, said when he was working at the Bike Barn, he noticed an influx of students coming in the first week of the fall quarter.

“It’s a regular occurrence, not necessarily because of accidents,” Lim said. “A lot of students are trying to get their bikes in working order or they find that they have a leaky tube.”

For example, Palicte said that she has already noticed something off with her bike.

“I bought a really cheap bike off of Target because I didn’t really know where to start,” Palicte said. “I’m pretty sure the back wheel is busted — it keeps clicking.”

UC Davis touts itself as a bicycling university, Bruchez said.

But in order to maintain safety while riding around campus, Farrow stated that it’s important to recognize one thing about bicycles.

“They defy gravity every time you ride them,” Farrow said. “Gravity is always trying to pull you down off those two wheels.”