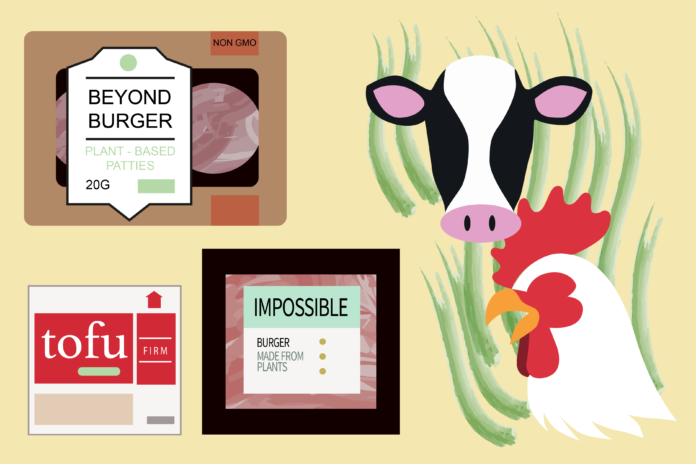 Impossible burgers, steak, almond milk, 2% milk — which of these foods contribute to a sustainable diet? Sustainability discussions breed controversy, often pitting animal products and meat alternatives against each other. However, this dichotomous framing may impede critical research, as innovators across both sectors work to reduce the environmental impact of food production.

A recent review by UC Davis’ Department of Animal Science calls for a broader understanding of eco-friendly diets in order to also consider its implications for global food systems, adequate nutrition and food security.

“It’s not a simple topic,” Dr. Alison Van Eenennaam, the cooperative extension specialist and head of the Animal Genomics and Biotechnology Lab, said. “There are many nuances of sustainability and it’s getting sold in a way that doesn’t appreciate the tradeoffs.”

“We have such an abundance of choices that we’re probably going to be nutritionally alright, almost irrespective of whether we choose to be, you know, vegetarian or flexitarian, or omnivore or carnivore,” Van Eenennaam said. “We’re probably going to get enough to be fine from an insufficiency perspective—where we run into trouble is overconsumption.”

“Because they can’t afford animal source food products, they’re malnourished because they’re lacking essential nutrients,” Van Eenennaam said. “So even if you don’t want to eat animals, there is a role for animals in sustainability discussions.”

In order to evaluate the environmental impacts of animal-sourced foods and meat alternatives, Van Eenennaam worked with Samantha Werth, a Idaho science and technology policy fellow, in reviewing a series of Life Cycle Assessments (LCAs). LCA’s serve as a methodology for assessing the environmental impacts associated with all stages of a product’s life, from the development of a resource to it’s disposal or recycling.

Their review of these models emphasized the importance of accurate metric choices for each assessment. As exemplified in the article, in LCAs, greenhouse gases are typically expressed as their global warming potential (GWP) over a 100-year timeline. However, greenhouse gases vary in atmospheric lifetime, especially those produced by ruminant production systems who digest their food more than once, leading to the production of methane. The atmospheric lifetime of this short-lived climate pollution extends to only 12 years.

To accurately represent short-lived climate pollution in LCAs, researchers at the University of Oxford have introduced a new expression of the global warming potential metric: GWP*. When LCAs are conducted for ruminant systems without taking into consideration the short-lived climate pollution of animal-sourced foods, the products yield over 10.3 million metric tons of carbon dioxide.

However, when assessed with GWP*, products assist in the removal of 2.85 metric tons of carbon dioxide — a vast difference.

“Seeing livestock production in terms of the newer characterization method of GWP* and what that actually means in the grand scheme of our impact of livestock on environmental impacts,” Werth said. “It really puts things in a totally different perspective.”

Although LCAs might reveal animal-sourced foods to be more environmentally friendly than commonly thought, there are still measures to be taken to reduce emissions and create more productive systems in striving toward climate stabilization.

Meat alternatives will also play a critical role in sustainability discussions; as the global population increases, so does the demand for protein and animal-sourced foods, according to a recent estimate by the United Nations. Meat alternatives (such as the Impossible Burger) and cultured meat (meat produced through cellular agriculture) will aid in meeting this demand without having to mitigate environmental effects as much as livestock production.

“Synthetic biology and cultured nutrients getting added to plant foods has the potential to make it a more complete food source,” Van Eenennaam said. “I think there’s a lot of opportunity for synthetic biology to augment and supplement plants and to improve the nutritional composition.”

“A cow today in the U.S. produces about four times the amount of milk she did in the 1950s,” Van Eenennaam said. “And as a result, a glass of milk is a third of the environmental footprint it was of the 1950s.”

Innovations in livestock production have also decreased the environmental footprint of beef and chicken production.

“We’re very good at what we do in terms of producing beef in the U.S.,” Werth said. “Over the last 50 years, we’ve kept the herd size the same, but increased production by 67%.”

Furthermore, comfort is not compromised by a quest for efficiency; advancements are made with careful consideration for the animals within these systems.

“In order for these animals to be as productive as they are, we have to put a lot of time and care and love into how we’re producing them,” Werth said. “If an animal is being mistreated, if it doesn’t have the optimal nutrition and optimal feeds going into its diet, it’s not going to be as productive as it can be.”

By balancing ethical treatment with sustainability goals, Werth believes it can help feed a planet in a sustainable manner. When it comes to cattle production, Werth suggests we shift our framework from “How do we keep making these animals more efficient?” to “How do we actually minimize the emissions they’re producing?”

In applying this structure to global food systems, this will look like asking questions such as: “Where are these animals at? What’s the land like? What are the resources available to these ranchers and farmers whose livelihoods depend on cattle? Then, what can we use in that space to help these animals become the most efficient they can be?” Werth said. “If you can produce more with less, then you don’t need as many animals and you’re helping to improve sustainability in that way.”

When we acknowledge innovations in both animal agriculture and alternative meats as allies to sustainable efforts and health initiatives, science can more effectively guide policy to meet our goals, as advised by research conducted by the Public Health Agency of Canada. Proposed policy that sounds good on paper isn’t always beneficial in the long run, and data-driven science assists in identifying blind spots.

“It sounds really nice [for policymakers] to think, ‘Yeah, we’re using less pesticides and less fertilizers’, but then our food costs go up 50%. In these decisions, an entire part of the population now no longer has access to these higher quality health foods,” Werth said. “And that’s a choice that we have some power over in the way that we communicate the science behind it.”

Editor’s note: A previous version of this article mentioned Van Eenennaam and Samantha Werth conducted a series of Life Cycle Assessments rather than reviewed them. Beef production has increased by 67%, not 40%, in the last 50 years. In addition, a previous version of the article said that plant-based alternatives are nutritionally complete, which is not true. The article has been updated to correct these errors.