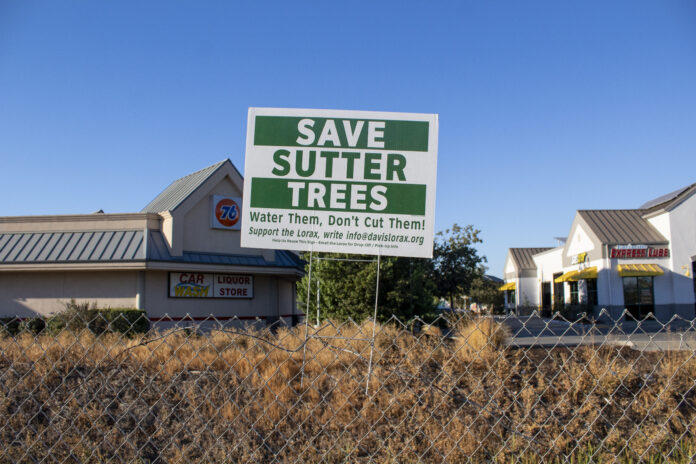 Two appeals were discussed in the meeting

In a meeting held on Sept. 21, the City of Davis’ City Council discussed the 2000 Sutter Place Phase 2 Solar Project.

According to the 93-page staff report, the project was first approved on July 14 by the Planning Commission at Sutter Davis Hospital Campus and consists of “the installation of 11 solar carport/canopies over an existing paved parking lot and the removal of approximately 63 trees.” Although the project was approved, conditions of approval were also added, according to the staff report.

“On July 14, 2021, the Planning Commission approved the Phase 2 solar project at Sutter Davis Hospital Campus by a vote of 6-1, based on the findings and staff recommended conditions of approval,” the staff report reads. “However, the Commission added and modified conditions of approval to address its concerns about having vegetation within the planter strips and to require the applicant to transplant all existing Phase 2 mature trees identified to be in good condition (43 trees).”

Ashley Feeney, the assistant city manager for the City of Davis, explained during the meeting that two appeals have been filed.

“One of them is planting of additional shrubs and ground cover in the planter strips to ensure a fully vegetated planter,” Feeney said. “These are the existing planter strips that currently there’s trees that occupy those planter strips. They’re proposing to put in the photovoltaic rays, and then Planning Commission added this condition to vegetate those remaining planters in those areas.”

Feeney described the second condition that Sutter is appealing, which is the “transplanting of 43 mature trees onsite.” Subsequently, another appeal was filed by Alan Hirsch on July 26. According to the presentation, this was “the appeal of the Planning Commission decision to approve the Phase 2 project.”

“So it’s really an appeal of the entirety of the Phase 2 project, but also part of his appeal was an appeal of the Tree Modification Permit that was issued as part of the permitting for the approved Phase 1 project,” Feeney said during the meeting.

The staff report which was referred to in the meeting can be found in the agenda for the Sept. 21 meeting, alongside a copy of the presentation and other relevant documents. The Notice of Public Hearing for the meeting can also be found online, which explains the appeals that were discussed during the meeting.

The document explains that “the City has received two appeal applications regarding the July 14, 2021, Planning Commission approval of the Phase 2 Solar project at Sutter Davis Hospital Campus.”

Additionally, the second appeal was filed by Alan Hirsch, et. al, requesting that a few approvals be overturned, the details of which can be found in the Notice of Public Hearing. Ultimately, the City Council voted for Sutter Health to be able to remove the trees and install the solar carports, an article from KCRA reported.