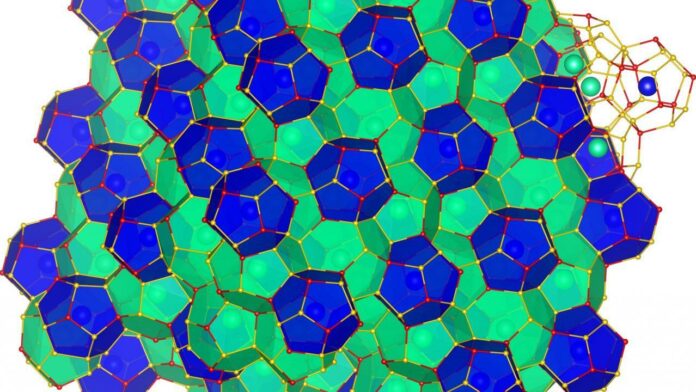 Researchers at UC Davis and Iowa State University recently received a $700,000 grant from the U.S. Department of Energy (DOE) to discover and synthesize new clathrates, according to a recent press release. Clathrates are a chemical crystal structure that are known for their cage-like frame. The word ‘clathrate’ comes from the latin word Clathratus meaning ‘with bars,’ or ‘latticed. The researchers aim to explore potential applications of the materials, from better cooling for computers and cars to renewable energy options, as well as simply the base rules that define clathrate structures and properties.

Davide Donadio, an associate professor in the Department of Chemistry at UC Davis and the principal investigator for the project, explained that clathrate crystals consist of two parts: a frame that forms the titular “cages,” and the “guest atoms” that reside within the cages.

The physical properties of the clathrates change depending on the atoms forming the cage structure and the guest atoms trapped within. They can exist naturally, as in water and methane, as well as through synthesis in labs.

“You have so many ways of designing these materials, from a chemical standpoint, to achieve different properties — the chemical space is pretty wide,” Donadio said. “You have to satisfy some chemical rules, you need to form covalent bonds, but there are a lot of possible realizations.”

Specifically, Donadio and Kirill Kovnir, an associate professor of chemistry at Iowa State University partnering with Donadio, will seek to synthesize clathrates built from type III-V and II-VI atoms, with alkaline-earth metal atoms in the cages. But according to Donadio, there’s lots of theoretical modeling that goes on before any clathrates are synthesized.

“My work is theoretical, and I think one of the strengths of this proposal is that my theoretical work is intertwined with experimental work by Kirill,” Donadio said. “So my group will set up a model to predict the stability of clathrates with a given chemical composition.”

Donadio elaborated, saying that they do this by modeling the interaction among the atoms a material is composed of in different ways depending on the properties they want to look at — things like if it’s a semiconductor, the stability it’ll have, the vibrations of the particles and so on. However, doing these calculations can be very time consuming and computationally expensive.

“Doing calculations to determine properties […] a simple material goes pretty fast, I can do it on my laptop,” Donadio said. “But when I start to simulate a more complex material like these clathrates, some of these have like 260 atoms, or a multiple of those, so machine learning is a way of speeding up complex calculations.”

According to Donadio, machine learning allows them to train a machine based on known calculations, to be able to predict the properties of new structures without going through all of the electronic structure calculations.

Zekun Chen, a third-year Ph.D. student in the chemistry department at UC Davis working for Donadio, and a machine learning expert, discussed the role machine learning has played in clathrate research.

“Machine learning is keen at inferring structure-property relations from the trend of known data,” Chen said via email. “Our goal is to build predictive machine learning models based on available data of thousands of known compounds. [We can then] apply them to make predictions on renovative clathrate materials.”

Chen went on to explain the value of these predictions.

“These predictions are important because they can help us understand the fundamental principles of this group of clathrates,” Chen said via email. “Meanwhile, once sufficiently developed, this machine learning workflow can be extendable to study other classes of materials. Thus, machine learning can be helpful in material discovery in general.”

Donadio said that synthetic clathrates have been around for a while, but in a limited way, with most of the frames being made out of silicone, carbon, germanium and tin — all in the same column of the periodic table. But Kirill’s experimental efforts allowed him to synthesize clathrates with different elements, opening up the path to future research with a more diverse array of clathrates.

These new clathrates, if successfully synthesized, have many possible future applications, including in the field of energy through thermoelectric energy conversion.

According to the press release about the grant, thermoelectric materials can both “offer a fix for overheating” by transferring excess heat away from electronics and convert heat into electricity.

Susan Kauzlarich, a distinguished professor in the Department of Chemistry at UC Davis who does experimental research centered around new thermoelectric materials, said that this works through what’s called “temperature gradients.”

“You have temperature gradients everywhere — the difference in temperature between the air and your skin, that’s a gradient,” Kauzlarich said. “You can use a temperature gradient to create electricity because the carriers, which are electrons, carry heat, and move from a ‘hot side’ to a ‘cold side,’ and that’s how electrical current is generated.”

She went on to explain how clathrates are involved in the conversation and research around thermoelectrics.

Donadio went on to say that apart from thermoelectrics, there are also applications in batteries to make solid-state electrolytes to replace current plastics, for the sake of safety and efficiency. However, he said that application is not their project’s main goal — rather, they’re simply seeking to discover what clathrates can be synthesized, and what chemical rules define their stability and properties.

“We want to explore the chemical space to find new clathrates with possibly unprecedented properties,” Donadio said. “[…] If we find something with very low thermal conductivity and decent electronic properties, then it could be a good candidate for thermoelectrics, but we’re not focusing on that.”

Donadio and Kovnir’s research is inherently interdisciplinary, and Donadio described how that has been essential to the project.

“The research we do in my group is really across the boundary of chemistry, physics, and materials science,” Donadio said. “We are using methods that have been developed by physicists, and we are applying them to a chemical problem. On top of that, we have all this new artificial intelligence that really plays an important role in this project.”

Kauzlarich emphasized the support the chemistry department has for Donadio’s research and the potential of new discoveries.

“We’re all very excited […], and I know that he’ll make great progress looking at these, because again, there’s so many different combinations that you can have, and finding the best ones is like finding a needle in the haystack,” Kauzlarich said. “So I’m sure that his contributions to the area will help experimentalists everywhere.”