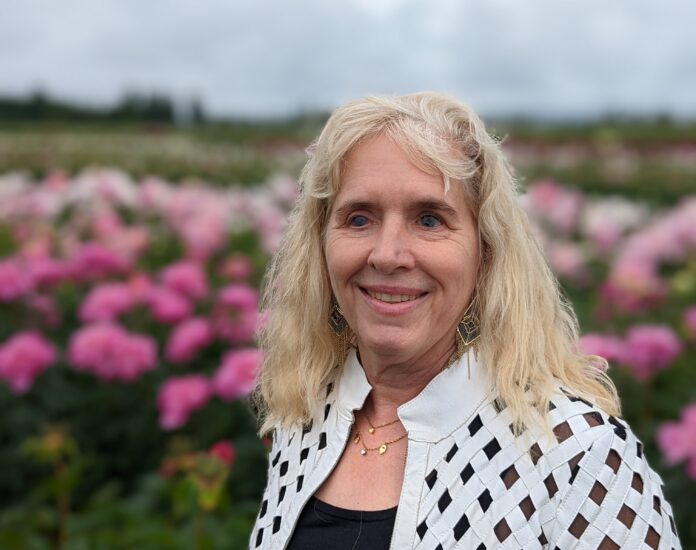 An ode to the time when she could see bright lights and high contrasts, Gena Harper’s living room is scattered with Christmas lights and checkerboard patterns. Next to her dogs’ leashes hangs a bronze medal and a picture of her at 22 years old.

Harper won the medal in the National Handicapped Ski Championship in her 20s. In her 40s, she competed for the U.S. National Para-cycling Team. She did that as she worked toward being a senior vice president of investments at Morgan Stanley and a mother of two.

Harper’s daughter, Sarena Solodoff, 22, refers to her mother as “a powerhouse, in every sense of the word.”

Harper, now 59, was born with congenital glaucoma, a disease that damages the optic nerves and causes impaired vision. At the age of three, she ran into a spigot, which further impaired her vision. However, she was not completely blind at the time. Her biggest trouble was reading from far away, so she remained in elementary and middle school without much aid aside from reserving a spot at the front of the classroom. Harper calls herself a “high-functioning blind person.”

It wasn’t until high school that Harper’s vision started to become worse and she began relying on different tools to help her with school and everyday activities. She said that at first, she was resistant to some of these changes, explaining that at the time, she had stigmas about how she would be perceived — and how she would perceive herself.

“I could still see, but I’d stay up until three or four o’clock [in the morning] trying to read my textbooks with my face in the book,” Harper said.

Harper finished high school in three years and immediately started classes at community college. She remembers not wanting to use a cane at the time and instead relying on other methods of getting around.

“When I went to college, I had people teach me the way to my classes and I just memorized that,” Harper said. “Then one day, they put up a construction site, and I went around it, but I fell down some stairs. I wasn’t hurt or anything, but I knew that I really needed to learn how to use a cane.”

Soon after, Harper enrolled in the Orientation Center for the Blind in Albany, California, where she spent eight months learning critical skills like how to use a cane or a guide dog, how to read braille and how to cook.

Although she retained some vision at this point in her life, Harper remembers the instructors at the center making her wear a blindfold so that she wouldn’t rely on any working vision to complete tasks. This helped prepare her for the day when she would lose more of her sight, she said.

That day didn’t come all at once, but rather gradually; words that she used to be able to read up close were no longer readable. When this happened, she was able to use computer software programs that enlarged the type to read some materials, and in 1995, the Job Access with Speech (JAWS) screen reading software came out, which allowed her to navigate technology more easily without relying on sight.

Harper said that while she was able to find ways to complete many tasks without relying on sight, she had always been embarrassed to be left out of a lot of sports because people assumed she couldn’t play very well. While in Albany, though, she was also introduced to what she calls “modified sports,” launching her competitive downhill skiing career.

Sports, Harper said, gave her back confidence that she had lost as her vision began to decline.

“At the center, I found skiing,” Harper said. “I tried every activity. I did everything.”

Harper explained that during downhill ski races, athletes with visual impairments ski with a companion skier who tells them where the obstacles are in their path. From her early skiing days in Albany, she went on to win a bronze medal in the 1985 National Handicapped Ski Championship — beating skiers from around the country and the world — and still skis today.

Harper continued to pursue her skiing dreams while taking college classes and eventually beginning to work as a transcriptionist. She also began giving speeches at conferences and events about her life and experience, through which she made connections that led her to her career at an investment firm. Harper became a successful financial wealth advisor, but despite her success, her disability still challenged her confidence.

“I wouldn’t let any clients meet me in the first year because I was afraid that they’d wonder how or if I could do the job,” Harper said.

Without a college degree, Harper became a certified investment management analyst (CIMA) and a senior vice president at Morgan Stanley, a global investment and wealth management company. She also served on various boards and committees for organizations that support the blind. Now retired, she serves as a board member for LightHouse for the Blind and Visually Impaired, a nonprofit that provides work and trade training to those who are visually impaired.

In addition to continuing to ski, Harper is currently training for a triathlon. She also documents how she completes her everyday activities as a person who is blind on her budding TikTok and Instagram accounts.

Her son, Shiya Solodoff, 20, has always been impressed with his mother’s independence and drive. He said that she knows how to do more than most sighted people do.

“She’s always finding a way to try new things,” Shiya said. “Whatever it is, she’ll find her own way to do it. If it’s something that you’d imagine is harder for somebody who is visually impaired to do, then she’ll want to try to find a way to do it even more.”

This “drive for life,” as her daughter Sarena calls it, is one of the reasons so many people are drawn to her — including her current husband, Mike May.

“One of my favorite things about [Harper] would probably be her tenacity,” May said. “Because, whether you want it or not, she is going to get it done.”

Harper met May, 68, on the ski slopes early in her life, but they reunited in the mid-2000s. By then, Harper had two children and was far into her career. The skiing “hotshot” that Harper had written off on first meeting many years ago was now a successful businessman, she said.

They dated throughout the late 2000s, and in December 2013, they got engaged at Stevie Wonder’s annual House Full of Toys benefit concert, an event that raises money for families in need during the holiday season.

Just before he sidled up to sing “As,” Stevie Wonder dedicated the song to his friend and business partner, May, and May’s soon-to-be fiance, Harper. Stevie Wonder announced the proposal as May got down on one knee and proposed to Harper backstage at the concert.

The two know Wonder through May’s work on an app called GoodMaps that assists with indoor navigation for those with visual impairments.

May lost his vision completely at three years old due to a chemical explosion, but in 2000, he underwent a stem cell transplant procedure that partially restored his sight. Now, he can see figures, especially when they’re moving. This, coupled with Harper’s ability to see and read high-contrast objects and words, made them a perfect match, May said.

While having a visual impairment can add a myriad of obstacles to life, Harper and May continue to speak at conferences on accessibility and have successful careers. They travel around the country and the world to attend conferences — bringing their trusty guide dogs Yuli and Jonnie with them.

Harper and the people in her life stress the importance of supporting the visually impaired. Early in her life, Harper said that she was embarrassed by her disability, but once she learned how to work with it and look at life differently, she gained confidence that helped her to excel.

“People assume that the things that visually-impaired people do are by default lesser than things that sighted people do,” Sarena said. “Often, blind people can do things way better than sighted folks.”

In fact, Sarena said that while May has trouble reading and writing, he almost always beats her in ping-pong because he can see the movement and is more in tune with it. Shiya has also noticed that his mom uses her other senses to perceive objects and figure out how to do new activities.

Harper welcomes questions about how she does things, whether that’s cooking, skiing or being a mom. She said that sometimes she is overwhelmed by the need to constantly educate others on how able she is, but that asking about how she does something is better than assuming she is unable to do it.

“Don’t assume [people with visual impairments] can’t do something,” Harper said. “We find a way. There are tools we use to function just like everybody else — sometimes even better.”