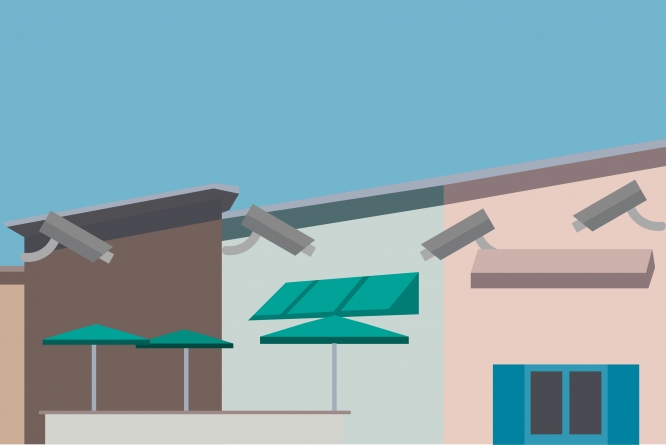 The Davis Police Department said it is considering installing security cameras and license plate readers in public areas around the city in response to a recent uptick in property crimes.

Police Chief Darren Pytel introduced the possibility of public security cameras in a City Council meeting on Dec. 3. He began by outlining crime statistics in the city over the past five years, noting that crime levels in Davis have remained relatively stable. Reported violent crimes in the city — including aggravated assault, homicide and rape — have decreased over the five year period, according to Pytel. Certain property crimes, such as larceny and theft, show a minor increase in the statistics, however.

“We have seen an increase in theft or larceny in the past year,” Pytel said. “We’ve been trying to figure that out [and] study it more.”

Particularly concerning, Pytel said, was the series of armed robberies that occurred in Davis during fall 2019.

“The series we’ve had recently is different,” Pytel said. “We haven’t had carjackings in over five years, and just over the past month or so we’ve had two — and they’ve been involving armed suspects, and our UC students have been the victims.”

Pytel said that some arrests had been made in connection with the robberies, and investigations are ongoing. Some of the crimes have been connected to “renewed gang activity” and violent crime centered around Woodland and West Sacramento, according to Pytel.

Pytel also pointed to the string of “very brazen” laptop robberies in downtown coffee shops that occurred in late 2018 and early 2019. The Davis Enterprise reported a recent strong-arm laptop theft at Philz Coffee on Dec. 29, 2019.

The Davis PD put forward two proposals to the council for increased crime prevention. First, Pytel suggested that the police enroll in an online crime-mapping and data analysis tool called Accurint Virtual Crime Center, which would allow Davis police to share crime data with other law enforcement in the Greater Sacramento region.

The second proposal was a “Remote Public Safety Camera System” (RPSCS), a series of surveillance cameras placed in public parking lots and potentially some roadways and intersections that police hope will act as a crime deterrent and a tool to assist investigations. Davis already has two such cameras, according to a staff report, but with some technological limitations.

“The two existing cameras can be used for relatively short periods of time because of their limited storage and power capacity; they are not designed for long-term use at a single location,” the report read.

Pytel said that the cameras could help compensate for what he believed was an understaffed local police department. He acknowledged the city’s budgetary concerns and said that the RPSCS offered a less expensive alternative to hiring more police officers.

“I’m not here asking for more cops tonight,” Pytel said. “But I do think that some of the conversations with the Remote Public Safety Camera system have to include that this is a new, emerging way to use technology to increase our eyes in the sky and to monitor areas where we simply don’t have the personnel to do it.”

The RPSCS does not include face recognition technology, Pytel said, but is capable of license plate recognition (LPR). He said LPR technology is particularly useful for identifying stolen cars — a function that would assist police in their ongoing carjacking investigations.

Echoing a concern put forward during public comments, Mayor Brett Lee asked Pytel whether the RPSCS could be used to track minor violations, such as unpaid parking tickets and expired registration. Pytel said the proposed LPR system could be used to alert police to cars with unpaid tickets, but a use-policy could be developed to prohibit using the system for this purpose.

Lee and the council expressed support for the recommendations, with the caveat that an appropriate use-policy could be developed to strike a balance between safety and privacy.

“I’m very supportive of investing in some camera systems, and I think we can find a path forward that is suitable to maintain our civil liberties,” Lee said.

The council requested that the Davis PD produce a proposal regarding the cost and use-policy of cameras and LPRs before further consideration.