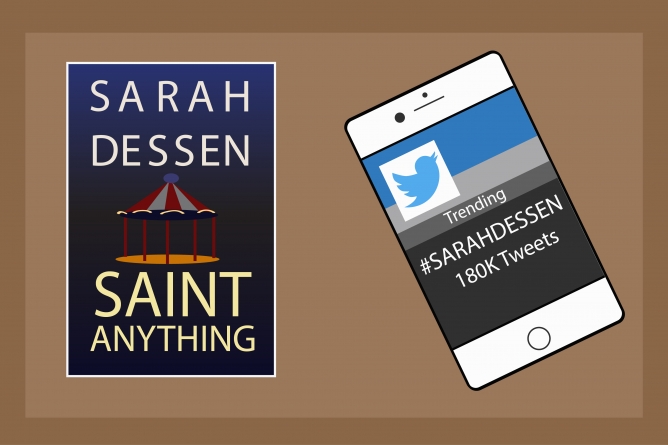 Art should invite response, both positive and negative

I’m not an avid reader of young adult literature anymore, but reading YA was a rite of passage for my friends and me, especially the YA books of Sarah Dessen. By the time we left high school, we read just about every book that Dessen had written up to that point. I loved her books because they were sweet stories featuring complex themes and relationships that made great and enjoyable reads.

Dessen slowly began to fall off my radar over the past year as my interest began to shift to other authors and books. But last month, she caught my attention again for the weirdest and most unexpected reason: a Twitter spat with a Northern State University alumna.

Brooke Nelson, a 2017 graduate of Northern State University, became involved with her campus’ Common Read program in her third year of college. Every year, a committee of students and community members chooses a book for first-year students to read together. During Nelson’s third year, the book chosen for the Common Read was “Just Mercy,” a powerful book about America’s justice system written by lawyer Bryan Stevenson.

The Twitter drama began when Dessen somehow came across an article in the Aberdeen News, in which Nelson recalled her opposition to adding Dessen’s novels to the Common Read program.

“She’s fine for teen girls,” Nelson said in an interview with the Aberdeen News. “But definitely not up to the level of Common Read. So I became involved simply so I could stop them from ever choosing Sarah Dessen.”

An upset Dessen went on the defensive and shared this article on Twitter.

“Authors are real people,” Dessen said in a since-deleted tweet. “We put our heart and soul into the stories we write often because it is literally how we survive in this world. I’m having a really hard time right now and this is just mean and cruel. I hope it made you feel good.”

Even though I don’t read Dessen’s books anymore, I still believe there’s immense value in the kind of stories that YA authors like Dessen share with their young, often female, readers. It’s understandable that as an author and storyteller, Dessen could have been hurt by Nelson’s criticism. But that’s what happens when you write — there are people who connect and fall in love with your stories and others who hold more critical, but equally valid, opinions of your work. The intent of publicizing one’s artistic work should be to elicit a response, whether it be positive or negative. Art is meaningless if its audience is indifferent toward it.

I was shocked to see the reaction on social media by other authors whom I love and admire. Writers and novelists such as Jodi Picoult and Roxanne Gay tweeted their support for Dessen. But these tweets, most of which are now deleted, had either completely missed the point or had taken a disturbing turn.

I understand that some of these writers might have been concerned with the wider issue of how YA novels receive undue criticism. But their responses also took a very different turn from what Nelson might have originally meant — Picoult didn’t see Nelson’s criticism as a strongly formulated opinion as much as she saw it as a contributor “to gender discrimination in publishing.”

“To not speak up about this incident isn’t just demeaning to Sarah,” Picoult tweeted. “It’s demeaning to women, period.”

Picoult’s response was disappointing to say the least, but it was more disappointing that other popular authors such as Siobhan Vivian went so far as to use profane language in disapproval of Nelson’s quote.

This felt like some sort of parallel universe where things made no sense to me. Dessen and these other authors’ conduct on Twitter was disturbing. I couldn’t wrap my mind around how authors — whom I respect and admire — could use social media in such a destructive manner in order to shame a college student for expressing her opinion. This entire debacle would not have escalated in the way it did without Twitter.

When Nelson talked about her involvement in the Common Read program with the Aberdeen News, she was simply sharing her opinion on including Dessen’s novels in the program. It’s clear that Nelson is thoughtful and critical of the content she consumes. She’s the kind of reader who should be celebrated and praised, not shunned. How Dessen and other authors responded on Twitter wasn’t just wrong, but irresponsible. As writers with large followings, they’re supposed to be able to take, and even understand, the criticism that comes their way. Instead, Dessen decided to take the matter to Twitter and create a mess out of a misconstrued quote.

It’s understandable that these female authors probably felt the need to defend a genre of writing that is subject to baseless, misogynistic criticism. But as important of a conversation as this is, it wasn’t one that belonged on Twitter.

As disappointing as their reactions were, I can’t say that I’m inclined to boycott these authors or their books. It’s important that Dessen and others understand the impact and the gravity of their social media interactions. But it’s equally important that we, as a society, understand that individuals should be allowed to share their thoughts and ideas without being rebuked for holding unpopular opinions.