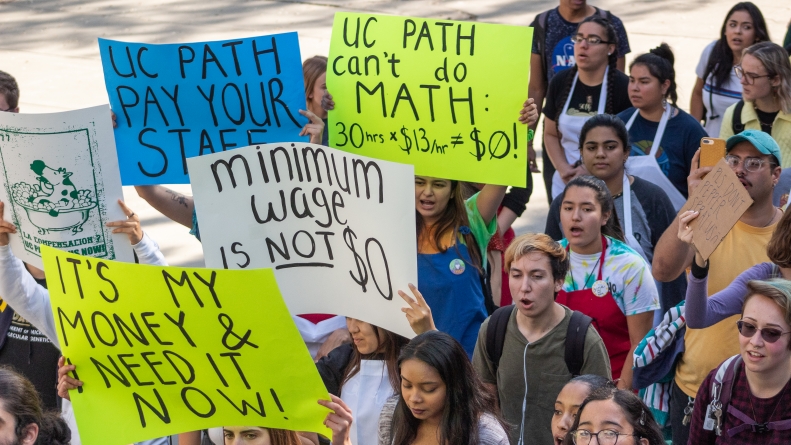 Photo Credits: QUINN SPOONER / AGGIE. Workers from Coffee House walk out from their shifts on Thursday, Nov. 7, 2019 in protest of pay issues resulting from the transition to the UC Path payroll system.

Despite student protests and large-scale backlash, as many as 50 students had not received paychecks for the entirety or part of Fall Quarter by the time the term ended. Although campus leadership assured that students’ paychecks were coming, no official date was released for the arrival of these paychecks before the quarter ended. According to recent accounts, all payment issues have been addressed by now.

In addition to issues regarding delayed and incorrect paychecks, UCPath’s employment processing freeze that lasted until Oct. 28 has also had negative impacts across campus. Jeff Flynn, the Unitrans general manager, commented on how the shortcomings of UCPath impacted both student employees and riders during Fall Quarter. Due to the hiring freeze, Unitrans failed to hire new drivers for Winter Quarter in a timely manner. As a result, student employees and riders are expected to bear the brunt of UCPath’s failings in the upcoming quarter.

“Unitrans had hoped to introduce additional Winter Quarter capacity buses — when two buses operate together on one line at the same time — to help reduce pass ups, improve arrival times to campus and reduce crowding when ridership is highest,” Flynn said. “Unfortunately, the class of approximately 20 drivers that we tried to hire in the last week of August was delayed until the middle of Fall Quarter due to the transition.”

Because of this, drivers will not complete mandatory training before the start of the Winter Quarter. Students should expect increased delays, overcrowding and additional pass-ups going into Winter Quarter.

In addition to impacting Unitrans riders, currently 20 Unitrans student employees have not received paychecks for one or more pay periods during Fall Quarter, according to Flynn.

More than a month after UC Davis released a statement on Nov. 7 expressing dismay at some students not receiving paychecks, some students continued to experience ongoing issues. This statement, which came on the heels of a student-employee walkout, said, “we are dismayed that some of our student employees have not received their pay in a timely manner and agree this is unacceptable. Chancellor May has directed that all student employees be paid what is owed them immediately.”

In a letter to the editor, Christine Lovely, the associate vice chancellor of human resources and Matt Okomoto, university controller, offered a differing opinion.

“Payroll wasn’t perfect before UCPath and despite our best efforts, pay errors will continue to occur,” Lovely and Okomato said. “With an implementation of this scale (nearly 40,000 paychecks), there are bound to be issues.”

Despite having almost two years to prepare for the upcoming transition to UCPath — and given that five other UC campuses have already implemented UCPath, several of which experienced many of the same issues with payment — more than 800 faculty, staff and undergraduate employees have experienced issues since the transition on Oct. 1 according to a statement from Chancellor Gary May.

Initially claiming they were not aware of ongoing issues with pay as of the time of writing, Lovely claimed the inquiry made by The California Aggie caused her team to discover more existing issues.

“We discovered after your inquiry that there were still some issues outstanding,” Lovely said. “Most of these issues were not caused by UCPath, but the implementation of UCPath revealed that some of our local onboarding practices, timekeeping processes and start date decisions were not in keeping with best practices and wouldn’t work with UCPath.”

In light of recent issues involving pay and threats from student employees to pursue legal action, the Office of the Vice Chancellor of Student Affairs has assigned additional resources to address issues with student employment processing.

Emergency paychecks seem to be the main tool to address students’ issues with accurate and timely paychecks. Lovely alleged that the school has been more proactive than a number of students in correcting paycheck issues. Among the emergency checks issued, Lovely stated that 43 checks are still awaiting student pickup.

In the last month alone, more than 300 emergency checks have been issued. As of the time of writing, 50 students still have pay outstanding, according to Lovely. Among those, 17 emergency checks were issued during Finals Week. For some students, paychecks were set to available by Friday, Dec. 13, the last day of Finals Week before Winter Break. For others, Lovely expected issues to be resolved the week after finals.

In response to the widespread failure of the UC system to pay employees on time across UC campuses, California Governor Gavin Newsom signed Senate Bill No. 698 into law, that will allow impacted student employees to seek legal compensation. Therefore, it is in the best interest of UC leadership to resolve all existing pay issues before the end of the calendar year because the UC system will no longer have legal immunity from wage theft penalties as early as Jan. 1, 2020.

While UC Davis has only recently been affected by UCPath payroll issues, this bill was originally introduced in Feb. 2019 after similar issues occurred at all other UC campuses where UCPath was introduced. For other UC campuses and thousands of student employees, this bill will go into effect too late to provide any legal compensation. For some at UC Davis, however, they will have the opportunity to protest late paychecks in the coming quarter.

Students experiencing ongoing issues may be impacted by UCPath’s planned shutdown from Dec. 9-18. During that time, two additional UC campuses, UC Irvine and UC Santa Cruz, are scheduled to be incorporated into the UCPath system. This will add the total number of employees served by UCPath to 164,694, according to their website. With ongoing issues for many at UC Davis, support during this window will be limited.

With no institutional changes made to UCPath since its implementation at UC Davis, it is unclear what to expect with UC Irvine and UC Santa Cruz adding to the number of employees reliant on UCPath.