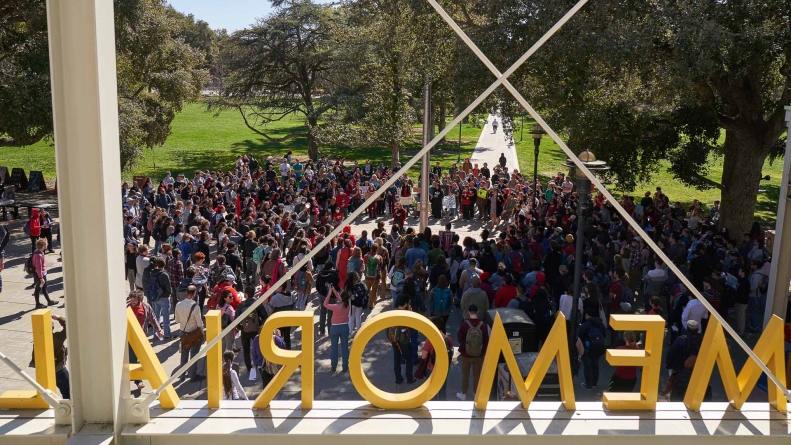 Photo Credits: Justin Han / Aggie. Supporters of COLA rally outside of Memorial Union at UC Davis on Monday, March 2 to demonstrate against the actions of the UC Santa Cruz, administration which fired dozens of UC Santa Cruz graduate students from their TA positions for striking.

Negotiations between United Auto Workers (UAW) 2865 and the UC that took place during the month of March have resulted in concessions for the 82 UC Santa Cruz graduate student workers fired on Feb. 28. Yesterday, UAW 2865 announced in a press release that UCSC would allow fired workers to get a Spring Quarter appointment if they turned in their Winter Quarter grades.

This follows a previous concession UC made to the fired workers on March 16 — they would have their health care coverage reinstated.

Kavitha Iyengar, the president of UAW 2865, said that the union felt it was crucial to do everything it could to preserve jobs, given rising unemployment around the country amid the COVID-19 pandemic.

“Obviously, it is up to each affected individual to choose whether or not to be reinstated, and we respect each person’s choice,” Iyengar said in the March 30 press release.

UCSC Cost Of Living Adjustment (COLA) organizers responded today with a counter-offer, saying they were unable to respond to the offer without clarification regarding compensation for graduate students who could not find appointments or had classes removed. Strikers are currently using a flowchart that delineates the circumstances under which they will submit a student’s grade.

“The context of the global COVID-19 pandemic has only intensified the urgent need to make fired workers whole,” the organizers wrote. “The University of California cannot remain content with a wishful vision of ‘online business as usual.’ […] We are open to negotiation, as we have expressed and pushed for throughout this strike.”

They said they expected a response by Friday at 11:59 p.m.

In a statement addressing UC hirings for Spring Quarter, the UC Office of the President (UCOP) said campuses hired lecturers and academic student employees before federal, state and local COVID-19 mandates, which led the UC to transition to remote instruction for the remainder of the academic year.

“As the current public health crisis rapidly evolves, […] UC is discussing with all of our unions the impact of COVID-19, including the impacts of shifting to remote instruction and of closing various campus facilities such as research labs,” the statement said. “The University is holding these discussions to listen to concerns from union members, which should not be misconstrued as re-opening any contracts for negotiations.”

The COLA strike has spread from UCSC, where graduate student workers in support of COLA have been withholding grades since Dec. 9 and all labor since Feb. 9, to UC Santa Barbara, UC Davis, UC San Diego, UC Berkeley and UC Irvine.

Graduate students supporting the COLA movement at UCSB are on a full strike. Supporters at UC Davis, UCSD and UC Berkeley are on grading strikes, with those at UC Irvine is on a social welfare strike, which they announced on March 20. COLA advocates at all 10 UCs, however, have held solidarity actions.

These strikes are not sanctioned by the union, since a union strike must be authorized by a two-thirds vote of all union members. UAW 2865 is set to hold a Unfair Labor Practice Strike Authorization vote in early April, as it announced March 4.

Though UAW 2865 has shifted gears to discussing labor protections for UC workers in the wake of COVID-19, according to Ethan Hill, the recording secretary for the Los Angeles unit of UAW Local 2865, the union is still “vociferously organizing around COLA.”

“Wildcat activists haven’t been following those procedures [of voting to sanction a strike], but we all have common interests,” Hill said. “We are obviously still [organizing around COLA] under conditions of COVID-19, but those problems overlap a lot.”

Graduate workers in support of the movement echo that sentiment. Now that all UCs will be finishing their academic year remotely, living conditions become working conditions for students, faculty and staff alike.

The COLA movement is prefaced on the idea that all UC graduate students are cost-burdened, meaning that they spend over 30% of their paycheck on rent. Those who support the movement advocate for campus-specific COLAs, which are meant to bring them out of rent burdens. They say that the 3% annual salary increase their contract gives them isn’t enough to make up for rising costs of living across California, where over half of renters are cost-burdened.

A Gallup poll conducted online from March 20–23 found that 38% of part-time workers saw their jobs cut, hiring frozen or hours reduced due to the pandemic. Graduate students who work second and third jobs to bring themselves out of their rent burden will experience increased financial struggle.

This motivated UC Berkeley’s COLA movement to dedicate its first week on strike, which began March 16, to being a social welfare strike.
In a press release, UC Irvine’s COLA movement said its strike means “conducting business/class/work as usual but instead will be focusing their efforts on tending to the social welfare of all UCI students and workers.” It said the strike was driven by knowledge that the public health crisis highlighted inequities among undergraduate students and the added labor for graduate students converting classes to an online format.

In a previous discussion between UAW 2865 and UC’s bargaining teams, the UC’s head negotiator reportedly said it was “a privilege” for graduate students to work for the UC.

Ashley Teodorson-Taggart, a cultural studies Ph.D. student at UC Davis, has previously discussed COLA with her students while serving as a TA for her Winter Quarter class and participated in teach-ins, marches and sickouts.

This is her last quarter before taking her qualifying exams. Her partner is also a TA and they have five children, all of whom are in different grades.

Teodorson-Taggart said she — and other graduate students and professors — used spring break to get up to speed with the online platforms they will be using in Spring Quarter.

“There is no such thing as compartmentalization — [we don’t have] childcare, so it’ll just be a lot of headphones and laptops,” Teodorson-Taggart said. “The kind of precarity that exists right now is something graduate students go through even without the pandemic, so it’s important for them to have some kind of financial security.”

Teodorson-Taggart and her family recently bought a house and may have the luxury of social distancing, but their situation isn’t common for graduate students. The UC Irvine press release noted that the COVID-19 pandemic increased risks for many students living in “cramped or inadequate housing conditions due to low wages,” who couldn’t practice social distancing.

UCOP’s statement said the UC’s “highest priority” is the health, safety and well-being of all its community members, adding that it was sympathetic to cost of living issues, especially housing.

The Public Policy Institute of California said in a 2020 report that 13.4% of California rental units were overcrowded — more than twice the national rate and the highest in the nation. In Davis, a $1,003 monthly rent — a 5.1% increase from 2019 — is the average. The city has a 0.6% vacancy rate.

Emi, who requested her last name be withheld due to privacy concerns, is a first-year mathematics graduate student at UC Davis. She shares an apartment with three other people and pays over $1,000 each month.

Her landlord doesn’t allow subletters, so if she wanted to leave early she would have to break her lease. This quarter, she said she’ll be working in an apartment with a constant stream of ants, adding that both she and her cat have previously found mice in the apartment. To move to Davis from her undergraduate program in New York took all her savings.

“I’m one minor medical emergency from having nothing,” Emi said.

Emi said she came to Davis because, during recruitment, the mathematics graduate program marketed the city as having a “friendly, collegial environment where graduate students were valued.”
Of the financial and mental toll research, teaching and grading has taken on her, Emi said, “It says a lot that UC and academia says ‘This is what you have to do to do this work.’ It’s exploitation when it’s convenient.”

This exploitation is particularly apparent in STEM research, according to Anthony Aylward, a COLA supporter and bioinformatics Ph.D. student at UCSD.

Researchers have written about the number of Ph.D. students in STEM increasing, since they can perform valuable scientific research for very little money. Yet, they say there isn’t a proportionate expansion of jobs that Ph.D. students can enter into after they finish their programs.

“The university pays us more than humanities students, but we still have our own kinds of stresses,” Aylward said. “We came here [to the UC] because we wanted to be deeply invested in the work that we’re trying to do. But at some point, if you have a huge spike of living all across the state, that becomes a problem and detrimental to that work.”
Emi believes the COLA movement isn’t just about the raise graduate students will get and the mental space it will free up for research. She hopes achieving a COLA will be a preliminary step to changing higher education, and said academia, more broadly, was a “site of violence and dispossession” built on the displacement of [Native] communities.

“COLA is the specific site of violence, but it’s a symptom of a broader problem,” Emi said. “Research is worth something valuable. No one deserves to be exploited by an institution, and we’re trying to show you can still ‘research’ and learn together in ways that don’t rely on a system based on violence.”

That goal is something the UCSC movement aims to work on moving forward, despite the remote quarter. It’s connecting movements across campuses by holding state-wide General Assemblies and creating COLA “office hours”, where folks can talk with COLA organizers.

Strike University, launched on March 30, is an additional digital initiative created by COLA organizers UC-wide that aims to provide “public education, free and accessible for everyone.”

The UC Davis COLA movement has not announced official plans, but organizers told The California Aggie that they are mindful of the impact any kind of work stoppage will have on students, given the differing amounts of access people have to the Internet and housing.

“We are committed to organizing for a COLA and are also looking to support mutual aid efforts in the area,” UC Davis COLA said in a statement. “We believe that the fight for a COLA and the need to address the precarious conditions facing those most oppressed in this country during a pandemic are related. This means that we have to organize for people’s causes as a whole, not just for our own.”

Teodorson-Taggart agrees, saying the movement was particularly resonant in advocating for workers’ rights through holding those in power accountable for those who move in and out of public education, especially since “the world is shifting day by day” due to the pandemic.

“A lot of the changes that may happen by and large won’t impact current grad students,” Teodorson-Taggart predicted. “But I’m not participating in [this] movement because I have any anticipation [that] things will get better for me in terms of compensation — I want to leave something that’s sustainable for people who fill those roles in the future.”