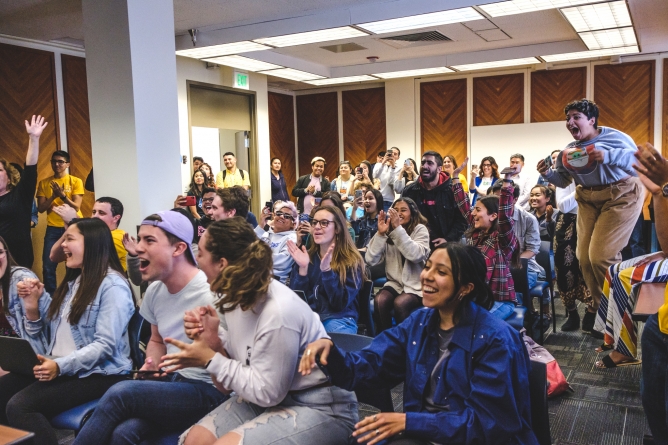 During this past Winter Elections cycle, ASUCD saw the largest voter turnout in its recorded history. The association also saw a slew of resulting election violation accusations, with both the independent candidate and candidates running on either the BASED or Thrive slates being accused of violations. But the system in which these violation points were assigned was called into question by some current and former members of the association.

While Elizalde was only accused of three election violations, Edgar Malagon, the former de facto chair of the Thrive slate and former ASUCD external affairs vice president, claims there were “three complaints with each having five violation examples” — therefore, a total of 15 examples of posting violations against Elizalde. According to the ASUCD Bylaws, one posting infraction is grounds for receiving a violation point.

Asked about these accusations via email, Elizalde said there were not 15 but three accused points and referred The California Aggie to the Elections Committee for comment. Elizalde, who earned the greatest number of votes, was elected and recently sworn in as a senator.

“I don’t think — during the time that I was chair — there were as many [violation points] as there were this election cycle,” Tompkins said.

With this unprecedented voter turnout also came unprecedented violation accusations, leading many to question why none of the candidates were disqualified.

How violation points are handled

Ultimately, despite the unprecedented amount of accused infractions seen this past election, Rodriguez assigned only one violation point to Elizalde. The committee found that “the candidate in question… informed us that they weren’t aware of the policy, but claimed they corrected their mistake after they were informed. Nonetheless, there was clear evidence that the posting policy was broken, which is why we came to the conclusion of issuing a violation point,” according to information posted by SGAO on the third floor of the MU.

“It was up to the candidates to make themselves aware of posting policies and university regulations,” Tompkins said in regards to his view of the decision. “It’s straightforward, it’s accessible, it’s not hard to find.”

Then ASUCD President Justin Hurst, however, said, “intent is more relevant with regards to severity.”

“If a rule is violated, there should be a violation point,” Hurst, the former BASED chair and academic affairs commissioner, said. “If it is a severe violation, I think that’s where intent comes in.”

A question of partisanship in the Elections Committee

At Rodriguez’s confirmation this past February, concerns were raised over how she would remain impartial, given her previous involvement with the BASED slate. In the past, Rodriguez twice ran for Senate unsuccessfully with the slate, but was later appointed Interim Senator with the slate. After that time, Rodriguez said she had detached herself from prospective candidates and disassociated herself from the BASED slate on social media in an effort to appear unbiased.

The Aggie asked sources involved in the association if they believed having the Elections Committee chair appointed and confirmed by the Senate was an exercise of partisanship.

“Oh, of course,” Malagon said. “If Thrive was also picking somebody, there would of course be a bias. Same thing with BASED.”

Moving forward, Hurst, Malagon and Tompkins believe that if the Judicial Council, an unbiased branch of ASUCD’s student government, were to select the Elections Committee chair, that would effectively remove partisanship and bias from the equation.

“In order to get elected, a lot of people form coalitions,” Hurst said. “Even when there have been periods where someone runs as an independent, they usually caucus with a slate. I think if there’s concern with the appointing process, a potential remedy could be shifting who’s doing the appointment. For example, if it was the Judicial Council themselves, that would be a good alternative.”