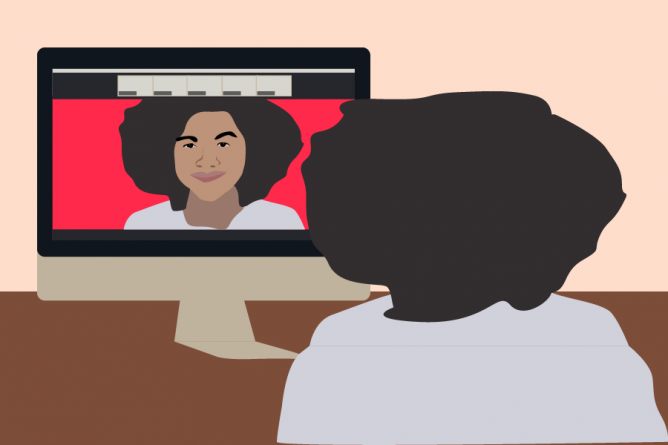 Lack of non-verbal cues, physical tiredness contribute to the phenomenon

Without actually seeing people in person, many people have taken to extensive communication over video through services such as Zoom, FaceTime and Skype. With classes, meetings, happy hours and more spent in such a way, many people have reported increased exhaustion, a phenomenon termed “Zoom fatigue.”

Second-year biochemistry and molecular biology major Aparna Manoj said, over Zoom, one doesn’t get the same nonverbal communication cues. In her experience, when someone can’t see others’ facial expressions and gestures as clearly, there is a stronger dependence on the words that are spoken.

“Since there’s only a voice to engage us sort of, it’s much easier to get distracted, and then even harder to get re-oriented in the call,” Manoj said in an email. “Overall, I just think we need a higher amount of focus and concentration to understand what’s happening with Zoom communication, and I feel that this is really what leaves us feeling so exhausted after a call.

Like Manoj, fourth-year neurobiology, physiology and behavior major Mira Shah finds that video calls and conferences are “much more draining” than in-person interactions, in large part due to lack of nonverbal cues. Shah uses Zoom mostly for classes and said the “already dreadful concept” of participating becomes even more stressful and intimidating since the screen shifts to the speaker. On top of that, an unstable internet connection and uncertainty about how you sound and look can cause even more stress.

Shah described a lab session toward the beginning of the quarter in which her internet connection was poor and she was disconnected from the session. She said this caused a lot of anxiety as she scrambled to reconnect and explain the situation to the TA so she could be placed into the correct breakout room.

“Ever since that lab, I get really stressed out about my WiFi connection, because I wouldn’t know what to do if it randomly disconnected while I was taking the proctored lab quiz we have once a week,” Shah said in an email. “From my use of Zoom, all of these added stressors that come along with virtual communication contribute largely to the ‘Zoom fatigue’ and feeling of relief I experience whenever a Zoom call has ended.”

Shah said she feels the most Zoom fatigue in that three-hour lab class. In addition to the lack of nonverbal cues, sitting in front of a laptop for that long is tiring.

“Besides the physical effects Zoom calls have caused me (stiff neck/shoulders, eye strain, leg paresthesia -from sitting for so long, and headaches), I tend to feel very mentally drained after my labs,” Shah said. “[I] have noticed that my productivity is at its lowest on the days I have lab.”

Manoj said she started experiencing Zoom fatigue a few weeks into Spring Quarter. Classes and meetings were suddenly more tiring; 50-minute classes that flew by in person were draining and left her feeling unproductive

“Now, these same Zoom meetings are something I have to brace for,” Manoj said. “They feel so much longer and I end up feeling super drained after. Especially if it is a live class, I end up feeling so exhausted after the call, and I feel like my brain can’t listen to anything anymore and absorb information. I end up feeling super unmotivated to continue with work afterward, and my overall mood becomes pretty irritable.”

Both Manoj and Shah have heard from their friends about having difficulty staying engaged. Manoj added that with remote instruction, it’s harder to understand material, and there’s a common lack of energy to clarify the confusion at a later time.

Manoj is currently the programming coordinator and incoming co-director of Mental Health Initiative (MHI), and she says that counselors and community members she’s encountered in that context have helped her validate that Zoom fatigue is real; it’s not just laziness.

“It helped me see [Zoom fatigue] as something I can try to cope with and that’s when I started trying a lot of coping strategies I’ve learned with MHI,” Manoj said.

Being able to see oneself on screen is also something that contributes to feelings of Zoom fatigue — Shah says that it has a negative impact because it’s something that wouldn’t be dealt with in a “‘typical’ social setting,” and especially not in class.

“Even personally, I feel the need to constantly check my square on the Zoom call to make sure I look okay, and that my room in the background isn’t cluttered or messy,” Shah said. “For me personally, having my camera on is bringing my whole class home with me, and it makes me extra self-conscious about how I am presenting myself and my space. This can be especially distracting, as it is for me, and takes away from learning experiences, making the Zoom call feel more like a 3hr long performance instead of an informative class period.”

Manoj agrees, saying that everyone is self-conscious and seeing herself on screen makes her more aware of her appearance and thus increases her nervousness.

“I feel like I have much less hesitation when I have in-person interactions because I’m not as aware of how I seem to the other person/people,” Manoj said. “On Zoom, sometimes having your camera on means having this constant reminder of your appearance and how you appear to other people. It takes more energy to pay attention to yourself and your insecurities while in a conversation and again contributes to more distraction and it’s harder to focus on the actual interaction.”

Psychology professor Chris Hopwood, who emphasized that his take on the issue is not based on specific expertise and rather reflects a combination of his intuition and “somewhat informed opinion,” said there are likely individual differences in how people react to communication over video.

“I have not been fatigued personally, although I do think it poses other challenges,” Hopwood said in an email. “As an instructor, I typically use the emergent feeling in the room to judge things like my pace, whether I need to go over things again or move on, and whether there are certain people who seem to not be understanding the concepts I am trying to teach. That is missing in video, and my response seems to have been to slow down. I am not sure what impact this is having.”

Hopwood said a lot of this varies based on the individual. In fact, Hopwood said people he has talked to have been so bored that they would enjoy more Zoom meetings. One suggestion that may help limit the impact of fatigue on retention is watching recordings of courses multiple times.

Shah’s suggestions for avoiding the strains of Zoom fatigue include changing the place from which you take Zoom calls, being sure to rest and recharge and try not to attend classes from bed.

“For anyone seeking advice on how to deal with Zoom fatigue, I would recommend blocking out space in your schedule right after Zoom meetings/classes to make some food, take a nap, engage in art — listen to music, paint, play an instrument, etc. — go outside (even if it’s just in a backyard or around the neighborhood!), and/or do anything that brings you peace and allows you to recharge,” Shah said.

Even with Manoj’s attempts to stave off Zoom fatigue — having a snack, staying hydrated, minimizing calls that are close to one another, taking a break to listen to music and getting some fresh air — it’s been difficult to maintain productivity.

“I think it’s just important to remember that everyone is having some sort of difficulty with the current learning situation, and just try to be kinder to yourself,” Manoj said. “It’s completely okay to feel Zoom fatigue, and it’s more than okay to take time for yourself to improve your energy and mood.”